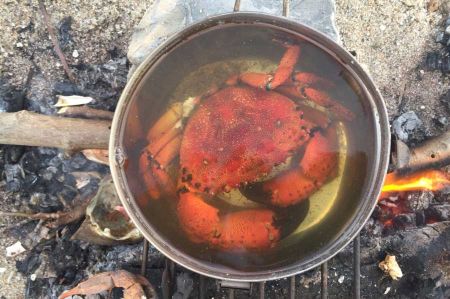 Philip, Micha and John had actually left during the morning for fishing between Thessalonica airport and Perea. After some preparations at the camper stop Zampetas, the departure to the beach had been approached on foot, which probably should take half an hour, since the route was not clear.

Already the day before the two had been heading for the airport, also to find a possible passage along the bay into the city, which turned out to be impossible. The visitor to the city center of Thessalonica is still just the bus to the shopping centers at the outskirts, then to continue with the city bus is recommended if not using own motorbike or scooter. Alternatively, there are usually the multiple daily ferry services between Perea and Thessalonica (approximate departure times of the ferry) at the beginning of May. 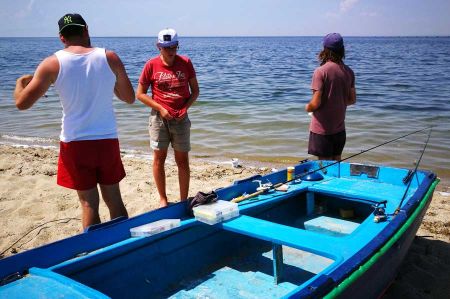 Since we also had some things to do in Perea, we wanted to visit the two in the course of the day, of course, to meet with them in the case of appropriate success to be able for preparations of a common night meal. However, there was no reason for that, because so far the two fishermen were doomed to failure. No fish wanted to bite, despite visible shoals of fish in the water. Well, after all, the two had at least caught a squid whose horn-shaped mouth resembled a parrot's beak. There are ten tentacles around the mouth, of which eight are short and completely filled with suckers. The two other tentacles are slimmer, strongly elongated and have a widening at the ends, which is also filled with suction cups. This allows squid to catch their food such as fish, crabs and other mollusks. These arms are also called tentacles. The shorter arms are used to carry the food to the mouth, where it is mainly minced with the beak and the radula.

Too small to be eaten by our friends, this squid should be used as a bait for further fishing, which, as we found out in the evening, was still unsuccessful. The three, in the end, were able to catch some crabs, which was not negligible, a crayfish net was found on the spot and had contributed a lot, which we should learn in the evening in their report. Crabs of different species are also found in the bay of Thessalonica, so we were not surprised to hear that the two had prepared and cooked them at the proper campfire. Crab, with at least 52,000 known species worldwide, form a sub-strain within arthropods, commonly known as arthropods in Latin, which are characterized by a great variety of forms and have been adapted as evolutionary development to different habitats and lifestyles.

Crabs of all sizes - crustaceans say the foodies 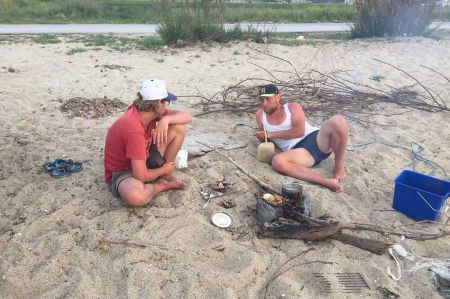 Crustaceans, with a few exceptions, can be found everywhere in rivers, lakes or in the sea; because they have settled all the habitats of the sea and fresh water. Among the crabs there are also some species that can live on land, such as the palm thieves among the hermit crabs or the beach crabs. However, these species are still dependent on water, at least for development.

In fresh or salt water, they can be found in any habitat that the sea or lakes and rivers offers. Many species live as plankton in the pelagic (open water), others colonize the water bed, rock crevices, reefs or surf zones. Even under the Arctic and Antarctic ice, they are abundant, and their presence in the Black Sea hot spring area in the deep sea is also well documented. A number of species also live parasitically in and on fish, other crabs and also in terrestrial vertebrates.

Crabs used for food are referred to in the art of cooking as crustaceans, a term that would displease the three fishermen Philip, John and Micha, they are not only about the sport fishing but also as a real source of food for their household budget during their travel to save money.