Although it has long been set for sun and summer, sometimes there is rain and storm at Lake Ohrid, which yet surprised us wearing summer clothes. Just good, if then at least one hot drink is available, which despite wet clothes at least heats up the inner temperature - a hot glass of Salep.

We are well aware of the Salep drink from Turkey for many years, so this very special, very tasty hot drink has spread all over the mountainous (colder) regions on the Balkans during the Ottoman occupation. Salep or even Sahlep is mostly prepared in Turkey, in the Balkans and in the Arab world from the salep powder, which is extracted from the tubers of orchids.

Origin and production of salep powder

The term Salep refers to the dried root tubers of various orchid sorts. These plants have two tubers at flowering, a withered, at the expense the flowering stems has developed, and an undivided, spherical or hand-shaped divided, lobed tuber, from which a flowering stalk develops the following year. 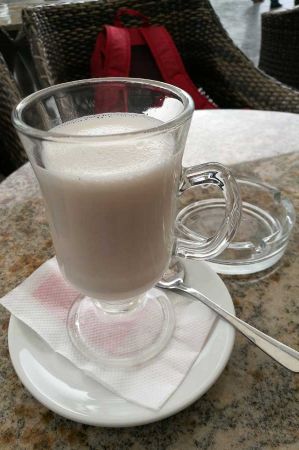 For production, the full-bodied tubers are used after flowering. Freshly harvested, they taste bitter and have an unpleasant odor. After collecting, they are washed and their outer, brown skin is rubbed off. The tubers are then boiled for 20-30 minutes and dried later on. All orchid tubers can supply Salep. Most commonly used were the undivided tubers of Orchid (Orchis morio), Orchid (Orchis mascula), Orchid (Orchis militaris), Orchid (Orchis ustulata) and pyramidal dog root (Anacamptis pyramidalis).
The round tubers are at most 3 cm long and 2 g heavy after drying, very irregular, hard, brittle, yellowish gray, smell slightly aromatic, taste bland, contain 27% cornstarch, 48% Bassorin, 1% sugar, 5% protein , 2% mineral components and other ingredients.

Theophrastos of Ephesos and Dioscorides attributed to the Salep healing powers

According to the doctrine of signatures, Salep (also known as Satyrion) has been considered since antiquity in view of the shape of the two round tubers sitting side by side as an effective means of regaining the power of procreation. Theophrastos of Ephesos and Dioskorides attributed great nourishment to them, which it does not really possess. The Arabs probably brought Persian and other oriental Salep tubers to Europe, but in the Middle Ages they also used the tubers of native orchids. When there were no better drugs, salep tubers were also used as a home remedy for diarrhea. However, it does not possess a drug-like effect.

Today, all of the orchid species mentioned above are protected by national and international laws, which applies in particular to subterranean plant parts. Within the EU, all species of orchids are particularly protected and therefore trading with Salep is prohibited.
As a rule, the powder is mixed with a little sugar and hot milk. The milk is refined by the powder creamy and sweet and, depending on personal taste, added with cinnamon, chopped nuts or pistachios. A delicious cup of Salep on cold days warms from the inside and makes you feel happy and satisfied.