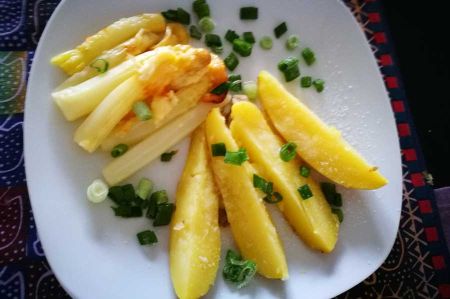 There are no other vegetables with so many anecdotes and myths about them as about asparagus, at least in Germany. Long before the asparagus was used as food, it found versatile use as a medicinal plant.

For example, if you wanted to treat gastrointestinal complaints, bile and liver ailments. In China, Greece and Egypt, a wide variety of wild-growing asparagus species were discovered thousands of years ago already. As applied to cough, bladder problems and ulcers. All plant parts were used, especially the roots, but also the shoots, leaves, flowers and berries. Thus, the asparagus is also an ancient medicinal plant and is considered food of choice, if you want to tackle diabetes and natural problems with the bladder. Today's vegetable asparagus was prescribed for doctors until the 19th century, which today is only reminiscent of its Latin name "Asparagus officinalis" (medicinal asparagus). 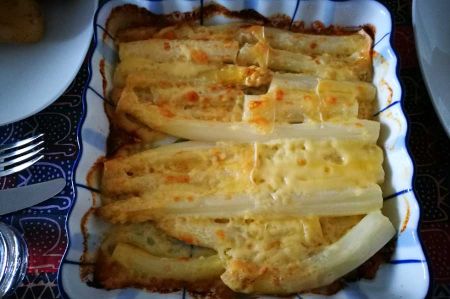 Scholars and gourmets have already written essays on the cultivation and preparation of vegetable asparagus in the pre-Christian era. The gourmet Lucullus, known for his grandiose innkeeper, said: "Only the one who succeeds in serving asparagus without ingredients be able to cook it in the most delicious perfection will."

As a flattery for the palate, the asparagus was only useable after the ancient Romans were able to reduce the very bitter taste due to breeding. This was the birth of the delicious vegetable asparagus. Because of its labor-intensive culture, only rich people could afford it for a long time and today it is still not one of the cheapest types of vegetables. Its taste and numerous health benefits, however, make up the price more than reasonable. In the asparagus season, no other topic is discussed more heatedly, and the weekly asparagus prices sometimes provoke even more than petrol prices.

Many connoisseurs enjoy the asparagus season year after year. Whether asparagus soup or asparagus risotto: The noble vegetables make every dish a delicacy. But did you know that asparagus must be on the plate if you want to get your partner in the mood?

The term asparagus means nothing else than a young shoot. If one did not reap the asparagus, it would develop branched stems with feathery leaflets, small yellow flowers and, in consequence, scarlet, slightly poisonous berries. The genus asparagus contains more then 200 species, edible but only a few. These include the wild-growing spiny asparagus in the Mediterranean or the well-known in our country vegetable asparagus, which was cultivated by the ancient Romans with great devotion. The asparagus contains 93 to 94 percent water, 1.95 percent nitrogen, 0.14 percent fat, 0.37 percent sugar and 2.03 percent other digestible carbohydrates. 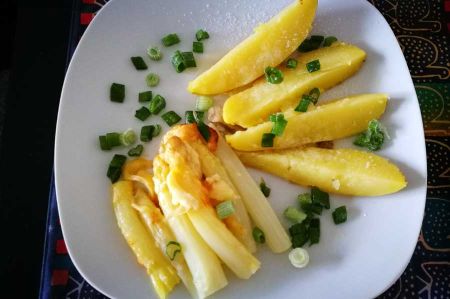 For a long time you only ate green asparagus, because the white asparagus was "discovered" in the 19th century. This happened by chance, because you had put hats made of clay on the asparagus shoots to protect them from animals. Due to the lack of light, no chlorophyll was formed in the asparagus, which kept the vegetables white. Since the white asparagus is very delicate and mild in flavor, it quickly found many followers. Since then, the green bars have largely been dispensed with - and asparagus is almost exclusively cultivated underground. In addition, there still is purple asparagus. The striking coloration arises because the poles are not stung immediately and receive about a day more sunlight. Anthocyanins are being produced, the health benefits of which we have already mentioned for you: anthocyanins protect against cancer. Violet asparagus tastes spicy by these natural dyes and are particularly popular in France.

According to researchers from Garhwal University, asparagus has antioxidant, immunostimulating, anti-inflammatory and antibacterial properties, can increase fertility and prevent or eliminate liver damage.

Bring a large pot of water to boil with about 2 teaspoons of salt, 1/2 teaspoon sugar and a little lemon juice. Cook the peeled and quartered potatoes parallel to it.

In the meantime you can peel the asparagus, removing the woody ends. White asparagus is peeled directly from the head, green asparagus peeled about one hand wide away from the head. The bowls and ends pick up - it can be excellently for preparing an asparagus soup. Simply boil and remove before blending again.

Once the water boils, put in the asparagus and boil briefly. Then immediately reduce the heat. Asparagus should never cook heavily so that the tender asparagus heads are not injured.
Depending on the thickness of the asparagus spears, allow to infuse for a few minutes - this way your asparagus is cooked very gently and has an unsurpassable aroma!
Drain the asparagus spears and brown with the cheese. Who wants to, also baked the potatoes together with cheese.