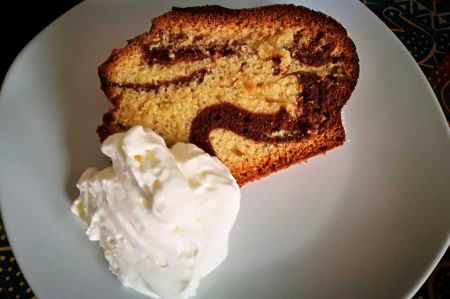 Earlier, before starting with the project, we regularly baked cakes, a time we sometimes missed, so the thoughts were often associated when having a coffee with the desire for freshly baked, homemade cake.

Often the desire for the sometimes so simple and fast recipes came up, which stood for delicious cakes, where ingredients and contents were determined by ourselves. Now almost exclusively in the caravan since the beginning of the travel time, it was often difficult to put these thoughts into practice, so at least our ideas have been. A completely wrong train of thoughts, because there is an oven in the caravan too, .... and a cake can be produced without mixing tools quickly and easily too.

And how delicious, for example, was the homemade marble cake, a little refined with just existing ingredients, which are quite interchangeable, which have given the special taste. Whether as a remnant or other special ingredient. So it was easy to make a first decision for the simple marble cake, which succeeds with little unusual ingredients almost always and everywhere, because butter, sugar, eggs and flour, baking powder and vanilla sugar are also present, even in the caravan or motor home. The only question left is the question of an oven, a question that can be answered with yes, at least for us with the Fendt-Caravan.

So we can start, correct? Box shape or Gugelhupf as a question still stays? 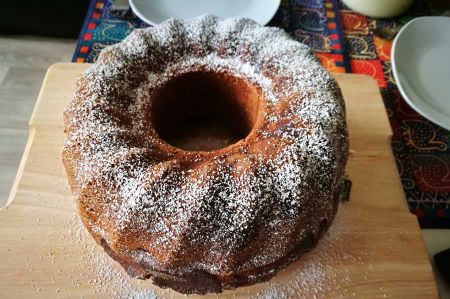 Due to the size of our baking dish (here it is up to the personal taste, whether you choose the box shape or the Gugelhupf shape), we had chosen for:

250 grams of butter
250 grams of sugar
4 eggs
500 grams of flour
1 packet of baking soda
1 packet of vanilla sugar
which were mixed in a mixing bowl until a creamy mass had formed with the addition of a little milk. Within a few minutes, the basic mass of the batter is ready.
Instead of milk, or in addition to it, we have added some whiskey cream liqueur, whose alcohol completely evaporates during the baking process, so the non-alcoholic in this regard, does not worry too much. After all, there is the slightly different taste of our marble cake. Instead of the whiskey cream liqueur you can also try it with other additives, we also liked the addition of some eggnog very well.

The finished batter is then, just a small residual amount stays, filled in the previously well-buttered Gugelhupf case. The remainder of the dough is then mixed with cocoa powder, and we set the amount arbitrarily according to how dark or savory the cocoa taste should be afterwards. It is just important that this amount of dough additionally receives some liquid so that it receives the comparable consistency like the main dough. Whether this is achieved with milk or a dash of whiskey liqueur is up to you. In general, we are not a friend of exact specifications! Something loose the whole thing, but it works too.

The cocoa dough is then filled up on the dough and turned with a spoon into the main dough mass, so we get the marble structure (as in the picture) in a very simple way.

The whole thing then in the oven, heated with gas in our camper, and let the marble cake bake for about 60 minutes at 180 °. The knitting needle is perfect to shows if the baking process is completed. In the absence of a needle, a fork does it too.