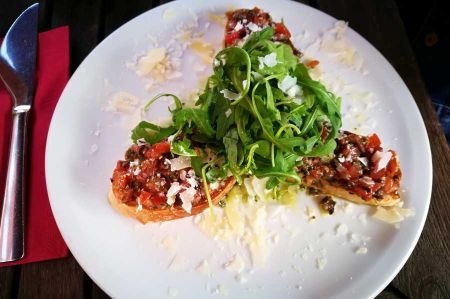 What in Turkish is called meze, with comparable mezze in Persian regions, in Italian are called antipasta, small dishes, often served in small bowls, which are consumed on various occasions.

They can be part of a delicious snack, an appetizer (hors d'oeuvre) or as a dessert part of a meal. In many of the successor states of the Ottoman Empire and its neighboring states in the Caucasus, this food offer or the term and the associated tradition is widespread. True gourmets often abstain from the main course and can be served a larger number of different meze on a tray, from which they then make a selection - why not?

Bruschetta, on the other hand, is clearly one of the Italian antipasti, that is, a real starter. Originally called "Poor People Eating", the "dish" comes from Central and Southern Italy. Actually, only freshly toasted bread, such as Pane Pugliese, which has a fairly hard crust and rubbed warm with a halved garlic clove and then drizzled with olive oil, still peppered and salted at will and immediately consumed.

An already modified, modern form as a real appetizer of Bruschetta is often provided with a coating that consists of some variants depending on the region and preference:

We have 353 guests and no members online