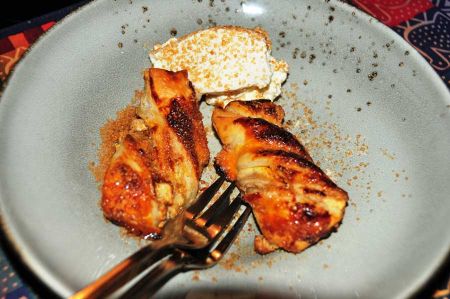 Already during the walk the idea of a lovely afternoon coffee had grown up, maybe a bit of a cake, so our thoughts? Maybe with some cream?

The local bakery was too far away, and the idea of ​​home baking was much more prominent. So what's the quick bake for the coffee?

Quickly then the own supply in the house virtually appeared in front of our eye, in this way we remembered the presence of a roll of puff pastry, apples that were still there, which came in a large pack from Austrian purchase during the last visit to Vienna. The thoughts were already beginning to circle, maybe even refining with whipped cream, brown cane sugar and cinnamon? Especially in the Advent season these ingredients are always in the house, right? 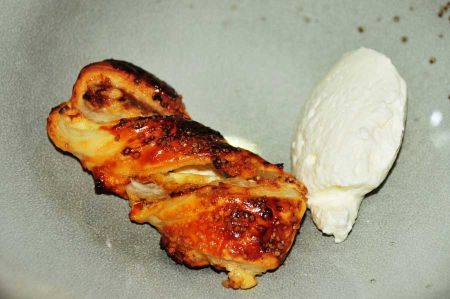 Back at home, the baking tray quickly was at hand, the puff pastry was rolled out on it. In parallel, an apple was cut into small cubes and half a cup of sour cream was spread on the rolled out dough. Now the apple pieces were spread evenly on the puff pastry, a little brown cane sugar and some cinnamon sprinkled over it. Now, about one-third of the puff pastry width is closing from the right and left above the middle section, creating a narrow cake band with filling.

In the next step portion sizes are then cut from the roll of cake, which should be about 3 centimetres wide. The individual pieces are twisted about 2 times around their own axis and then distributed on the baking sheet. Now the single pieces are coated with egg yolk, lightly sprinkled with brown cane sugar and a little cinnamon and off it goes into the oven while the coffee is poured in parallel.

The preparation is completed after just 10 minutes, the baking time is completed even after 12 - 15 minutes at 180° degree inside an oven with circulating air. Whipped cream, simply delicious, especially if still served warm.