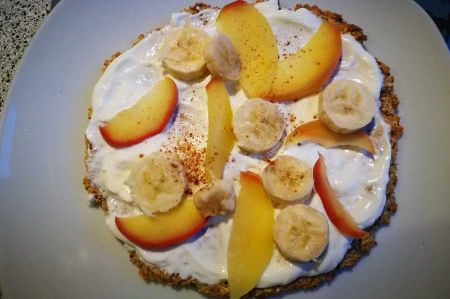 There are still some surprises when you join the breakfast table as a guest and get a mixture of pizza and pancakes, so at least the first impression, served with a fruity fresh edition: oat corn pizza with fruit, so our hostess explained in her first words!

Healthy, that you could notice at first glance, this breakfast will be for sure in any case, if just because of the fruits that literally invited to enjoy. The apples stewed, not bad either. Of course, the question was, "What's that?" Not just allowed, but even desirable.

The basis of this fruit pizza was oat corn loosened with pear syrup which, when mixed with the dough, formed the base and was then baked in the oven. The result was a basically crunchy flat bread, which was covered with a variety of fruits and cream and should form the main ingredient of today's breakfast. Since a toddler at the table, who of course required the same food as everyone else, the apples had been steamed for better consumption for him. This way, the ingredients are preserved, the chewing even without molars much easier. Simply delicious.

Pear syrup - a sweetener for many applications 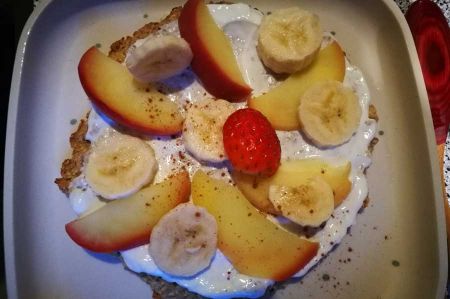 Of course, we are aware of pear syrup as a sweetener, especially as we ourselves often despair of the large amounts of sugar in many foods. Why all these additives and semi-finished products? Especially since there are lot of alternatives.

Pear syrup is prepared under vacuum and during the process won concentrated pear juice, which is now available everywhere in trade, if you do not even make it yourself. Of course, the vacuum is not completely easy to handle, but by this process of relatively gentle production at 50 - 60 degrees, the ingredients are preserved.

Even pear syrup is a heated concentrate, it basically contains no additives and is suitable as a sweetener for already heated pastries, boiled pulps and creams, ie a thickened, deacidified fruit juice with high sweetening power.

In the case of our fruit pizza, the pear syrup not only provided the very pleasant sweetness, but at the same time it was the binding agent for the oat corn, of course from wholegrain, which goes without mentioning.

We should learn about a further use of pear syrup little later, as we talked about a mixture of spelled flour (also again from whole wheat flour), butter and pear syrup, when tasty biscuits were formed. From 150 grams of spelled flour, 100 grams of butter and 50 grams of pear syrup a mixture was created quickly, which was formed into cookies and baked, even for toddlers a delicious and healthy change in everyday life, as soon as the first teeth are ready to use. And all without sugar! And delicious - even for adults!