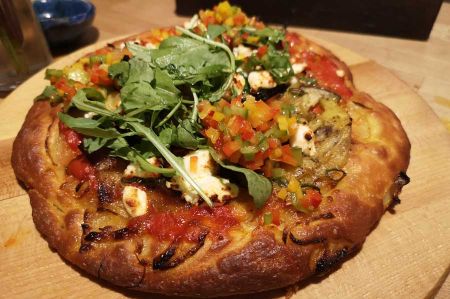 Another day of the trade fair in Poznan had come to an end and once again there was a clear feeling of hunger in the stomach area.

Hiking to the old town and the Old Market for a restaurant? The decision was made quickly and explained in simple words: No, because that's too far and we're too much hungry!

Alternatively use the famous search engine? Or just ask 0ne of the numerous passers-by? The decision was made quickly, because a young couple was heading straight for us. So the question of a restaurant in the vicinity was quickly asked and we received two references to restaurants that are located close to the exhibition centre but are still heavily frequented by locals (in our experience always a good sign). Let's go and try.

A few hundred meters further on, next to a large hotel group, we came across the first of the two restaurants being described by the young couple. A long queue on the stairs indicated that the kitchen had to be of good quality, maybe just not that much expensive, as the audience looked rather young like students. We would have liked to try it, but hunger drove us on.

We went to the second of the mentioned restaurants, also well attended, but with some free places, as the large, open shop windows showed. We will try.

We received the menus and were a bit amazed to come across old Polish recipes that are presented in a new, refreshingly modern style. 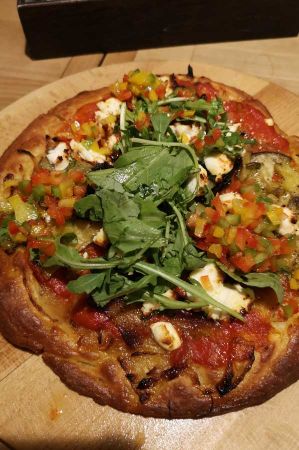 Since there were four of us on the road and we all complained about feeling very hungry, a starter was also announced, which we had already noticed while serving at the next table. So why not give it a try. Said and done. As a starter, the dish from next table, divided among four people.

And we shouldn't be disappointed, because it was a kind of onion pie based on a yeast dough baked with all sorts of fresh vegetables. After baking, some fresh ingredients were added. Crunchy and fresh, simply delicious.

Was there anything to top this?

And then the main course was served. The composition and the way of serving are unusual. 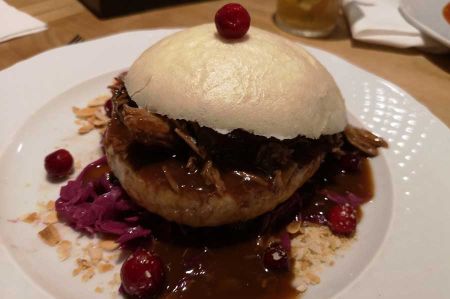 Duck breast cut into pieces, which was seared tasty and crispy with various spices, was served in a sandwich on a layer of red cabbage, which in turn was prepared with apple pieces and cloves. A fast food dish?

Just the contrary. The sandwich was freshly baked and crispy (despite the wheat dough, here I would have liked rye and whole grain), the pieces of duck extremely tasty, seasoned and crispy, and the red cabbage left nothing to be desired. In addition, fresh cranberries (no jam), which could top it all. In short, it was just delicious. We learned that the head chef was already well-known in the city for his sometimes-peculiar compositions.

We were grateful for the young couple's tip and were once again surprised by the excellent quality of Polish restaurants. We can just recommend them.