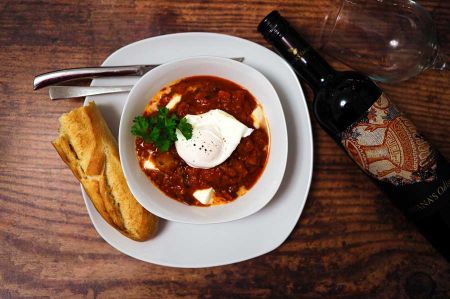 After completing our outdoor presentation, a quick tour of the Ferropolis area, which really extends over the peninsula, so our thoughts, then and to our surprise, another highlight was awaiting us: In a pot around the world - Shakshuka.

At first just a bit surprised what the long stand of beer tables with the many spices, herbs, vegetables and oils at the Van Days was all about, we were quickly informed accordingly: For product presentation of dishes, pots and stoves and also wines from Saarland, some dishes should be prepared, cooked and later eaten in a relaxed atmosphere by passers-by. 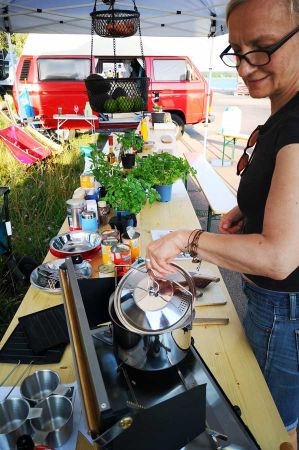 Tonight, the dish Shakshuka was on the program, a dish made of poached eggs in tomato sauce, which was probably imported to Israel by Maghreb Jews and then became a kind of national dish there. The Shakshuka dish is also widespread in North Africa. The dish, which is sometimes referred to as the Israeli national dish and is mainly eaten there for breakfast, probably originally came from North Africa, such as Tunisia, Algeria and Egypt. A clear origin could not yet be assigned.
Modified forms are also common in other countries, such as the so-called menemen in Turkey. In Spain there is the pisto, which is prepared similar to a ratatouille and usually served with a fried egg, in Algeria there is the chakhchoukha. This dish is served without egg, but with semolina, lamb, eggplant and zucchini.
The added spices and other ingredients vary depending on the region. Typical, however, is the so-called “lost egg”, which - whisked - is added to the boiling tomato sauce and then eaten hard or soft, depending on peoples taste. 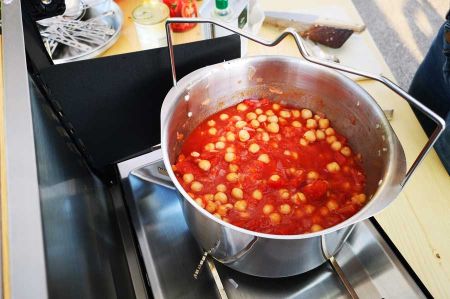 Put a large tablespoon of good oil in the saucepan and sauté the chopped shallot and the garlic. Also add the cumin a little later and fry, then deglaze with the chopped tomatoes and bring to the boil briefly. Now stir in the chickpeas and simmer gently. Season to taste with salt and pepper.
When the boiling point is reached, crack open the desired number of eggs and carefully add them to the hot mixture so that the egg remains as whole if possible and does not melt. Now put the lid on and let it steep for about five minutes. 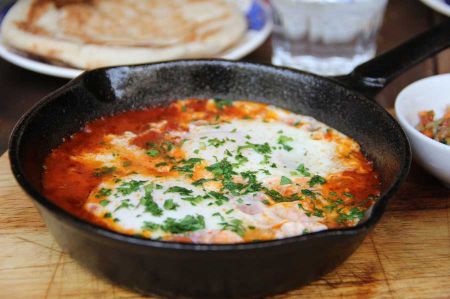 When the eggs have cooked, remove the pan from the heat. In the countries of Africa or the Middle East, flatbread is often served with this dish. If available, please brown the bread on both sides until it is baked through and serve still warm.
Put the Shakshuka on the plates and garnish with the feta cheese, avocado and herbs to taste and enjoy.