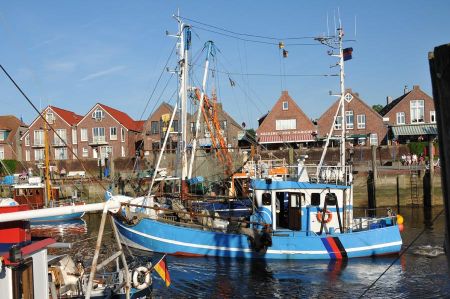 Of course, during our visit with Brita and Gerda to the North Sea island of Spiekeroog, we also talked about North Sea shrimps, the specialty from the Wadden Sea that is well known throughout Germany, which is freshly fished and peeled every day and is so delicious on a fresh piece of bread.

The different names of this specialty are sometimes a bit misleading. The probably scientifically correct name is "north sea shrimp", we better not talk about Crangon Crangon, which probably only very few people know what to do with. In the vernacular one often says crabs or garnet. However, the brown shrimp belongs to the decapod family. 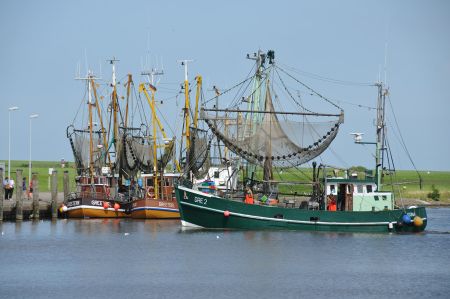 There they were now in the port of Neuharlingersiel on the quay, the shrimp boats. A very impressive picture opened up to us when we looked at the individual cutters, so colorful and beautiful in the setting sun. And ready to sail in time, because shrimp fishing is tide dependent, which means the shrimp fishermen get active when the tide rises. After our return from Spiekeroog, we were able to watch the first shrimp boats leaving the port of Neuharlingersiel.

There are shrimp along many coasts, from the White Sea to the Atlantic coast. However, the shrimp love the sandy and muddy soils along the North Sea, which are particularly appreciated because of the many nutrients washed in by the rivers. However, populations of shrimp can also be found today in the Baltic Sea, the Mediterranean Sea and the Black Sea, often carried in the ballast water of ships to the actually foreign regions and meanwhile also native there.

Decreased salinity protects the animals from their predators 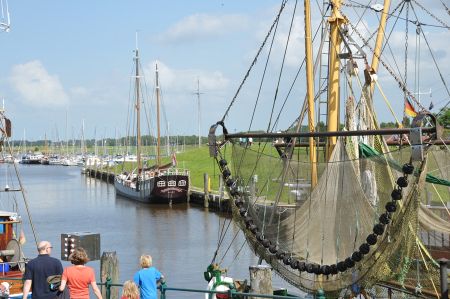 During the warmer season, North Sea shrimp can be found in the area of ​​many rivers, although the mixture of salt and fresh water probably does not pose a problem for the shrimp.

Yes, science even suspects that the reduced salt content protects the animals from their predators. Only when the water has cooled do the shrimp retreat to deeper water.

The washed-in nutrients, and one suspects also the fertilizers, have contributed to the rapid spread of the populations. 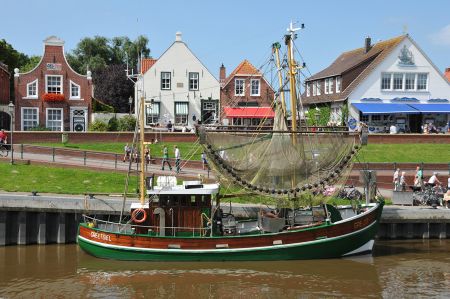 With a total body length of up to 9 centimeters in the adult female animals, the male shrimp are usually a little smaller, it is not only the legs that are used for locomotion, but above all the strongly pronounced tail fan. With lightning-fast, jerky folding of the tail fan, this muscle ensures rapid escape during the rapid flight from predators. Anyone who has ever held a North Sea crab in their hands knows this jerky tail movement, which can sometimes really frighten you. However, it is precisely this fan tail or its muscle that is the delicacy so loved by many people, because this massive muscle is the "crab meat" used.

At low tide you often remain in the tideways 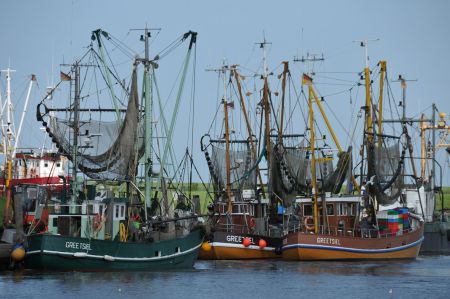 While adult North Sea shrimp stay almost exclusively in deeper waters, the offspring prefer to follow the tides during the warmer months of the year and thus also use the Wadden Sea to protect themselves from predators.

With the rising tide you come to the Wadden areas, at low tide you often stay in the tidal creeks. If predators such as seagulls come close by, the North Sea shrimp dig themselves into the sand, whereby they can also adapt their body color to the environment. 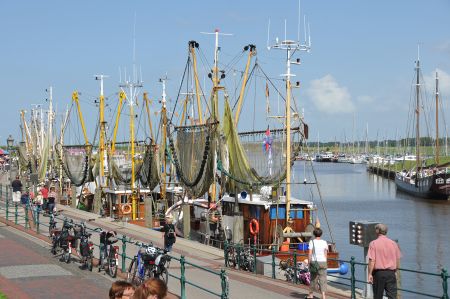 Brown shrimp were caught in the Wadden Sea as early as the 17th century, but not from a fishing boat at that time, but initially often using nets in a frame construction called a sliding hook, which was pushed across the mud flats by the grenade fisherman when the tide came in. The size of the openings used in the net then presorted the catch. In Belgium it was common to catch brown shrimp from horseback. Today, unfortunately, only run as a tourist attraction, the draft horses with the fishermen on their backs pulled the nets behind them. The catch was cooked and sold directly on the beach. This is still the case today at the crab festival in Oostduinkerke in Flanders. We know of private grenade fishermen from the 1970s who became quite successful fishermen with their sliding net during the holiday season.

Net is lowered to the seabed in shallow water 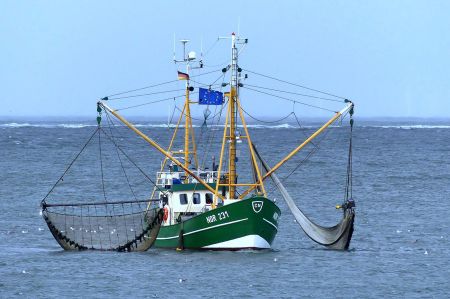 The modern, professional fishermen on their cutters use so-called beam trawls to catch brown shrimp. With the rising tide, the few remaining fishing boats leave their harbors and go to their fishing grounds in the Wadden Sea. The net is lowered to the seabed in shallow water and pulled across the seabed like a bottom trawl with the help of the beam trawl. After a certain fishing distance, the nets are hauled in and the catch sorted through directly on board. By-catch is thrown back into the sea as quickly and alive as possible. Many shrimp fishermen today are also very ecologically minded and treat nature and wildlife with care. The sorted rest of the catch is boiled with seawater directly on board, which changes the color of the shrimp to pink to reddish brown. 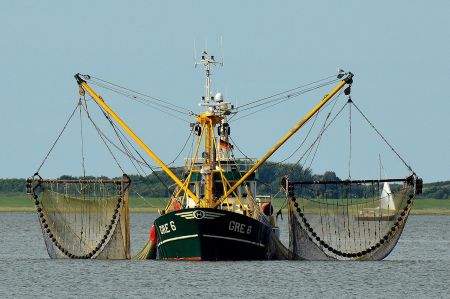 Returning from the fishing area, the brown shrimp are sorted according to size by shrimp sorting machines and preserved with common salt, benzoic acid and citric acid during storage. In most cases, part of the catch is sold unpeeled, or rather unpeeled, directly at the cutter to enthusiasts who are already waiting. As in the past, when shrimp peeling was always done at home, mostly by the fishermen's wives, today's enthusiasts take their unpeeled shrimp home and start peeling them there. To do this, the head and rear part of the animal are each taken between two fingers, bent slightly in the middle and pulled apart while rotating slightly. After some practice, it's easy to figure out what's best for you personally, and you'll quickly have a fair amount of shrimp shelled. You calculate about one kilogram of crab meat from three kilograms of raw material. 100 grams of crab meat contain about 18.6 grams of protein, 1.44 grams of fat and 130 milligrams of iodine (for the energy-conscious among us about 369 kJ or 87 kcal).

Unpealed directly at the cutter to lovers who are already waiting 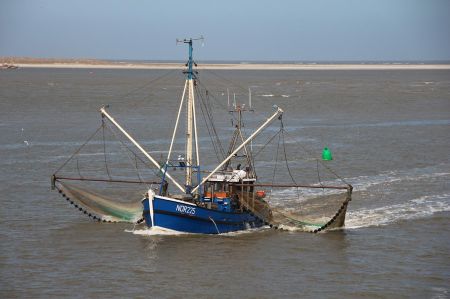 Due to hygienic regulations that were developed within the framework of EU legislation, cleaning at home is now only permitted for private use. The former homework for many in the area of ​​the fishing villages is no longer necessary, as are the competitions in fast spinning, which used to be regular. In the so-called “Ostfriesenabitur” too, shrimp peeling is one of the “exam-relevant” criteria for passing the Abitur. Whether the current solution can hold up for a long time, however, may also be mentioned at this point: what nonsense it is from an ecological point of view to deliver the shrimp by truck to Morocco, Poland or Belarus to have them peeled there and then the peeled ones to bring crabs back to Germany. Unfortunately, all the critical statements made by many like-minded people have not yet brought about a change in these strange regulations. If you draw an overall ecological balance, this can certainly not be the optimal result.

Crabs by truck to Morocco 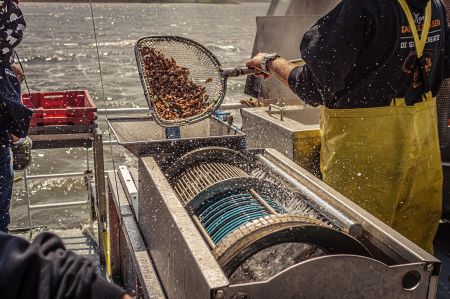 Since the introduction of machine technology, countless developers have also tried to do the shrimp shelling mechanically. Today there are even a few locations where such machines actually work. But as the industry expert puts it so aptly: “Building a shrimp peeling machine is something for those who believe in it... Some people went crazy trying it. ... It's so difficult because every crab is different”.

We can only recommend, if possible, to buy fresh shrimp directly from the cutter and shell them yourself at home. The quantities that are sufficient for a strong bread topping are quickly reached. And shrimp peeling is also sociable in the family or together with friends, because after just a few attempts you don't have to concentrate on this process and therefore have enough time for intensive discussions.

We would like to add bon appétit at this point, whether you prefer your shrimp as a topping on bread or as a salad, dressed with mayonnaise or oil.