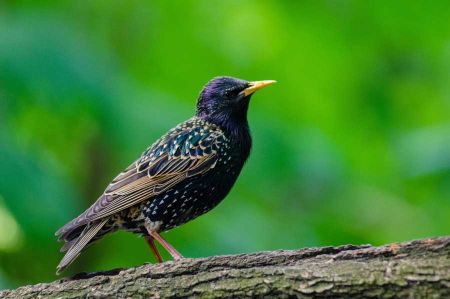 Who does not know them, the medium-sized songbirds with their powerful feet, whose plumage can be so shiny that it reflects the sun and usually ranges from typically black or dark colours to multicoloured.

We are talking about the starlings, which can be called almost "common", which build their nests for the most part in cavities in which they lay pale, light blue or white eggs. The mostly very sociable birds often appear in large flocks and are characterized by their direct, very targeted flight, as we surprisingly and very suddenly experienced several times when we visited their sleeping places in Bad Buchau at Lake Federsee, so that we immediately ducked down. They like to live in open landscapes with light trees, but in some regions of the world in forests too. They feed mainly on insects and fruits and are often referred to as omnivores, as they have partially tapped remains of human food as a source. Some species even live as cultural followers in the vicinity of settlements.

Spread by humans and new habitat for the starlings 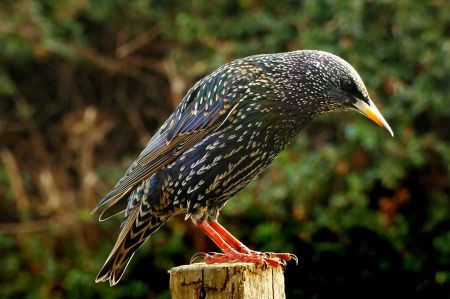 Most of the occurring species of starlings live in the so-called Old World of Europe, Asia and Africa as well as the Asia-Pacific island world, where they occur naturally. The preferred habitat of the starlings, depending on the species, include forests, open grasslands or savannas with individual trees, bush landscapes but also farmland with orchards or grain fields. Starlings also like to live in human urban environments.

Several European bird species, including the starling (Sturnus vulgaris), were introduced to North America by the American Acclimatization Society at the end of the 19th century. The reason for this approach is said to have been that all birds that appear in Shakespeare's literature were also wanted in the USA. Hundreds of starlings were released in Central Park in New York in 1890/91. In just 60 years, the invasive star spread from the east coast to the west coast of North America. The population at that time was estimated to be around 200 million birds.

Few species have also immigrated or brought with them as far as Australia and New Zealand. Attempts are made to control the number of invasive species that endanger the native bird world, but also sometimes cause significant damage to agriculture. 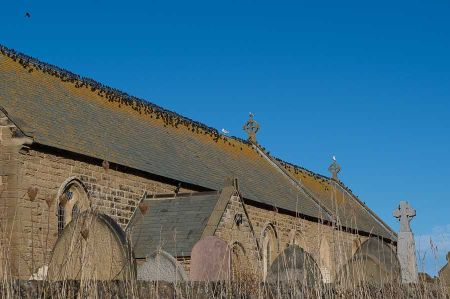 Most species of starlings are gregarious birds that usually appear outside of the breeding season in smaller and larger groups or in large flocks. Depending on the species and region, groups of hundreds to thousands of birds travel together and like to invade fruit-growing areas, where they sometimes destroy significant parts of the harvests. The fruit growers try to protect themselves from this in a wide variety of ways. As the best affordable and effective protection, nets over the fruiting plants have often prevailed. In Europe, formation flights (murmurations) with up to millions of birds have been observed during bird migration from northern Europe to North Africa. In some countries, such as Italy and Egypt, the starlings are caught with large nets, especially at this time, and are then often eaten.

Spectacular flight manoeuvres of the starlings during bird migration 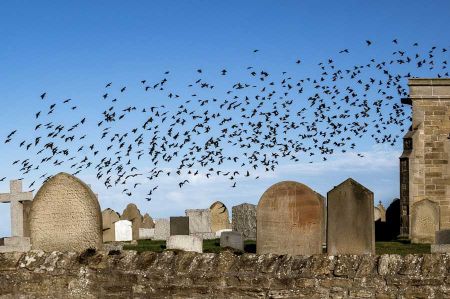 When the autumn bird migration is in full swing, there is an almost daily opportunity to see swallows, thrushes or, if you are lucky, cranes passing through to the southern wintering quarters. The most spectacular flight formations, however, are the starlings, whose huge black swarms look like a large, synchronously swirling cloud from a distance. We were able to observe this phenomenon during the evening approach to the sleeping places at the Federsee.

As early as the beginning of September, the starlings began to gather and prepare for the migration to the south. The size of the swarms has increased since then, as family group after family group gradually came together. During their spectacular flight manoeuvres, which are currently well visible for everyone on the bird migration, it is fascinating to observe how the huge flocks of starlings move almost synchronously and the birds never collide.

Each star pays attention to its swarm neighbors and every change of direction pulls the swarm mates along with it. The sum of the individual decisions then results in what we perceive as a uniformly moving cloud. 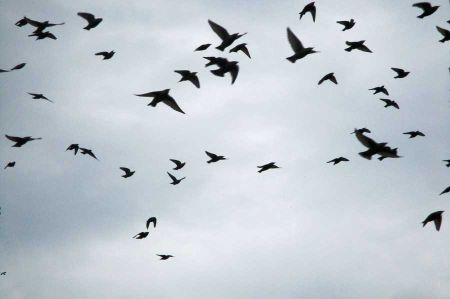 In contrast to migrating geese, no bird flies at the top of a formation in starlings and thus determines the direction. The behaviour of a flock of starlings is even the subject of scientific research. How the decision rule of the individual bird is transferred to the decision-making of the group is of interest not only to ornithologists, but also to sociologists, who investigate the "swarming behaviour" in us humans in an analogous manner.

To be out and about as a huge flock probably has two decisive advantages for the starlings. On the one hand, the group offers the individual bird the protection of the community. Statistically, the larger the group, the lower the risk of a single animal being caught by a predator. In addition, the confusion of a flock of starlings is confusing for the attacker and makes it much more difficult to focus on a single target. Even for the peregrine falcon, the fastest animal in the world at over 300 km / h in a dive, it can be difficult to grab a single star in the group.

The star is a social species of bird 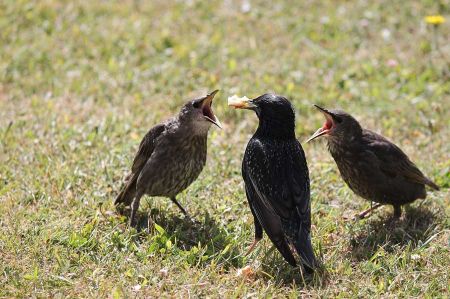 In addition to protection, the community also offers the advantage of exchanging information. Young and inexperienced starlings or those who simply had no luck in foraging for food just need to fly following those conspecifics who are most in a hurry to return to a good place with food the next day. A large group of sleeping places can thus also serve as an information exchange. Since starlings like to eat fruits and berries, the food they find is often enough for large swarms. In general, starlings are a very social species of bird and even during the breeding season they like to populate nesting boxes hanging next to each other. Their social behaviour continues on the bird migration.

At the moment, nature lovers can watch the swarms of starlings approaching Lake Federsee near Bad Buchau in the twilight, often flying back and forth over a common sleeping place for a long time, as they don't settle down to sleep until night falls. They especially like to gather at such lakes with large, extensive reed zones and seek shelter there for the night.

At the latest with the onset of winter, the last starlings move to the Mediterranean, where hundreds of thousands of them winter in Rome, for example. At the end of February, however, they were among the earliest returnees.