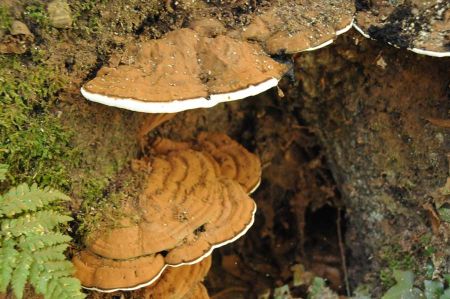 During our hike through the Falkenstein Castle Park, in addition to the really impressive stone formations and the almost natural-looking paths.

We also noticed the park's many deadwood, which is not removed from the park as a natural habitat for plants and insects, and thus also a wonderful breeding ground for a variety of fungi, especially the tree fungi represent themselves to the visitors.

Almost a paradise for tree fungi of all kinds. We were particularly pleased by the tinder sponge, since it had settled on some trees almost in the form of a staircase, which almost invited to climb the trees (which we have not done, of course, even because we did not want to damage the mushrooms). The surfaces of the fruiting bodies of the tinder sponge were so firm and left such a stable impression that this comparison with a stairway was acceptable.

Tree different fungi use the dead wood as a breeding ground

In the broadest sense, the group of tree fungi includes all types of fungi that colonize wood and use it as a breeding ground for their own lives, whereby the tree is either already dead or dying. The fungi derives the nutrients directly from the wood via their mycelial tissue, by degrading utilizable substances with specific, fungal enzymes. A process commonly referred to as rot. Roughly one differentiates between mushrooms the brown rot and mushrooms which produce white rot. Basically all mushrooms are showing the fine mycelium tissue, with which the tree is infected, before the first fruiting bodies show up. The actual "mushroom" is located in the interior of the tree, it is similar with almost all forest mushrooms, where only the fruiting body above ground can be seen.

The so-called brown rot can decompose all wood substances except lignin, while the white rot just breaks down the lignin in particular. The brown rot decomposes essentially the polysaccharides, here especially the cellulose in the wood structure and thus destroys the fiber structure, whereby the wood first discolored and then becomes brittle, it comes to the so-called cube breakage. Up to 80% of the wood is decomposed by the fungi, or used by them as a nutrient by conversion. The lignin remains unaffected by the brown rot, but the wood dries almost completely.

Lignin is the glue between the wood cells

The lignin forms the so-called adhesive between the wood cells, which is particularly stable, which is why the white rot is additionally dependent on other energy-producing processes in the decomposition process. The order of the decomposition processes in the wood is quite different, also depending on the type of mushrooms present. Thus, in the presence of the genuine tinder fungus, the strong degradation of lignin immediately begins. The wood shreds and turns almost white. The remaining polysaccharides, here in turn especially the cellulose, provide for strong swelling of the wood by absorption of water. Dehydration is then no longer possible, the decomposition of the wood is almost 100%. 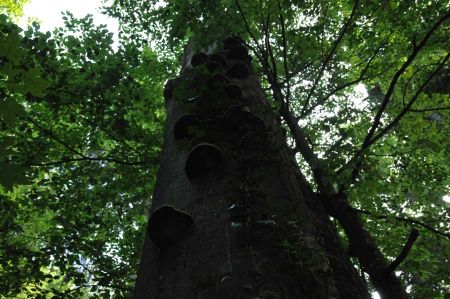 Many tree fungi show their fruiting bodies only during a single growing season, while others show comparable growth rings to the wood, so that they are almost completely associated with wood diseases such as woody plants. Growth can be confused. The tinder fungus is one of the hard tree fungi, it forms perennial fruiting bodies, which sometimes show quite significant growth zones at the bottom and at the front edge. Mostly it is found on beech or birch.

The name tinder sponge is based on findings that date back to the Neolithic, because the loose-felted middle layer of the fungus, the so-called Trama, was processed into tinder. With the discovery of the glacier man "Ötzi" also scale remnants were found, which he led to the fire with it. In the West, there were elaborate procedures to put the tram in soaking, cooking, tapping, and nitric acid and dry to produce a felt-like mass that immediately began to glow by impinging sparks. A kind of early lighter. Even today, the trama (hyphal layer) of the tinder fungus in Romania is used for the production of huts or caps.

Demand for tinder sponge leads to import from Scandinavia

Until the 19th century, so-called wound sponges were sold in pharmacies as haemostatic wound dressings under the name "Fungus chirurgorum". The demand for the tinder sponges was so high during this time that the fungus was temporarily imported from Scandinavia, Bohemia and Hungary and became a rarity in some areas of Germany.
Thus, these interesting plants with the sometimes huge fruiting bodies provide not only for interesting photos and almost sculptural similar forms of dying trees, they provided in the past for warming fire and today in particular for decomposition of deadwood in the cycle of life.