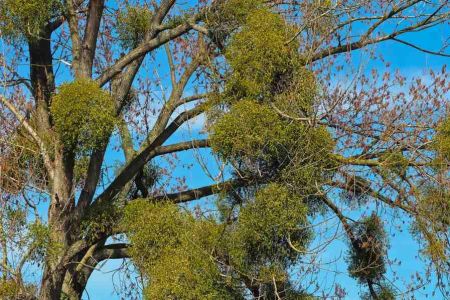 Who does not know them, the characters from the Asterix-Comix, especially the infamous Druid Miraculix and his magic drink. And if there should be someone not know:

Asterix is a figure, created by author René Goscinny and draftsman Albert Uderzo in 1959, in between becoming the most successful French comic series with the eponymous main character in the center. However, other main characters include Obelix and the Druid Miraculix, known for his magic drink. Did you know that an essential part of this home-brewed potion is mistletoe?

The Druid Miraculix and his potion 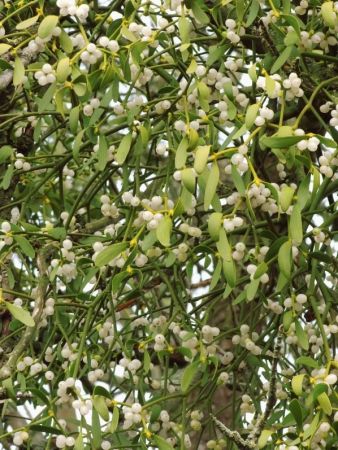 Only the mistletoe in magic potions gave the inhabitants of the small Gallic village these incredible powers, which are necessary for the defense of the last village not yet occupied by the Romans. The authors of the fantastic comic series were probably inspired by the story of Roman Pliny that the Gaul priests, the druids, used mistletoes and the trees on which they grew, worshiped as sacred, especially when it came from oak trees. Pliny describes how the Mistletoes were cut in a special ceremony by a white-robed Druid with a golden sickle, which was then put into a potion to fertilize infertile animals and cure poisoning.

Even in Germanic mythology, the mistletoe has a symbolic meaning. Loki kills Balder, the son of Odin and Friggs, by tying a mistletoe to blind Hödr and letting it aim at Balder. Mistletoes thus became Balder's "Achilles heel" because all the elements and living things of the earth, except the mistletoe, have vowed not to harm the beautiful young god.

The mystery of the mistletoes has survived to this day, as the name already refers to, because popular names of mistletoe are: thunder broom, Druidenfuß, witches broom, witch herb, wintergreen, Bocksbutter,  Albranken, Vogelkraut, Kreuzholz (most of them orign from German mythology). If you go through nature and look at some trees that are covered with mistletoe, you can already understand that these mythologies have emerged. 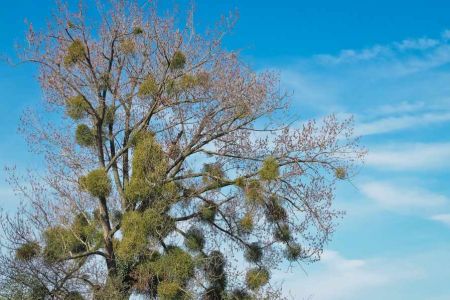 Mistletoes are plants of the genus Viscum from the sandalwood family (Santalaceae). Previously, the more than three dozen Viscum species and their related genera such as Arceuthobium and Korthalsella belong to a family called Viscaceae. Mistletoes are semi-parasitic, epiphytic shrubs that select trees as hosts. Especially in the tropics and subtropics, this life form also occurs in other plant families, eg. in the distantly related, species-rich belt flower plants (Loranthaceae).

Our birdwatching tour on the golf course near Stuttgart has once again referred us to the wide occurrence of mistletoes, so strong was their spread progressed on the site. Of course, one should not and cannot speak of malformations or even diseases of the trees, because almost the opposite is the case:

In alternative medicine, mistletoe is said to have an anti-carcinogenic effect, although this seems questionable on the basis of current knowledge and has not been scientifically proven. In England and in the US there is even, so far, a part of the mythology is still preserved today, even the custom that one should kiss under mistletoe and this also especially during the Christmas season extensively.

Whether the topic of kissing and mistletoe was already known by Asterix and Obelix, is currently unknown, perhaps a topic for another comic.