Almost every Turkey lover knows the small Turkish dwarf banana from the Riviera coast, which is so wonderfully sweet and tasty on the markets and vegetable bazaars.

Again and again, however, one hears the story of the import ban on precisely these bananas, since they do not comply with EU standards for bananas. But where does this fruit originally come from and who brought it to the Riviera coast between Manavgat, Alanya and Gazipasa and started planting it?

Originally from the Southeast Asian islands, the triumph of bananas first began in Africa, where they got to through Madagascar through immigrants from Indonesia. These immigrants also brought the rice plants with them. From Africa, the banana first made its way to the Canary Islands, where the Spaniards were already growing it quite professionally in plantations. A little later, Portuguese settlers brought the first bananas to the Caribbean and from there to Central America. This is how the first plantations came about in the New World around 1500. Amazingly, it wasn't until 1633 that bananas grown in Bermuda first made their way to Britain and mainland Europe. About 100 types of bananas are known today, but only some of them produce edible fruit. Only a few of these species are actually cultivated for food production, which subsequently led to monocultures with the resulting problems. Until the 1960s, the main variety of bananas intended for export was the Gros Michel variety. It was much larger and tastier than most of the commercial species known today, while also being much less sensitive to shock, so that it could be transported and shipped in the form of a perennial. Due to the cultivation in monoculture, the so-called Panama disease was able to spread so much that the Gros Michel variety has almost completely disappeared from the market. Today the Cavendish variety is almost exclusively exported, but it has to be packed in boxes due to its sensitivity to impact and tastes much bland. Since the 1990s, however, it has also been noticed that the Cavendish variety is becoming increasingly problematic in monoculture. Here one tried in vain for years with genetic manipulation to prevent further problems, which failed, however. The reason for this can also be seen in the type of cultivation as a monoculture, because the plants have become sterile over the years, so that crossbreeding is no longer possible. Without any pollination and fertilization, the fruits are now formed by the perennials. If no seeds are produced, generative propagation is inevitably no longer possible, i.e. no crossing either. Blessings and curses of our modern times.

Bananas on the Riviera - small but mighty! 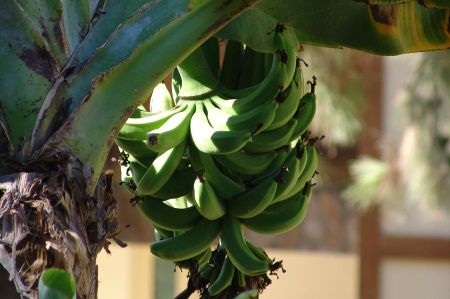 Riviera bananas have so far only been partially affected by these problems, perhaps that's why they've been able to retain their great flavor and sweetness. Perhaps it is also due to the fact that bananas have only been cultivated here for about 100 years.

Compared to other types of fruit, however, bananas only provide a small amount of vitamin C, only about 12 mg / 100 grams of bananas. However, the content of minerals such as phosphorus, iron, potassium, magnesium, manganese and copper is so valuable that the banana is one of the most healthy foods. The fructose content and other fibers also contribute to this.

Due to the terrain structure of the Taurus, Alanya could only be reached by sea until the second half of the 19th century. Almost the entire trade with the export of wood, sesame, beans, nuts and fruits was carried out by sea. The return freight to Alanya often consisted of salt, soaps, oils and... one day also a banana plant. The trader Serifali Ahmet Aga, who is known by name, brought a banana cuttings from a trading trip to Egypt to Alanya to plant as an ornamental plant for his private house. When the cutting grew and produced fruit, it was thought to be poisonous and Serifali Ahmet Aga forbade his family to eat it. The ripe fruits fell from the bush and were quickly devoured by ants and other insects. Observing this, it was the housekeeper of the Aga family who was the first to taste the fruit that was still on the tree and was amazed by its delicious taste.

This knowledge quickly made the rounds and a short time later further seedlings were imported. Around the 1920s, the demand for bananas increased so much that the cultivation of bananas, which is only possible between Manavgat, Alanya and Gazipasa on the approximately 200 km long coastal strip, was no longer able to meet the demand. Many attempts to expand this cultivation area failed. Bananas need a mild climate and lots of water to grow. Here on the coast they even say that the banana plant has to be able to see the sea, otherwise the fruit won't grow. If it gets a bit cold in winter and the plantation farmer has not covered his plants, the sensitive plant reacts immediately, turns black and dies. If the location is good and the climate is conducive, two harvests a year are easily possible, with a single banana tree weighing up to 75 kilograms.

Today, around 40,000 tons of bananas are harvested annually on the Riviera. A quantity that is far from sufficient to cover the demand. Everywhere in the shopping centers, as in Europe, you can find the almost "tasteless" imported bananas.

Juniper - bushes and fruits along the way