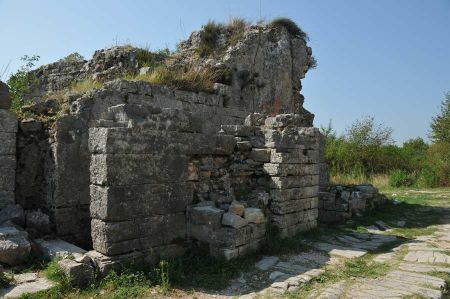 During our second visit to Solin we were again visiting the ancient ruins of Salona near Split together with Robi, this time our main focus was directed to Porta Caesarea and to the still existing parts of the Roman Road in front of the remains of the city gate including the Roman bridge.

The former monumental gate in the east of Salona was erected during the time of Emperor Augustus. It was built of large, regularly-hewn blocks of different origins in form of walls coverings and the unused spaces in between were filled with unused rock material to obtain sustainability and security. Two octagonal towers once formed the guard towers on the outer sides of the gate, which had three entrances. The largest entrance was mainly used for the transport of goods while the two smaller side entrances determined for pedestrians. Even today one can see the deep ruts of the wheels of the carts in the stone pavement. Yes even the later on modified track widths are still clearly visible.

The Porta Caesarea was once two floors high: The upper floor had a series of window openings and served as a passage for the guards, it was once adorned abundantly with fluted half-columns, while the lower floor with the three-part entrance was however made much easier. Overall, the goal of the construction was rather meant to be representative then for defensive purposes.

The city spread continuously, so Porta Caesarea lost its importance as a city gate and became a kind of triumphal arch. So, under the Emperor Constantius, it was renewed and other decorative elements, such as the Tyche were implemented in the 4th century AC. It is the picture of a young woman with loose hair and a crown on her head, which the city walls resembled in its silhouette. In her right hand she has a banner with the initials of the city Salona, ​​with the left she leans against a vessel protruding from the ears.

Partial the gate also served as water supply or waste disposal, south to the door close to the Nymphaeum, from which a network of canals supplied the oldest part of town. Interestingly, one of the inflow channels for the city Salona directly runs inside the city walls, as clearly to be seen not far from the Porta Caesarea in one pass through of the city walls.

Next to the gate a larger part of the original pavement of the Roman road Decumanus Maximus can be seen towards Roman bridge over the river Salon before it is getting lost in the grounds. The bridge with its three arches of sculpted stone blocks, which were connected with mortar, dates from the 1st century BC and once passed through the western branch of the river Salon (today called Jadro). It was the continuation of that time so important, urban major road, the Decumanus Maximus, which ran through the Porta Caesarea and which split in two directions lateron: one road led to Porta Andetria and the inland, the other crosses the bridge to Epetium (Strobeč) and then continue on the Adriatic coast towards Dubrovnik.

Despite multiple visits to the ancient ruins of Salona, ​​we are always impressed by the vastness of the city system and the many details that is worth discovering.