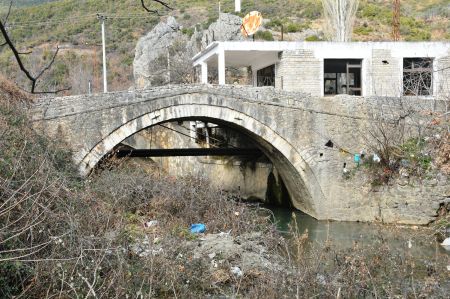 In order to continue the preparation of the Camper Cultural Tour through Albania-Macedonia-Greece in April 2017, which will lead through the towns of Shkodar, Kruja, Tirana, Durres, Elbasan, Struga, Ohrid, Stobi, Bitola, Meteora, Rapsani and Thessaloniki, we agreed for a meeting with the operators from Shkodar, Tirana and Struga.

As the first meeting point we went to the already known campsite Rino at Lake Ohrid in Macedonia (FYROM), where Rino and Pimi wellcomed us joyfully. Of course, a report of our experiences at the CMT fair in Stuttgart was first announced, followed by initial talks on the development of the space and on the already announced space expansion, which has already been speeded up. About 200 meters away from the present location, Rino was able to get a land at the lake site, which was first slipped and planed and could now be planted with first trees and lawns. The new square also offers direct access to the cycle path, which leads to Ohrid and thus to the mountain bike route of the Galicica National Park. Of course, there was also a lot of talk about the previous drawback in the number and furnishing of the existing laundry rooms, which will be completely rebuilt on the new site. The first plans were already available, were discussed and adapted accordingly.

The next morning we went crossing the Pass Quafe Thane to Elbasan, where we took a short stop at the ancient Roman bridge (about 10 kilometers before Elbasan). We had already crossed this bridge several times, we had seen the signs, but the bridge itself had escaped us so far. Basically no miracle, so strong the bridge is hidden by the modern development, we call it "integrated", despite the actually excellent conservation status. As in many countries, it is not yet known in Albania which jewel this bridge really represents, it is located directly on Via Egnatia or even part of it. We are sorry, but nothing has been found out so far. Thus both the watercourse itself and the bilateral side is heavily polluted and serves rather as a waste disposal site. Too bad, because it is a real pearl on the Via Egnatia and who knows what tourist visits in the future can still effect. Even Rino, who has only recently been dealing with ancient cultural heritage, was astonished at the state of conservation, at least 2,000 years old.

A little later we went on towards Tirana to the camper stop at Hotel Baron where we wanted to meet Linda, Franc and Florian (hotel operators). Situated directly on the outskirts of the town and coming from both Elbasan and Durres, this square is easy to reach and offers an ideal opportunity to explore the city for campers, which has experienced a truly imposing thrust of modernization and boom. A recommendation, which we can only pass on and why we also included Tirana into the camper-cultural journey.

A little later Linda from the Legjenda campsite in Shkodar appeared, so we could begin our detailed tour planning. Here, too, of course, the report on the CMT was eagerly awaited. The theme of the route flyer describing the individual stations of the camper route to the south across the Balkans, which are available to every camper as an intermediate station, were extensively discussed. Linda was also able to report on progress in the Legjenda square, so they are currently working on a swimming pool, which will be finished by the start of the season.

An interesting and open round of talks from three camping sites, all of which work on common concepts to promote camper culture tourism. The concept of the camper-cultural journey through Albania-Macedonia-Greece stands, with all its details.

We have 397 guests and no members online