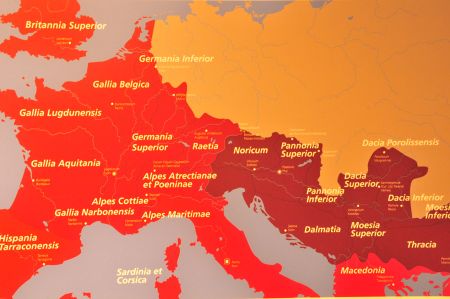 During the first half of the 4th century, Singidunum had a period of peace: the city gained the status of a Roman colony, which further strengthened its autonomy.

With the division of the Byzantines in 395, with the ruler ship of Theodosius I., Singidunum belonged to Eastern Rome, from which the Byzantine Empire emerged later. Singidunum was now the Northwestern border post to the Eastern Roman Empire.

In the 5th century, the Western Roman Empire disappeared as a power factor, which meant a consequence of invasions of the Balkan Peninsula by Germanic, Mongolian, Slavic and Turkish peoples for the remaining Eastern Roman Empire. Moesia and Illyricum are haunted by subsequent invasions by Huns, Ostrogoths, Gepids, Sarmatians, Avars, and Slavs. Singidunum itself falls into the hands of the Huns in 441 and is recaptured by the Romans in 454, falls to the Ostrogoths in 470, 488 to the Gepids and Sarmatians and 504 again to the Ostrogoths.

Justinian I renews the fortress of Belgrade

The defensive fortress system of Singidunum

In 535, the Emperor fortified the border of the Danube by means of a large-scale fortification program on the lower Danube, serving as a purely defensive meaning. Justinian renewed the singedunit fortifications of Singidunum in the form of a much smaller but strong fortified Byzantine kastron within the old abandoned Legion base camp (Castra), notably through a further staggering of Kastra, that was newly built, the political as well the new administrative center of Justiniana Prima, which was responsible for the organization of the region, was to protect and prevent invasions to Moesia, but proved to be a far-reaching strategic mistake as a result of the unavoidable subsequent conquest of the Slavs in the Balkans.

Castle Singidunum - the core of the medieval city