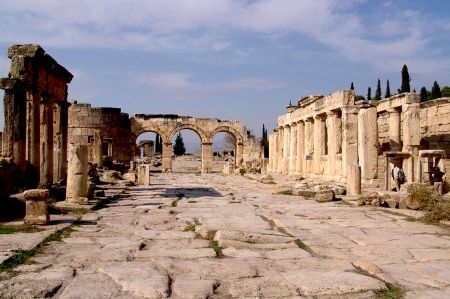 The ruins of ancient Hierapolis follow the 1200 metre long and 6 metre wide road which is lined with columns all over the travertine terraces of Pamukkale from north to south.

The street of columns begins right behind a gate of three arches which had been built as a memorial to the Roman king Domitian about 84 B.C. To the north of the gate you will find the ruins of a bath which had been built during the Roman period and which consists of three different sections. During the Byzantine period this building had been used as a church. North of this building and next to the centre of the town you will find the northern Necropolis with about 1200 different tombs in the Anatolian style.  Because of these different styles of tombs you realise that people of different nationalities and culture had lived there. Tombs of Kilikian or Roman style are shaped like houses, showing a rectangular structure and consist of one or more floors. The tumulus tombs of the Lycean culture just have one door. Sarcophagi, mainly situated on high columns or platforms, are tombs of the Lycean people. Quite often you will find different information about the dead person in the tomb written and carved into the stone.

South of the Gate of Domitian, where the road of columns meets the former city wall, you will find another Byzantine gate, built from old used stones. South of this gate there are the ruins of a Byzantine basilica and again south of that there is the Roman bath, formerly consisting of five sections which today is used as a museum. Most of the antique treasures which have been found here today are in an exhibition at the pre-historic museum of Beyce Sultan. Next to the complex of the Roman bath you will find the ancient thermal bath with the ruins of historic columns and stones under the water. While swimming, you can see them. Right behind the pool, on top of the rocks of the main thermal spring, you will find the foundations of the old Temple of Apollo and next to that the holy area of the goddess Kybele. This temple was formerly dedicated to the Frygian god, Men, who was the successor to Apollo.

The temple, which includes a cella and pronaos, was erected on a podium 20 metres in length and 15 metres wide, at the front of which there are six Corinthian columns. South of the temple, between the rocks, acting as a kind of natural corridor, there is a door which leads to the underground cave containing holy water. In ancient times this door was quite famous and very important, because it led directly into the world of the God Pluto. The monks, especially, used this door to impress and put pressure on the people. These people had no idea about the fatal carbon monoxide gas in the cave. They just believed what the monks were telling them. If there was someone who did not believe, they let a bird fly into the cave to show that Apollo would immediately kill the bird. With the death of the bird the influence of the monks grew, so the people always tried to obey them.

At the northwest corner of the temple, there is a Roman spring the opening of which is completely overlaid with carved marble. To the east of the temple of Apollo is an open area used as the town agora. To the east of the agora, built into the slope of the mountain, there is the Roman theatre. This theatre offered seating for about 15000 people. The front of the two tier stage is completely overlaid with carved marble. In front of the building you will see three rows of columns built in Corinthian and Ionian style on top of each other. These indicate the five doors used by the actors to get on the stage. On top of the first row of columns are a couple of alcoves for marble statues. All the marble reliefs show details of the legends of Dionysos, the god of wine and entertainment.

The podium of the theatre was made from marble and is about 4 metres higher than the orchestra pit. On top of the orchestra pit, there is a podium supported by a spiral of carved columns, in between which there are several shell-shaped alcoves. In the middle of the stage you will find the vomitorium, built like a tunnel, which opened out to the orchestra. The two-metre-high wall between the orchestra pit and the cavea shows that, in late Roman times, this place had been used as a gladitorial arena. The reliefs on the north of the protection wall show the water nymph Hiera, who the town was named after.

One of the most important middle age constructions of this region is the Akhan Caravanserai, about 16 kilometres to the north along the Silk Road, which was built by Karasungur in 1253 to provide accommodation for the merchants on their journeys. The overlaid marble shows lots of interesting figures and reliefs.

The region of Denizli today is well known for its travertine stone from Pamukkale, the thermal bath and also the cock fights in the town of Denizli. The town's name (Swaura in the Etruscan/Pelagian language) simply means "holy town". Much later the town was called "Hierapolis", which also means holy town in the Macedonians and Byzantine languages. Excavations of prehistoric sites at Beyce Sultan and other tombs have shown that Etruscan, Luwian and Plascian hordes came here about 3000 B.C. and founded the first holy places dedicated to the Goddess Kybele. This place had also been settled by other tribes. As it became more and more well-known, the single temple became a centre of worship to Apollo. Even during the Roman period as well as during the time of the Christian apostles, this area was seen as a holy centre. Towns like Laedicia and Kolossai were also given the status of holy towns and the inhabitants were invited to convert to the new religion called Christianity. In 87 B.C. the famous apostle, Philliphus, lived here and to celibrate his efforts on behalf of Christianity a memorial was built. Even later, Byzantine conquerors kept this traditional holy place, as did the Germanic Turkmenian people about 1000 years later.