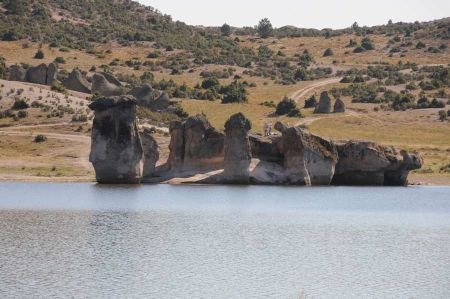 Our tour into the valley of the Phrygians (Frig) in Afyon, the valley extending from Döğer (in İhsaniye district) over Alanyurt until after Seydiler, should also lead us to the famous monuments of the Phrygians, the Lion- and the Serpent stone.

From the Turks called Frig Vadisi, along the whole route magnificent tufa places comparable to those in Cappadocia can be found.

From the village Ayazini, called Metropolis in Byzantine times, located in the district İhsaniye in the Turkish province of Afyonkarahisar, about 15 km east of the town of İhsaniye and 30 km north of the provincial capital Afyonkarahisar, we started into the valley. The village lies next to a path passing the valley, extending from southwest to northeast, which has a tuff landscape that is crisscrossed highly influential of rock churches and apartments in the nature of the Cappadocian cave houses. The most important sacral building from the Roman period is a Byzantine cross-domed church in the southwest of the valley. In their design They known as barrel vault, a series of six (though interrupted) columns and a further into the rock reaching baptistery. It is noteworthy that the main and apsidioles as well as a part of the dome are not only worked from the inside into the stone, but are modeled on the outer side too.

In the further course of the valley you still find smaller chapels, a large living and monastery complex in a side valley and rock tombs of Roman origin. Some of these tombs are located above the Islamic cemetery, including the grave with the Ionic columns that contains two floors of ten niche graves. The grave was converted to a church in the Byzantine period. In another tomb a relief with two lions can be seen.

During the journey you will find lot of in the rock-cut settlements, which were still inhabited up until the Byzantine period. Apartments, monasteries, churches and small castles from the early days of Christianity and rock tombs and streets of the Phrygian and Hittite period. Here was the meeting places of the Emre Dervishes from the early days of Islam in Anatolia.

Aslantaş (Turkish for Lionstone) and Yılantaş (snake stone) are two monumental Phrygian rock chamber tombs in the Phrygian Valley, about 40 kilometers north of Afyon. Aslantaş was discovered in 1882 by the Scottish archaeologist William Mitchell Ramsay. It is carved into a ten meter high boulder. Halfway up is the grave chamber, on both sides guarded by two standing lions figures. At the height of the grave chamber there are two other, smaller, lying lion figures, which are difficult to detect because of their poor condition. The Turkish archaeologist Ekrem Akurgal recognizes in them ionic influences and therefore dated the monument to the 6th century BC.

A few hundred meters away is Yılantaş, a collapsed rock grave of the same kind. The name comes from the fact that the local farmers held the fallen lion's paws for snake representations. Not far away you will find the Phrygian cult facade Malta.

Other notable monuments in the Phrygian Valley are: