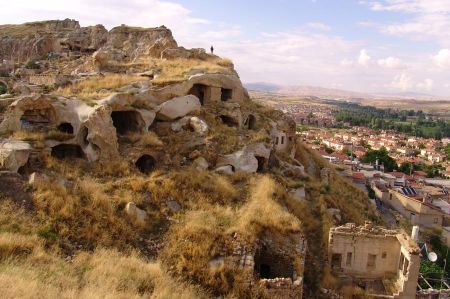 Being a small town of Turkey, Ürgüp has a population of 15.912, located on east side of Nevşehir, which is large province of the region, with a distance of 20 km and has an easy transportation path thanks to highway no 767.

Being famous with its meat patty and serving to winter tourism with its Erciyes Mountain having height of 3917 meters, Kayseri province is located in west side of Ürgüp with a distance of 60 kilometres. Ankara province being capital city of Turkey is located in northwest with a distance of 260 kilometres. Altitude of Ürgüp above sea level is 1150 meters and its touristic region is located in the centre of Cappadocia. Many places of interest are located in neighbouring areas of the province, such as fairy chimneys, interesting geological stone structures and cave churches constructed during initial Christianity periods.

Today, Ürgüp is an important shopping centre in terms of carpets and hand works, as well as vini (wine) culture and wine trading. Many hotels have been constructed due to developing tourism in recent years and Cave Houses became the most significant hotels among all. How many people had the chance to accommodate in a comfortable “natural cave” dressed carefully?

There, we obtained information about viniculture which is very fertile on the volcanic soil in the Ürgüp region. Here the vineyard isn’t pulled upward as in the traditional wineyards, but rather it is more commonly grown like bushes. These wine distilleries open their doors wide open when visitors arrive and they entertain them, usually they are indicated with a simple “Wine Distillery” sign. There are a lot of small family-owned businesses in the region. The only big wine distillery is Turasan and they store 2,000,000 litres of wines in the cellar a year and wait for wines to ripen in stone caves (approx. between 6-18 months). Large cellars and storages, which resemble human caves, are dug inside the stone and wines are stored inside these caves. Because of the high demand for the region’s wines, they are also buying grapes from Eastern Anatolia now.

Rose Valley next to Ürgüp