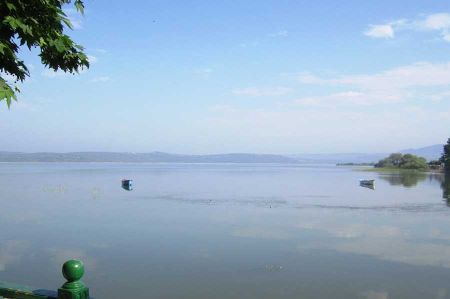 Once in the vicinity of Bursa, we of course also wanted to see the large freshwater lake Uluabat (Uluabat Gölü), or as it is often called due to the former Greek city, the Apolyont lake.

With a lake area of ​​between 135 and 160 square kilometres, depending on the season, the Uluabat Lake is one of the smaller Turkish lakes, but it is worth a visit. The deepest point in the lake is just 3 meters but there are 8 islands in the lake, with one more of the islands becoming a peninsula when the water level is low. The largest island in the lake is known as Halibey Island.

Uluabat Lake is fed by the Mustafakemalpasa River, which brings meltwater and rainwater from the mountains and has formed a large, muddy delta at the point where it flows into the lake. Due to the Uluabat River, which forms the outflow of the lake in a westerly direction and then passes through the Susurluk River to the Marmara Sea, the water level in the lake is so low.

A great fauna and flora could develop along the shores of the lake, so here you can find the largest formations of white water lilies in Turkey. The bird world has also discovered the lake as a resting place on the annual flight to the south and has taken it over for itself. Today one finds extensive breeding areas of the pygmy shag (Phalacrocorax pygmeus), a species of cormorant that is otherwise threatened with extinction. The shores of the lake are appropriately protected and well guarded by local and foreign conservationists. In June 1998 the Association for the Protection of Nature Turkey (DHKD) discovered 823 pairs of pygmy, 105 pairs of the black heron, 109 pairs of the black heron and 48 pairs of the Eurasian shoveler breeding at Lake Uluabat.

Already in the earliest history of human settlement, the lake was used for fishing, and it was also on the main trade routes between Europe and Asia, which resulted in the early settlement of people. The Greek settlers were the first to settle here in large numbers and to establish a city that became known as Apollonia (Apollonia ad Rhyndacum). Today called Gölyazi, there are only a few remains of this ancient city history.

In the middle of the 2nd century BC, Apollonia was probably a colony of the Pergamon Empire, because it was recognized as a Milesian Apoika, which was named after the mother of the Emperor Attalus II, Apollonis. A little later, with the arrival of the Romans, Apollonia belonged to the Asia province of the Roman Empire, which was accompanied by a duty to Rome (civitas stipendiaria).

Later, during Byzantine times, the city became the castron and seat of a bishop belonging to the metropolitan area of ​​Nicomedia. After being conquered by the Seljuks in the 11th century, Apollonia was once again Byzantine until it was conquered by the Ottomans in the 14th century.

Remnants of the wall on the shores of Lake Uluabat

Apollonia was once built on two hills directly on and in Lake Uluabat. Even today you can see the remains of a Byzantine fortification / castle on St. George's Hill, which can be found similarly on the second hill. First excavations have shown that the construction was probably carried out on already existing Hellenistic buildings. Other remains of the wall are from the early Middle Ages (8th - 10th centuries) from the Byzantine period, as well as the three-aisled church and a small one-room church on Constantine's Island have been preserved.

Until 1922/23, a large part of the population was of Greek origin, who lived on fishing in the lake or were engaged in the extraction of silk by cultivating the silkworm, for which the region was known. It was just with the development of synthetic fabrics that the art of silk production was suppressed and later almost forgotten.

We have 230 guests and no members online