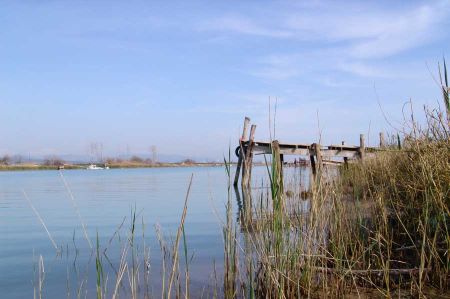 The final section, where the Manavgat River flows into the Mediterranean, is called the Manavgat Channel. This is probably because here the river runs for several kilometers parallel to the sea, giving the impression of a man-made artificial watercourse.

Especially on weekends, this region is heavily visited by locals and fishermen, as on one side the cold turquoise blue waters of the river and on the other hand the crystal clear waters of the Mediterranean awaiting guests for fishing or swimming.

In this urban area, where the river between splendid flowering meadows and sandy dunes reaches the sea, daily boat tours are organized during the tourist season, which then pause on the canal to offer tasty fish and other seafood to their guests. A tip on the edge: here you should also attend a sunset, because the color palette of reflecting sea and river water is simply unique. 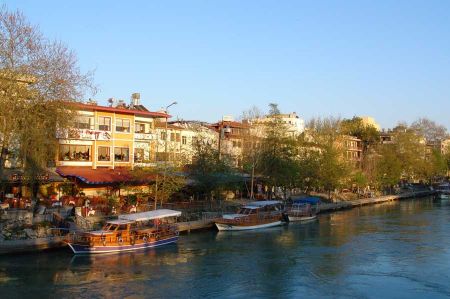 The word delta originally goes back to the letter Daleth (presumably "door") of the Phoenician script. Around the middle of the ninth century BC this was adopted as a delta into the Greek alphabet. The Greek historian Herodotus uses the sign / word Delta fourteen times in his histories as a geographical proper name for the Nile delta, describing the extent of the Nile delta but not drawing an explicit parallel to the shape of the letter. As Herodotus mentions, the word delta for the mouth of the Nile was previously known to the Greeks (Ionians).
Only later the character of the word did change from a proper name to a technical term for river deltas, now explicitly in terms of the triangular shape of the letter. The generalization becomes clear in Arrian's Alexandrian Anabasis on Alexander the Great at the beginning of the second century BC, where the mouths of the Indus, the Danube and the Nile are compared and referred to as deltas.

How does a river delta arise - deviations shown by Manavgat river 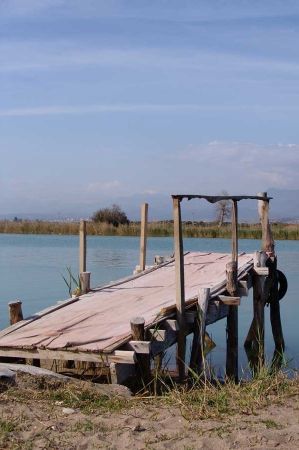 A delta estuary on rivers arises when in the mouth area of ​​the river whose flow velocity is decelerated to virtually zero, so that he deposits most of the previously entrained material as sediment. As the sea level remains fairly constant, the river continues to shift its mouth over the centuries and millennia into the sea, by continuously dumping its sedimentary cargo, and the former estuary is silted up. Its own deposits increasingly block its way to the sea, so that the main stream is forked up several times. In this way, the characteristic delta shape is been  created, as to be seen in maps and satellite images at many estuaries. A prerequisite for the formation of delta estuaries is a small tidal lift in the mouth area, since otherwise tidal currents prevent the undisturbed infiltration of a mouth fan.

During the centuries, the former river delta of the Manavgat River has developed into sediment deposits, on the one hand, and the sea surf, on the other, creating this unusual channel situation that stretches for kilometres parallel to the sea beach. The sediments carried by the river ensure, besides the sea surf, that the river blocked its access to the sea itself, so that the canal could emerge.

Tourism development does not stop here either Unfortunately, there are now seven luxury hotels on the banks of the Manavgat Canal. A Sacrilege, as a reader accompanying our article was explaining. However, the city of Manavgat has built a combined foot and bike path parallel to the river that leads from Boğaz to the city. That is a very positive development. Blessing and curse of development!
We thank you very much for the additional information.