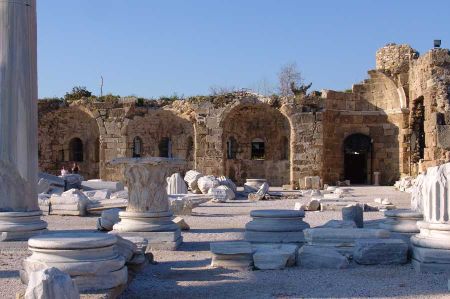 The museum where the finds from the excavations are exhibited is situated in the Agora thermae, a restored Byzantine bathhouse on the columned street opposite the agora. The entrance was from the north west towards the water where there also was a columned sportsground, now a garden.

From this entrance one entered the cold baths, frigidarium, and then to the sweat room, sudatorium. The third and largest room had the warm baths, caldarium* (d), with central heating under the marble floor. From here one went to the less warm transitory room, tepidarium* (e) where one stayed between the warm and cold baths. All 5 rooms used to be vaulted, now only 3 are roofed. The building was erected in the 5th century and used to be covered with marble. It probably replaced the 2 Roman baths in the harbour area outside the new wall that was built in the 4th century. At one time they have stopped using the baths, maybe because the water supply failed or because they could not procure the enormous amounts of firewood necessary for the heating, and instead they used the building as a burial ground. A couple of skeletons with intact teeth in the caldarium are reminders of that.

Open Air Museum par Exellance - you will love it! 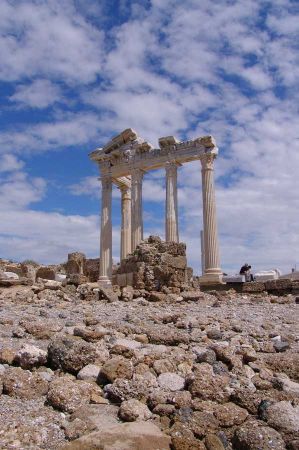 Today the entry to the area is via a Roman road with wheel marks and granite columns on either side. Next to the entrance lie some big round  boulders that were used by catapults to break down the town walls during a siege. Tile pipes that brought water into the building can also be seen in the walls.

One enters the museum through the changing room, apodyterium, which today is without vault. There are some inscriptions, translated into English and German, and a Nike statue with  spoils of war under her feet. The statue is from the 2nd century AD and used to stand on the main gate. The statue shows the winged and victorious goddess on her way from heaven to the earth.

In the first gallery, frigidarium (b), also without roof, one can see the marbled semicircular cold water tub with a Roman sundial in the basin and one on the edge. The oldest find is to the left: a 1metre high base of a column of black  basalt of late Hittite origin, 7th century BC, found at the Athena Temple. Opposite the basin are the weapons reliefs from the East Gate, illustrating spoils of war such as helmets, armour and swords.

From the frigidarium a door leads into the round vaulted sudatorium (c), where jewellery, glass and statues are displayed. Both floor and walls were heated, as there were cavities between the original marble covering and the walls. A couple of pipes that led warm air into the cavities are still visible where the dome begins. From this room one could alternate between caldarium and tepidarium. 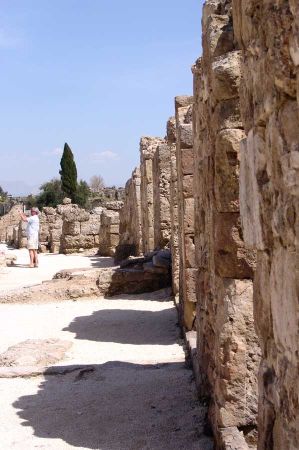 The caldarium is the biggest room and contains 5 basins, the largest in the gables. These are the original pools while the 3 semicircular basins on the long side have been added later. One can still see the earthen and lead pipes in the walls, and a hole in the floor reveals the cavity where the heated air from the central heating system circulated and created a pleasant floor heating. The exhibited items stand in niches. In 2 niches by the big pool there are statues of dressed women from the Hellenistic period. Left of the basin by the door to the steambath stands a funny side of a sarcophagus with a little dog looking out.

In the niche left of the semicircular basins is an interesting relief depicting the punishment of  Ixion. It is from the 2nd century BC and comes from the nymphae-um* by the main gate. In the Greek legend Ixion was a young man who promised to bring gifts to his father-in-law if he were allowed to marry his daughter. He got the daughter but broke his word after the marriage, so the father-in-law got angry. But Ixion invited the old man to his house and pretended that he wanted peace and that he would give him the gifts. Instead the poor man was removed from the table and thrown into the flames where he burnt to death. This horrid murder repelled both the humans and the gods and no one would forgive Ixion. However, although he was despised by all he managed to ingratiate himself with Zeus, king of the gods, and he received forgiveness. He even managed to be invited to eat with the gods. But here the brazen young man’s luck failed him. He betrayed the good Zeus by casting lascivious glances at Zeus’ wife, the virtuous Hera* and even declared her his love. Zeus got mad and conjured up a cloud that looked like Hera and sent it to Ixion. Ixion had had plenty to drink of the gods’ nectar, the wine of immortality, and embraced the sight of Hera. Then Zeus tied up the ungrateful young man to a burning and turning wheel and condemned him to eternal torment.

Melas River and Harbour brought traders to Side 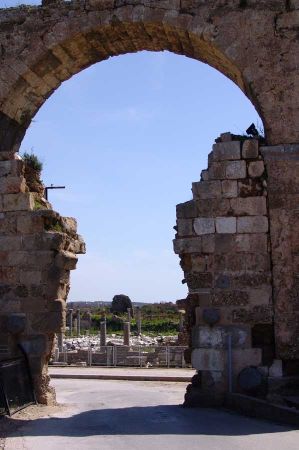 Close to the Ixion relief is a statue of the river god, personifying the Melas River (present day Manavgat) which symbolically runs out of a container held in his arms. Previously the rivers and streams that gave name to towns were considered deities and were usually depicted as recumbent and resting male persons.

In the middle of the gallery stands the brave hero Heracles with the lion skin ready for one of his 12 dangerous exploits (see also under Alanya Archeological Museum). He had to find the garden of the Hesperides in unknown land with precious trees with golden apples. He was to pick the apples and bring them home. Heracles found the garden at the end of the world, but the entrance was guarded by the giant Atlas, who as a punishment had to carry the world on his head and shoulders. Heracles asked Atlas how he was to get the golden apples. Atlas promised to fetch the apples if only Heracles would hold the earth in the meantime. Our hero agreed and held the world, but when Atlas came back with apples he refused to give them to Heracles. Heracles realised he had been taken in but pretended not to take it hard. “That is all right”, he said, “but please hold the world for a while so I can get myself a pillow for my head”. The naive Atlas did not suspect anything and put the earth back on his shoulder again. Immediately Heracles snatched the apples and disappeared. That is why Heracles is standing with apples behind him on the statue. It is from the 2nd century AD and was found in the columned street by the theatre.

Opposite the door to the tepidarium are the 3 Graces, Aglaia, Euphrosyne and Thalia, all daughters of Zeus - symbols of grace and beauty and a recurrent motif from the Hellenistic and Roman periods. This group was excavated in the theatre and goes back to the 2nd century. The group may represent the 3 goddesses Athena, Aphrodite, and Hera, whose beauty contest started the Trojan War. In the gable basins are the mentioned skeletons and small sarcophagi that were used for ash burials.

The next door leads to the tepidarium with god statues of  Apollo, Ares, A-sklepios, Demeter, Nike and Tyche. A fine head of Hermes goes back to the 2nd century AD. One can see that 2 pieces have been added later, probably in the 3rd century AD. It is Hermes’ winged hat, which is broken off because it probably had to be reused somewhere else. That is why it was believed for many years that the head represented Apollo.

Hermes - the son of Zeus awaiting you 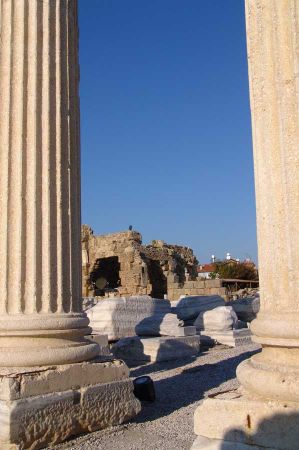 Another example of reuse is seen in the central niche with an imperial statue from the library. Judging from the style of the breast plate the statue can be dated to the 2nd century and probably represents Antony Pius (138-161). But the head, which depicts Emperor Licinius (308-324) is much too small for the body and stylistically it belongs to the 4th century. From the middle of the 2nd century hair and beards were depicted as long, coarse and curly, while in the 4th century it was cut off and and only marked slightly with a chisel. So the head is the original head made smaller. This method saved time and money and was quite common in late Roman times, when the emperors were often quickly changed. Another method was to put a new head on the statue.

The first statue in the left row in the middle of the gallery is a beautiful 2nd century copy of the famous Greek discos thrower from the 5th century BC. There is also nearby a copy of the Greek man binding his sandals.

In the right row stands a beautiful 165 cm high Hermes statue with a purse in his hand. Hermes, the son of Zeus, was god of the thieves, merchants and the travellers, and also the gods’ messenger to the mortals. He supports himself on a socalled herme, a square column with a bearded man’s head and a protruding, today broken off, phallos. In Hellenistic times these hermes stood in front of temples and private houses where people sacrificed to them as evident symbols of fertility. The statue is from the 2nd century AD.

In the open area in the middle of the gallery stands a round altar and 2 large beautifully decorated sarcophagi from the 2nd century AD. One has a roof shaped lid with wine drinking erotes on the sides and the winged Nike in the corners. The other one shows a male figure (the deceased) resting on the lid, which is formed as a bed. On the sides are playful children who enjoy themselves, get intoxicated and play various instruments, and on the other side is a sacrificial act while the last side depicts two griffins.

Several sarcophagi, column parts, urns, mosaics and other fragments are exhibited in the garden. Among other things there is a number of friezes showing Poseidon*, god of the sea, found in the Harbour Bath.
Open summer: 9-19.30. Winter: 8-17.00