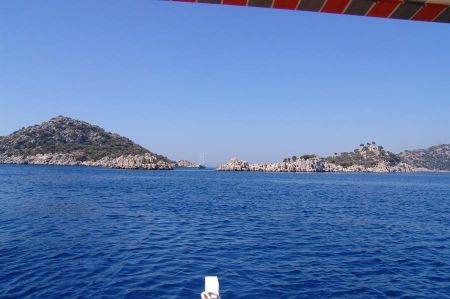 Mysteries of the Ancient World appear inside this Triangle. Kekova is a Mediterranean island near Demre district of Antalya province which faces the villages of Kaleköy (ancient Simena) and Üçağız (ancient Theimiussa). No one lives on the island.

Sıcak Peninsula which stretches parallel to the coast and Kekova Island together form Ölüdeniz which is an inland sea. The silent and calm inland sea resembles like a huge lake with many small islands strewn into it. Because of earthquakes and geological influences the land divided and still does. The today island Kekova is famous for its underwater ruins. The submerged city can be found while sailing along the shore. This historical town seems to be like from a fairy tale of ancient times.

Today Kekova not only is the approx. 7 km long island, it means the Castle of Simena surrounded by a picturesque village, Aperlai Ancient City on Sıcak Peninsula, Theimiussa in Üçağız village and the whole region as a coastal segment. The shortest distance between the island and the mainland amounts to just 500 meters and the sea is more than 100 metres deep in the area here and there.

The region was dominated by Lycian civilization for long years, then Roman and Byzantine Empire, still rich historical heritage of ancient civilizations (on the shore or in water Lycian type sarcophagi, breakwater and the ruins of buildings under the water or on the land, the theatre carved into the rock inside of Medieval fortress, rock tombs, water cisterns, in the north necropolis consisting of a small number of sarcophagi and rock tombs, the ruins of the tower on a low hill and ancient tombs in Theimiussa…) can be seen.

Kekova is a natural paradise blending nature and history along the clear, blue shore with its thousands of bays. By a boat you can paddle or hire a fishing boat, canoe or kayak comfortably about the crystal clear water and watch the foundation walls of several buildings and ruins. The reason for the sinking of the town can be seen in the fact that the volcanic underground is still active and so the massive island slowly sinks down. Here and there a sarcophagus rises from the water and one has to observe the chance to catch many different kinds of fish. Since it is protected region, swimming and diving is forbidden in the area of Sunken City.
Kekova region was declared a Specially Protected Area to protect the natural, cultural and geographic richness of Kekova Island and surrounding coast. Kekova Specially Protected Area is 260 km² and is managed by the Ministry of Environment, Authority for the Protection of Special Areas.
The area consist of an active coast starting from Ulu Burun in the East of Kaş and in Demre Plain in the East of Kekova Headland and the island stretching along the coast.
Kaş-Kekova Special Environmental Protection Area encompasses the island of Kekova, the villages of Kaleköy and Üçağız and the four ancient towns of Simena, Aperlai, Dolchiste and Theimiussa.

Each cove in the region has a different beauty.
You will simply enjoy the wonderful water and go swimming at different places, most well known one is locally called “Aquarium” where there is flat calm water with the possibility to watch passing fish.

A Roman dockyard Tersane (Xera) Cove is in the inner coast of Kekova Island. Medieval ruins can be seen here.

During the Balkan Wars, Captain Hüseyin Rauf Orbay, commander of the famous Turkish warship Hamidiye, sheltered here called Hamidiye Cove. The Turkish flag painted on the rocks are a reminder of those days.

Gökkaya Cove is opposite of Asırlık Island. In the port area there are lots of smaller or larger islands and small ways through that resemble tiny fjord. Gökkaya is an ideal place of anchorage closed to the impact of all the winds and the waters are clean there. When you follow a footpath adjacent to it, you reach the antique city of Istlada, situated east of the hill.

Sıcak Cove was called Polemeos Cove is the sheltered anchoring point on the Sıcak Peninsula. From this cove you can get ashore and walk to Aperlai Ancient City in half an hour.

The entrance of Karalos Cove is not very noticeable. It is a small cove that just couple of small boats can shelter. You will be able to watch the fish in the clear water in this unspoilt area.

Some of other coves in the region are Değirmenlik Cove which karst springs run into the sea, Cankurtaran Cape, Çamlıca Cove surrounded by pine trees resembles hidden paradise.

Saklikent Canyon - an adventure of climbing and hiking