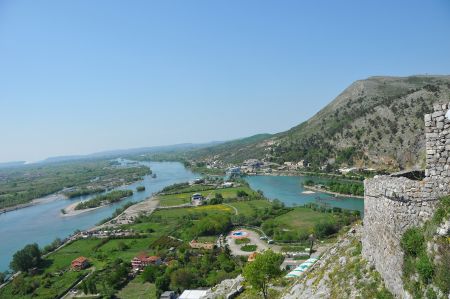 If you are traveling from Montenegro to the second largest city of Albania called Shkodra as a mobile home camper, you will inevitably encounter the outflow of the Lake Skutari, which is called Buna.

For campers, Campsite Legjenda is recommended, which lies directly on the banks of the Buna on a small peninsula; The Buna is a short but powerful flow of water from the Lake Skutari to the Adriatic Sea. The Buna also forms the border between Albania and Montenegro on about two-thirds of its length of only 44 kilometers.

Immediately after leaving Lake Skutari, Buna passes a valley between the Tarabosh in the west and the castle hill of Shkodra in the east. Shortly after Buna takes the main tributary called Drin, which flows through the Albanian Alps and originates from Lake Ohrid in Macedonia. The Drin has been an inflow of the Buna since the subsidence in 1858. Changes in terrain led to the Drin dividing and the majority of the water bodies seeking a new way west to the Buna. One and a half kilometers below Lake Shkodra, the two rivers unite, after the Drin had previously taken the small river Kir on the right side of the Albanian Alps.

The course of the Buna between Albania and Montenegro is still strongly natural and often muted. The mouth area itself is partly protected and because of its long sandy beaches also of tourist interest. The small delta is a bird sanctuary of international importance, which is used mainly by migrating birds as an important intermediate stay. The small Ada Island between the estuaries is a popular beach for naturist tourists. The island is situated entirely in Montenegro, since the eastern branch is the border. A sandbank in the branch between Albania and Montenegro is named after Franz Joseph I, which is named with Ishulli i Franc Jozefit in Albanian language - the island formed from alluvioins becomes a peninsula at low water level.

The river is crossed by two bridges shortly after leaving Lake Shkodra (also this spelling is used). Until 2011, there was only a single-lane, steel-lined bridge. In May 2011, a few-hundred-meter-long turning bridge was opened, facilitating the road traffic from Shkodra to Ulcinj. It was planned that the bridge should be opened in 2010, but the construction work was delayed because of the flooding in the Shkodra plain. In contrast to the wooden bridge, the new bridge also allows the passage of ships. Still, the old bridge blocks the passage into the lake.

With an average width of 150 meters and a depth of 3 meters, the Buna is considered to be navigable, but hardly any ships operate. Only some excursion boats can be chartered from Shkodra. In the second half of the 19th century a regular service was operated by the Austrian Lloyd. Before the Second World War it served as an important transport route, especially for goods from the sea port in Ulcinj to Shkodra. The waters of the Buna mainly origin from the Drin coming from the Albanian Alps. The catchments area of the Buna without Drin covers an area of 5187 km² around Lake Skutari, which is surrounded by the mountain range of Rumija and Lovćen in the west and by the Albanian Alps in the east. Thus, after the Po, it is the second largest inflow to the Adriatic.