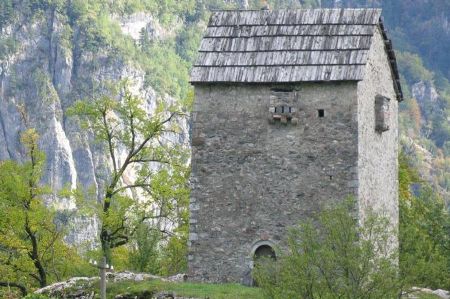 In and around Shkodra, the Albanian habitual right, often referred to as Kanun, was revived with the beginning of the 1990s together with the decline of the dictatorship of Envar Hoxha.

Without actually knowing this legislation, many people believed that they could practice blood trauma. Hundreds of families in the region were no longer able to leave their homes, men escaped into so-called escape towers (pictured) and became barricaded because they were threatened by bloodshed. In the meantime, many independent organizations and private individuals have been very successful in the reconciliation of the parties, which have always been hostile to everlasting times. Thanks to this mediation and the intensive use of the organizations, the situation has been noticeably relaxed in recent years. For example, only one or two blood murders per year were recorded in Qark Shkodra from 2004 to 2006.

The Kanun is the original oral law of Albanian customary law. In the northern Albanian mountains, as in the Kelmend or Valbona, the inhabitants were so isolated from the outside world by the local geographic conditions that here a medieval custom, possibly even pre-Roman custom, was preserved up to the modern age. This is, in his most widely quoted version, the Kanun of Lekë Dukagjini, named after a powerful prince who lived in Skanderbeg's time. The frequent thesis that Lekë (Alexander) Dukagjini (1410-1481) was the author or even the creator of this law collection is unlikely to be sure.

The Kanun had priority over state or religious legal systems. In Kosovo, this competition law especially flourished during the Ottoman period (15th to early 20th century). In the inaccessible northern Albanian mountains, the Ottomans, who occupied the country for about 500 years, had never really gained power. Thus they could not introduce their laws there. As a result of lack of other state power, the Kanun was preserved up to the modern age, but later under Serbian domination too. Experts such as the Canadian Albanian researcher Robert Elsie conjecture that the Kanun could still be reborn in the Kosovar highlands as a competition right to that of international peace troops.

The Kanun regulates the essential aspects of social behavior. An essential element is the honor of the man. It is well-known for his archaic and patriarchal values. Thus serious injuries of the law "are avenged with blood". Such blunts were inherited within the family, which in the past has always led to bloody feuds for generations.
The basis of the Kanun is actually life in the large family, where three generations under the leadership of the oldest man lived under one roof. The law collection regulates the areas of liability law, marriage and inheritance law, criminal law as well as church, agriculture, fishing and hunting law quite comprehensively. In the area of ​​criminal law, the Kanun is still characterized by the violation of honor, whereby the concept of God's peace is known as a partial aspect of the Besa. Since the Kanun is still deeply rooted in the thinking of the northern Albanian region, a conflict between modern laws and the Kanun often arises.

Women play a marginal role in the Kanun and have just little rights. They are considered "hose" (shakull), "in which the goods are transported", but are inviolable on the other hand, when there are breaches of honor. The woman is born to get children. Even one generation ago, the Kosovars followed these oral laws. Based on that even marriage also served to make useful family ties. The choice of the spouse was regulated by the fathers. The bride and groom saw each other on the wedding day.

Most important part in the Kanun is surprising and lovely to experience as a traveler. As guests, friends and those seeking protection travelers are treated in a very kind way. They are entertained and protected with the greatest possible effort. It is finished, when the guest has been passing over the village boundary and turned his back to the host - this is what is mentioned in the Kanun too - the duty of hospitality for the Albanian hosts.

Kanun is built on the honor from which numerous duties, negative aspects such as the blood gang, as well as positive aspects such as the guest law and the Besa derive. The latter can not be translated directly into English, but includes the terms "peace pact, alliance, armistice agreement, hospitality alliance, honor of the house, honor, oath, security guarantee, loyalty, loyalty and more." The Besa protects from the blood revenge threatened for certain times or places from persecution, and at the same time releases the person obliged to commit bloodshed to avenge a crime. The Besa could be arranged on the one hand between persons or families. It has been granted, for example, for important errands, field work, family celebrations or church holidays. The murderer was usually granted Besa for a certain period of time. In the Besa for cattle and shepherds, tribes allowed each other to travel the other tribal territory at certain times and on certain routes. The general Besa undermined all atonement during war time.