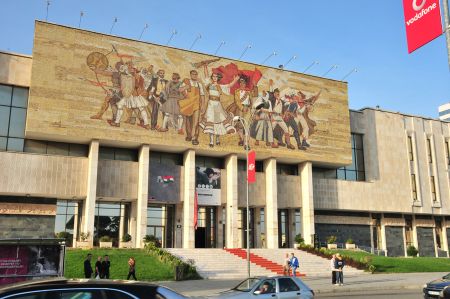 Tirana, the capital of Albania, lies on the west side of Mount Dajti on the transition from the coastal plain to a hilly landscape in central Albania. To the coast of the Adriatic Sea at the port town of Durrës it is only about 30 km of air line.

And while Durrës can look back on an imposing history and great importance already in the time of the Romans, Tirana has only grown to the present importance as the capital of Albania in the last century. And how fast this change is still taking place, we were able to experience several times as we passed the city. The fascination of hundreds of thousands of football fans on the streets and squares was quite impressive, as last year's participation in the European Championship took place.

To the south and west, Tirana is surrounded by hills, which form a green belt around the city with the Dajti, which is not necessarily expected. To the northwest a 40-kilometer-long plain opens up to the sea coast. On the northern edge of the town is the river Tirana and the river of Ishëm. A few kilometers south, the Erzem flows past Tirana. The city center is crossed by the river Lana, which springs from Dajti. The surroundings of the capital are characterized by many small, partly artificial lakes, leisure areas for residents and visitors. The best known is the Tirana Lake, also known as Artificial Lake (Liqeni artificial). It is located in the Great Park (Parku i madh) on the southern edge of the city center and was already built in 1956. At that time responsible people calculated eight square meters of leisure space for each of the then 150,000 inhabitants. The lake has an area of ​​55 hectares and currently new settlements being built on its southern bank. Other lakes or reservoirs are the Farka Lake east of the Great Park, the Paskuqan Lake between Tirana and the suburb of Kamza and the Kashar Lake northwest of the city, at the Tirana - Durrës highway. It is precisely here that a number of companies have moved into new locations.

Tirana had long time been small and unimportant, until the place was designated as the capital of Albania in 1920 at the Congress of Lushnia. Then, from a place with few thousand inhabitants, the town became the largest and most important city in the country. King Zogu built his palace here and by the help of Italian ministers a splendid street has been built. The first modern structures, including the central square, named after the Albanian prince and the public hero Skanderbeg, were created through urban development measures.

At the beginning of the Second World War, Albania was occupied by the Italian fascists. In November 1941, Enver Hoxha set up the Communist Party of Albania and Tirana became the center of the Albanian communists. They protested against the Italian fascists and the German Nazis. The city was liberated from the occupation on 17 November 1944 after a heavy, several-day struggle between the partisans and the German army, where numerous historical buildings were destroyed. A few days later, on 29 November 1944, Hoxha proclaimed the independence of Albania in Tirana.

In the time of communist rule, the city developed rapidly: Socialist settlements and factories - especially food and machinery factories - were built. In addition, the communist leadership continued with the cultural expansion of the capital and established numerous educational institutions and cultural centers such as the opera house, several museums, the film studio and a few theaters. The University of Tirana was founded in 1956. However, in the 1960s and 1980s, many historical buildings were destroyed in order to redesign the city center.

On 20 February 1991, demonstrators crashed the big-size statue of Enver Hoxha on Skanderbeg Square, which marked the end of communist rule. Albania began to open up and democratize politically and socially. In March 1997 Albania was again shaken by trouble. Foreigners had to be flown out, as during the operation Libelle by the german Bundeswehr.

In the 21st century, Tirana experienced an economic boom. Numerous modern high-rise buildings have been built. The majority of the streets were newly paved and labeled. Many trees were planted and parks were set up. A city and ordinance plan was completed. A sewerage project is being carried out by a Japanese company and large parts of the city have been cleaned. International companies and shops opened branches. Public transport has been partially expanded and new city buses have been acquired. An addressing system was also implemented.

Tirana is home to the largest museums, art galleries and other cultural institutions in the country. Among the numerous institutions are the Congress Palace and the Cultural Palace, which houses the State Opera and Ballet Theater and the National Library. The National Archaeological Museum, the International Center for Albanian Archeology, the National Art Gallery, the exhibition of folk culture, the Museum of Natural Sciences and the Museum of the Armed Forces are also centrally located.

Could we arouse your interest at least a little?

Tirana has become a cosmopolitan and interesting city. Here, as in many southern countries, hospitality is regarded and practiced as a great asset. Even with its own past is openly bypassed, so there is a tour around the remaining places of the communist dictatorship of Enver Hoxha. Unlike many other states, which are not willing to face their past.

Kruja - a center in the struggle for freedom against Ottoman

Koman Dam and Lake - more impressions about the ferry trip