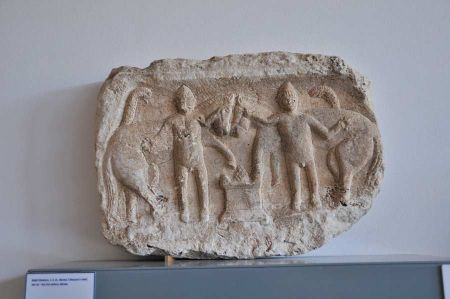 Again and again you meet interesting people on the go, so there was now again an encounter that resulted in a joint trip to the ancient Roman Narona, a former colony and trading town in Dalmatia.

Narona was once directly connected with Salona by a Roman road. The remains of the ancient city of Narona are located in the village of Vid, about 4 km west of Metkovic. The town center of Narona, today called as village Vid, was on a mountainside, about 58 meters above sea level, directly on the Neretva River, which has been navigable from its mouth up to after Narona.

Very little is known about Narona from written sources. Only Pseudo Skylax mentions the city as a Greek trading post, selling Greece imported products and goods into the Illyrian hinterland. The city probably existed as far as the 7th century, which can be supported by monetary and jewelry finds from this period. However latest research suggests even point to think about an even longer existence of the city.

The first systematic excavations were carried out at the end of the 19th century by the Austrian archaeologist named Carl Patsch. Through selective excavations he was able to determine location of the Forum and parts of the city walls, where he found a number of coins, amphorae and inscriptions. In the years after World War II experts of the Archaeological Museum Split took again some more excavations. They discovered, among others, a mosaic near the forum. The foundations of the early Christian basilica, located below the present church of St. Vitus, were examined, in which a well-preserved baptismal font was found. At the forum an Augustus Temple from the 1st century was brought to light. As well sixteen statues of Augustus' family and Roman officials and deities were found - beheaded and toppled from their pedestals - probably during the 4th century at the time of collection of Christianity as the state religion.

Today at this point the new Archaeological Museum Narona has been built, issuing about 900 other artifacts besides the reconstructed statues and its visit is totally worth it. In 1978 the archaeologist Cambi found the head of the Roman Emperor Vespasian from the year 75 AD, made from white limestone. Further excavations took place from 1991-1997, led by Emilio Marin.

Most information about the city was provided by the mentioned excavations: Residents Narona were initially, as already mentioned, Greek colonists and Hellenized Illyrian. Probably they found the city around 400 BC. The oldest discovered fortifications, two round towers on the hilltop, date from the 4th century BC. The city remained unattached from the eastern side, as the Neretva offered a natural protection. During the 2nd century BC Narona came into the sphere of interest of the Romans. In the year 156 BC, Narona served the Roman army of Gaius Marcius under the leadership Figulus as a basis, as lateron an army of Servius Flaccus. In the 1st century BC the city walls were extended up to that road, which led from Salona by Narona. After the conquest of Narona by Octavian in 33 BC, the city was a Roman colony and the population grew extrem. In Roman times a forum, several temples, thermal baths and probably the theater were built. At the time of Marcomanni wars (166-180 AD) the fortifications were renewed.

In Narona late Antique-Early Medieval weapons were discovered, among it five helmets. It is evidently hoards, so legacies that were once hidden aware there and later fell into oblivion. Within the helmets are two Spangenhelme type Baldenheim, a Spangenhelm type Deir el Medina / Leiden and two iron band helmets that infected in the Bald Heimer Spangenhelm. These artifacts are now in the Kunsthistorisches Museum in Vienna.
How in many places customary, numerous stone artifacts have been incorporated by the residents of Vids as ornaments in the facades of their homes.