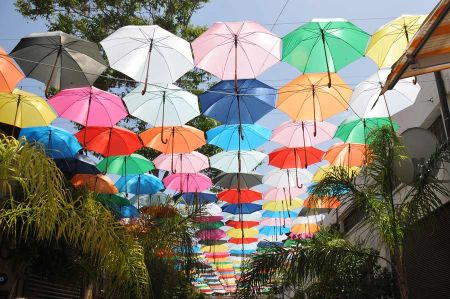 Within our project we visited Lefkosa / Nicosia, the still divided capital of Cyprus, which is at the same time and despite of that the largest city on the island of Cyprus with about 73,000 inhabitants.

The town is part of international law in its entirety to the Republic of Cyprus, however, since the occupation of Northern Cyprus by Turkish forces and the proclamation of the TRNC in November 1983 de facto does not exercise sovereignty over North Nicosia. Since then, the city is divided by a "Green Line", which is supervised by United Nations peacekeeping forces, the United Nations Peacekeeping Force in Cyprus (UNFICYP).

Lefkosa / Nicosia is the seat of government as well as many diplomatic missions, among others, the United Nations and the European Commission headquarters. Lefkosa is the last remaining capital on the earth, which remains divided in the Northern (Turkish) and the Southern (Greek) part. In 2003, agreements were achieved at least to allow owners with European passports to cross the border "Green Line" without lengthy approvals. Through continuous discussions, there are now seven such border crossings, which are open around the clock and also allows passage for vehicles. One of these border posts located in the center of Lefkosa / Nicosia at Ledra Palace area, where you will need to show your identity card or passport and can visit the other part of the city as long and as often as you like.

Next to the border and in some other municipalities too, the damages of the conflict of 1974 are still clearly visible. It will have to be the residents of the capital, which can ultimately eliminate these limits again completely, perhaps comparable to the situation between East and West Germany in Berlin years ago.

After a hearty breakfast at 8 am we are on the main road to Girne and stop a dolmus taxi to Girne - 0.75 TL. In Girne we get into a taxi for Lefkosa (Nicosia Greek) - 2.50 TL. With around € 2.20 we managed to reach the 30 km distance to the capital of Northern Cyprus, strictly speaking, to the northern half of the divided city Nicosia. A 350 m high summit of the Five Finger Mountain range that separates the Mesarya level from the narrow coastal strip has to be passed. This Mesarya level has its name probably due to its location between two mountain ranges, between which it is, namely the Besparmak (Five Finger Mountain) - and the Troodos Mountains. Approximately in the middle of running from west to east Green-Line, since 1974, separates the border between two states, North Cyprus from South Cyprus, Lefkosa.

On the bus terminal we find many buses and taxis of oldest type, often in terrible condition. We join the stream of people towards old city wall gate showing to Girne - Kyrenia. During the Frankish Lusignan time Nicosia was the capital of the island. The once completely surrounding Venetian fortress of the city center dates from 1567. The door nowadays stands alone, because British have removed the attached wall before 1960. Not far away, we visit a former Sufi monastery, Mevlevi Tekke, the monastery of the whirling dervishes, concluded under Atatürk. One sees rotational attitude established figures and listening meditative drum and flute music. In a long room cenotaphs of deceased sheikhs are to be seen.

Along the Atatürk Square with a column of Salamis, which carries a ball, we come to the "large yard", the Büyük Han, a beautifully restored hostel for pilgrims and traders. It has beautiful indoor and outdoor arcades, where there are now stalls with small shops. In the middle of the large courtyard there is a small two-storey fountain mosque.

Not far next we visit a Turkish bath called Hamam, a steam bath, once it was a Catholic church. It is lower than the street level, because the surrounding buildings have been built on the rubble of their predecessors. The bath is already 500 years old and still invites you to undergo an ablution. However, you should totally forget central European standards of aesthetics. An employee explains the various actions.

Soon after, we come to the beautiful Gothic church of St. Sophia (before 1571) from the 13th century. Since 1945 it is the Selimiye or Selim Mosque, named after a Turkish invaders of Cyprus. Here, originating from the crusade armies, the Kings of Cyprus were once crowned. 1571 the Turks came and since then this magnificent church has been converted into a mosque with two minarets being added. The entire interior decoration is missing, especially all pictorial representations of heads on the capitals.

Prayer niches were installed. Just some calligraphies catch your eyes, otherwise everything is whitewashed except the capitals. Thus a large amount seems to be somewhat broken. The floor is lined with carpets. This makes these giant hall even habitable again and invites you to stay.

Since 1571, there is a decaying church next to the mosque, once dedicated to Saint Nicholas. It got the name Bedesten during the Turkish period, that is a kind of market hall. Today the ruin is a meeting place of young people who may feel disturbed when Tetatete in remote corners. After the expiry of this, market moved right next to a new typical oriental bazaar.

It surprises that right now so big rush is seen in road construction. All platforms are open. Also, the duct system will be replaced.

Behind the Selim Mosque, we can visit a small, currently due to restoration closed empty library. It once contains about 3,000 books in various Oriental languages. Very nice, tight Kufic tapes from the Koran adorn the rotunda. The furniture for the bookcases are likely derived from an iconostasis.

A highlight for us is the Haydar Pasha Mosque, formerly the St. Catherine's Church from the 14th century. It is nearly completely empty, only one motorcycle is in it. But next to it, in the corner, we find a spiral staircase and through this we climb the minaret. The pigeon way up does not bother when the aim promises a fantastic view of the city. The Gothic building remains of the city stands out most.

Nearby there is also one more beautiful Venetian building from the 15th century. It includes construction relics from the Crusader period, grave stones, crest, sarcophagi. The building itself, particularly a Gothic window is almost watchable than the various stones with crest and heavily weathered capitals. Some wall-pictures explain the construction machinery in old churches or supplement drawing the lost parts.

Now it goes again towards the bazaar. Here you can see what people need in this area for living. They seem to be very modest: there are many kinds of vegetables, cheeses, fruits and spices, meat hardly, because this part of the hall is almost empty. Only in the surrounding streets there are textiles, clothing and fashion offered, especially for young people.

Along the clearly recognizable wall to the Greek part of South Nicosia, we come westward through a completely neglected area. In a park on the Rocca Bastion we can find a kiosk with beautiful views of a UN observation tower and continue north along the high fortress wall on the adjacent Greek part of town. Young people are at the chain-link fence and watch the the other side where there is much more lively traffic. The guys who run the kiosk offer free coffee, because we obviously honored as guests from Austria. You get more than the equivalent in euros. All this makes us very thoughtful.

We follow the old city walls overlooking the Ledra Hotel and come back to Kyrenia- or Girne Gate. We ask for an internet cafe and actually is not far away. Hotmail is called very quickly, but the Turkish keyboard is completely different from ours. The special characters @ I can not find. Problematic are the two i in Turkish, one with and one without i-dot. The sending of two emails may seem to be successful. But in the folder of the e-mails no entry appears. My idea was to confirm at home, but there is no e-mail arriving at home. Slowly we are increasingly clear, but this is a different country more then we have imagined. There is also no public telephone and from the entrance to the Old Town are lot of policemen, the security check is carried out.

On the way back to the bus terminal, we must there before 17:00, because later no Dolmus taxi goes to Girne anymore.

Thank you for this travelogue Mr. Weisenberg!