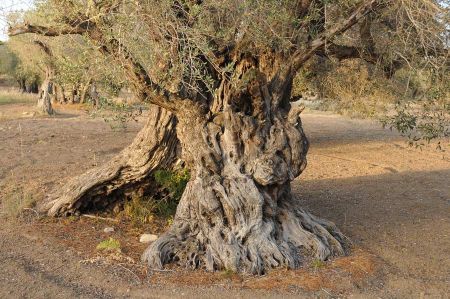 The olive tree needs a long time to grow big, but after that can get several hundred years old. Such and other miracles of nature, we should experience in Northern Cyprus during a trek that took us along the historic olive grove of Kalkanli.

Here the oldest trees origined from plantations of the Lusignan from the 12th century, many more trees were planted by the Venetians later on. The oldest known olive tree worldwide is estimated to be 4,000 years, since the interior of the tree, however, is missing, the existing material is at least 2000 years old, this tree is located in Vouves, in Crete, Greece. Another very old olive tree located in Tarragona, Spain, is more then 1700 years old, another 1200 year old tree still alive is in Castellón.

The olive tree grows as a richly branched, evergreen tree or shrub and reaches stature heights of 10 to 20 meters. The development and the growth of the roots is essentially dependent on the looseness of the soil. A loose soil causes a nearly vertical growth of up to 7 m into the earth, is the breeding ground firmly and rocky, the roots develop rather flat and form a branched network around the trunk. Generally, you will find the most roots, regardless of the soil, in about 1 m depth. Each main root of the olive can be associated with a particular main branch, is this branch being removed, the root in the ground degenerates too. The olive trees in the olive groves are clipped for better crop to keep them small. It generally the rule applies like that: the more crooked and gnarled, the better the yield.

In ancient Greece, the olive tree was the tree sacred to the goddess Athena. According to the legend Poseidon and Athena fought for supremacy over Athens and Attica, whereupon Poseidon let forth a source in Athens; Athene allowed to grow the first olive tree on the Acropolis. The Athenians decided that the olive tree is useful, and so Athena became city goddess of Athens. This olive tree was worshiped and burned when the Persians took the city. But a few days later it was casting out again, which was interpreted as a particularly good omen. In the Academy of the to Athena dedicated inviolable oil trees; they came according to tradition, the first olive tree on the Acropolis. In Attica it was forbidden even to an owner to cut an olive tree. The crown, which was awarded to the winners at the Olympic Games, was wound from the branches of wild olive. This was, according to Pausanias, Diodorus and Strabo from dactylic Heracles - not to be confused with the well-known hero - brought from the Hyperboreans to Olympia.

The God of Oil winning was Aristaeus, who was especially venerated in Sicily by the olive grower. The olive tree probably came to the island in the 7th Century.
In Homer, there are numerous data on the use of the olive tree. So the wood of wild olive was used because of its great strength for making ax handles. The oil was used for anointing the body, however, it was the rich and noble reserved as a luxury, as described in the Iliad.

The olive tree in Homer

"But the Atreid ', undressing the sword full silver bumps,
Sprang ascend to Peisander. He raised his gleaming ax
Under the shield, the ehrne, adorned with the stalks of olive tree,
Nicely smoothened and long; and they pressed against each other at the same time. "
(Homer: Iliad, 13 singing, 610-613)

With Wolfgang Dorn for Güver Canyon next to Antalya