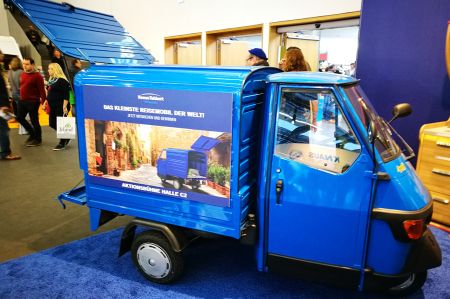 Motor homes are motor vehicles with an interior fitting suitable for the home, so at least the official classification of these vehicles is described, whereby the vehicle base is usually a mini van.

The course crossing the exhibition grounds of the CMT Stuttgart once again shows how much the vehicle base, but above all the interior setting of the camper itself, has adapted the sometimes unusual wishes of its users and the equipment variants required by the customers for various purposes. From the statistics of the manufacturers' associations, the sales figures still speak a very clear language, as the industry is still growing at a rate, which leads at least partly to overcrowded camp sites or camper stops, particularly in the summer months. In Germany alone, campers have 3,740 camper stops (not campgrounds that accommodate additional campers), which can be seen in the same way with 3,740 different and most beautiful destinations or cities. However, as the statistics continues to say, it is by no means sufficient with regard to the increase in vehicles. Still an interesting prospect for many cities and municipalities, but also for private investors.

Above all our Austrian neighbors like to use the German pitches for local exploration, due to the facts, that the number of pitches in Austria is still rather small.

The first mobile homes originated in the 1950s on the basis of the VW Bus, the prototype of the mini van. The Westfalia-Campingbox was one of the first interior fittings for standard small transports. In contrast to later interior installations, it could be removed from the vehicle with only a few hands and remained fully functional. In the 1970s, a small transport company, which also had sanitary equipment including a toilet and a shower, was rented as a mobile home.
As a rule, modern vans have either a fixed high roof or a raised roof (also referred to as a lifting roof) in order to ensure standing height in stand-alone operation.

Motor homes equipped with an alcove, a sleeping area above the driver's cab, are considered to be the type of mobile home par excellence. Due to their optimal use of space and their comparatively favorable price, the popularity of the alcove vehicles is particularly evident in families with children. In addition to the good utilization of space, one advantage is the suitability for winter, since the non-heat-insulated driver's cab can usually be separated from the insulated living space. Disadvantages are the low ceiling height in the alcove, which often allows only a lateral roll-in of a ladder, the large overall height of the vehicle and the resulting high air resistance when driving.

A van is a small semi-integrated vehicle which has been designed for short dimensions and small width of the special design. This results in a more uniform impression of the driver's cab and residential construction as well as an even lower air resistance.

The fully integrated, also known as the royal class, are built on ready-to-ride chassis without a driver's cab, but with all the necessary units. These bogies are also referred to as cowl. The frame type - ladder frame, flat-bottom frame or depth frame - is used depending on the desired structure. The caravan manufacturer must therefore produce a complete insulated vehicle front with a windshield, headlights, windscreen wipers, etc. in the small series. The fully integrated offer a fully-fledged living space "from one cast". Similar to the partially integrated, the front and side windows require roller blinds or mats as visual protection and possibly additional thermal insulation.

The advantage of fully integrated vehicles is thus the maximum value of the housing, the significantly higher costs, which also result from the fact that the maintenance of the engine (inferior accessibility) and the cab components (small series) is more expensive than with the conventional vehicles.

Camper on truck frame with bay window and car garage, whereby the housing unit mounted on a standard truck chassis. Very large mobile homes can be realized, which is why the type is mainly used in the luxury segment. The permissible total mass of most of these vehicles is above 7.5 tons, which is why they can not be driven under EU law with a car driving license (class B, C1). Especially in the off-road sector, this group is becoming more and more important, as long-distance travels are increasingly gaining market to share in their own vehicle.

Buses were often hobbyists or former coaches or trucks, which were developed in individual production for residential purposes, and thus significantly larger than most of the mobile homes built on mini vans, today there is hardly any gap in the so-called luxury segment.

But check yourself - the selection of the criteria and their implementation are impressive.

A camper Cultural Trip from Albania to Macedonia and Greece