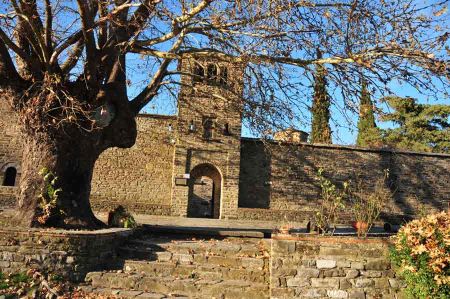 Only a few hundred meters away from the border with Albania, in the Konitsa region, the Monastery of Molivdoskepasti, dedicated to the Domitian and the Virgin Mary, is situated since the 13th century.

Throughout all the year round, George explains to us during the journey, especially every 15th of August, thousands of pilgrims pour in to kneel at the icon of the Virgin Mary and pray in the sacred and peaceful environment.

Temples and monasteries of the region show the "steps" of the Virgin Mary in Epirus near Konitsa over the centuries, they are religious monuments that are preserved in the villages, on the mountain slopes, near rivers and are places of worship.

Monks, but also pilgrims, ask for miracles here, especially attractive for childless couples praying to the Virgin Mary for a baby. Visitors to the Molivdokskepasti Abbey say, "When you enter the temple, you feel a vague energy, especially in front of the wondrous icon." Historical sources and mythologies tell of the miracles around the Virgin Mary.

One of these mythologies had once shaken the region: a Turk had stolen the icon from the abbey and brought it to his house, which after this incident caught fire and was thereby destroyed. The icon of the Virgin Mary remained intact and was returned to the abbey.

From a distance, the monastery looks like a fortress and is located in a natural environment full of trees, about 17 kilometers from Konitsa, at the foot of Mount Nemestrika, near the border with Albania, as shown in the pictures. The monastery was built in the Byzantine style with dome, with a carved choir border from wood and with hagiographies. In the past, the abbey had a roof covered with lead.

Murals and icons in the monastery Molivdokskepasti

The abbey shows royal features because it was built in the tradition of the region of the emperor Konstantinos Pogonatos, as that of returning from an expedition to Sicily 671-672 BC. Seven centuries later it was renovated by Andronikos Palaiologos. On the western side of the abbey there are murals depicting the two emperors. The abbey was also governed by the Patriarchate of Constantinople. Unfortunately, taking photos inside the monastery walls is prohibited.

Monastery Molivdokskepasti in the Middle Ages and the modern era

From the 12th to the 17th century, the monastery was the headquarter of the Pogonic Archdiocese, while from the 14th century there was a faculty of manuscripts. The preservation of the abbey during the Ottoman rule was particularly important for the local believers, but the Ottoman rulers were very tolerant.
The monastery was bombed in July 1943 during German rule, whereby the cells and the dining room were destroyed, little later the Nazis plundered the monastery Molivdokskepasti.