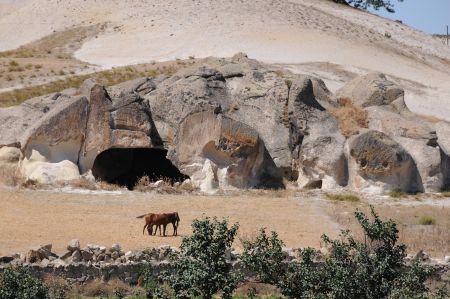 Our tours through Anatolia had led us to the so-called Phrygian Valley next to Afyonkarahisar, a term for the group of people settled there from the West.

"Phrygian" is the Greek name of a group of Indo-European people, which were migrating to Anatolia no later than the 8th century BC where they had erected a great empire between Ankara and Afyonkarahisar. The capital of the Phrygian Empire was called Gordion at Sangarios river (today's Sakarya), about 80 km west of today's Ankara, further urban centers were Midassadt and Kelainai.

In the Ilias, Homer mentions the Phrygians as allies of the Trojans at different points. According to him they lived in Troas at the time of the Trojan War, as well as beyond the Dardanelles in Thrace. In a passage of the Ilias it is said that during Priamos' youth, Phrygians had opened their first camp at the Sangarios. Not just because of Homer had mentioned, but also because of their burial tradition in tumuli which was taken from their former home in Thrace to the new settlements.

At least two other ancient sources report that the Phrygians still used the name "Bryger" before their emigration from the Balkans. Julius Pokorny etymologizes this ancient indogerman word as "appearing from the mountains". The Iliad also reports that Venetoi, Veneti, was situated on the northern frontier of Paphlagonia, near the Black Sea, but south of the coastal plain. When both groups came to Anatolia together around 1200 BC, this points to an origin from the northern Balkans. From there also the group of Myser appeared, also known as Dako-Myser, from Dacia, today known as Romania.

Until a few decades ago, there were really no traces of Phrygia from the time before 750 BC. The early history of this people was completely unknown. In the meantime a clearer picture emerged: Gordion was already settled in the 12th century BC, shortly later the city was abandoned by the Hittites. The ceramics of the new inhabitants partly show strong similarities to the approximately simultaneous so-called Handmade Knobbelware from Troy. Another type of ceramics in Gordion from that period is regarded as the forerunner of the so-called Phrygian polished ware of the 8th century BC. Similar findings also appear in other places of Central Anatolia (eg Hattusha, Kemal Kalehüyük), where currently excavations are continued. In the 12th century BC people settled in Central Anatolia (especially in Gordion), who made ceramics in Northwest Anatolian tradition, which is proved by ceramics.

In the course of the next centuries a culture developed, what was then termed Phrygian culture, which was governed by a great empire in the eighth century and which was probably developed by mixing with Anatolian elements. The new arrivals built pits as well as half-timbered buildings. This is characteristic for the architecture of Gordion in later times. The recessed buildings and the socialized coarse ceramic are difficult to assign. They may be in the ancient Anatolian tradition. In Gordion, at the beginning of the Iron Age, various groups were apparently settled, the historically intelligible Phrygians and their culture probably resulted from a fusion of different groups of the population.