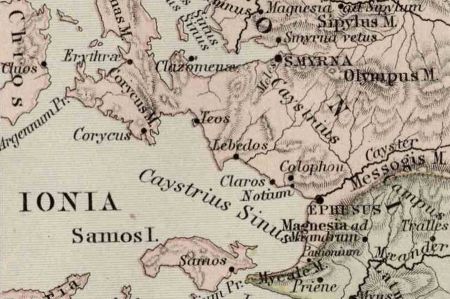 One of the most important figures of Greek antiquity was the philosopher and poet Xenophanes, who was born in Colophon around 570 BC. As was usual for artists of the time, the poet could not stand the monotony of a city for long.

So he used the expulsion from his hometown of Kolophon at the age of 25 to look for the then "big and wide world". Until his death around 470 BC, Xenophanes wandered through the then Hellenistic empire, probably even as far as Egypt.

The many personal experiences and insights of his years on the road made Xenophanes one of the first "lateral thinkers" in ancient times, if not in human history, who was hardly understood by other philosophers. Plato and Aristotle commented on Xenophanes that his teachings remained completely unclear to them, so that Aristotle considered him a very "simple" thinker. Heraclitus formulated a sentence with the following wording: Even by getting to know many things, Xenophanes had not learned to understand.

What was special about Xenophanes' way of thinking? 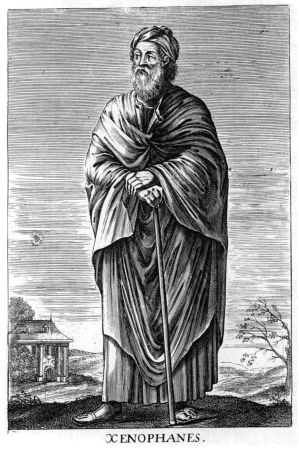 With the discovery of a fossil find on a mountain, Xenophanes came to the conclusion that water must have covered the entire earth in ancient times. How else could such a fossil get on the mountain. From this, Xenophanes further concluded that all life originated from water and earth, which led to the primordial mud theory

referred, and in the end would become water again. In his cycle of life, the earth would then be swept away by the water so that new life could arise. Xenophanes was an early follower of Neptunism, a now obsolete geological view that all rocks are sedimentary rocks and must therefore have been deposited in the oceans. Today we know that, in contrast to Neptunism, it is the doctrine of plutonism, or rather volcanism, that was of immanent importance in the history of the development of the earth. For Xenophanes, the sea was the origin of the clouds, which in turn formed the sun and the stars. Xenophanes considered the rainbow to be a special form of clouds.

"Xenophanes is an anti-Homer in the guise of the Homeric singer". 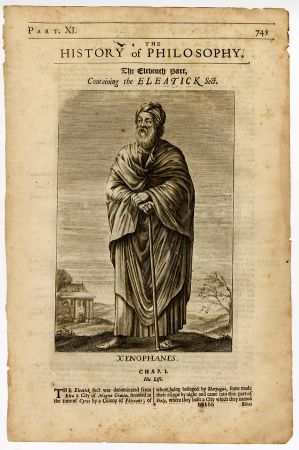 Xenophanes also wrote very analytically and somewhat satirically about the Greek gods, saying that the similarity to humans and the multitude of worshiped gods was very strange "man-made". He publicly criticized Homer's and Hesiod's concept of gods. A previously unimaginable process. "If the horses had gods, they would look like horses", a religious-sociological approach of Xenophane, which Albert Regenfelder commented as follows: "Xenophanes is an anti-Homer in the guise of the Homeric singer".

For Xenophanes it was clear that it was not the gods who created the people, but the people who created their own gods. A very accurate finding 2500 years ago, which should have been thought further.

Xenophanes concludes from this an early form of monotheism in which God is eternal, unitary, immovable, and of perfect form, as he reports in his major philosophical work, On Nature. The local deities, the pantheon, can certainly be preserved.

Xenophanes is therefore often viewed by scholars as a forerunner of critical rationalism. This also applies to Karl Popper, who says that “human knowledge consists of assumptions and the truth often does not appear to be recognizable as such. However, it is quite possible to gradually approach the truth: "The gods did not show mortals all that was hidden from the beginning, but gradually they find what is better in search."

Xenophanes' rationalism led him to an equally agnostic position in relation to the gods. Although he did not question their existence, he judged that man can never know anything certain about the gods.

There is little other evidence of the philosophies of Xenophanes from antiquity, only isolated remarks from the writings of other philosophers. Xenophanes is considered an important representative in a time of change, which is why he is considered by later philosophers to be the "petrel of the Greek Enlightenment", in the spirit of Hegel. Werner Jaeger says: "the first Greek thinker who can be grasped as a personality".

Mimnermos from Colophon - just a poet?

Ancient Colophon and its port city of Notion