Alongside the painter Apelles and the philosopher Xenophanes, the poet Mimnermos (around 640 – 570 BC) was probably the best-known citizen of the city of Colophon, which was booming in the 6th century BC.

Even if the exact dates of his life have not yet been clarified and only parts of his works have survived, Mimnermos was one of the great Greek poets and philosophers.

Mimnermos is generally regarded as the founder or forefather of the lamentations, the so-called elegies, which are mostly based on sad, plaintive stories in content. In ancient Greek literature, elegy was understood as a poem whose verses were written in pentameters. Later, the philosophers developed these poems in the form of distichs composed of pentameters and hexameters. Initially songs of praise for wine, the themes quickly change to war songs and lamentations through to songs of mourning and lamentation. Euripides (484 - 406 BC) then later used the original character of the elegy as a lament, as becomes clear, for example, in his tragedy "Iphigenie auf Tauris", where it was described as "barbaric lamentation of Asian melodies". 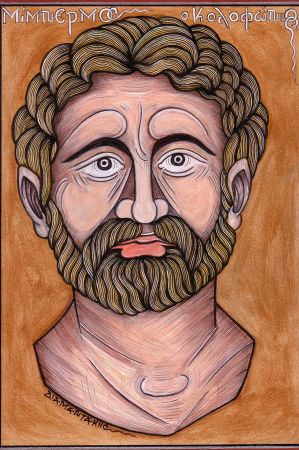 In addition to Mimnermos, the poets Callinos, Tyrtaios and Solon should be mentioned here, in Hellinism Callimachus of Cyrene developed the elegy into an artistic and precious poetry. In Roman antiquity, the tradition of this poetic art is continued by figures such as Gallus, Catullus, Tibullus, Properz, Ovid and Martial. Even in the last few centuries, poets such as Friedrich Gottlieb Kloppstock, Johann Wolfgang von Goethe, Bertholt Brecht, Friedrich Hölderlin, Friedrich Schiller, Rainer Maria Rilke and Annette von Droste-Hülshoff were still writing elegies.

Mimnermos of Colophon grew up in the beginning of the crisis, in which the Ionian cities tried to defend themselves in struggles for independence against the Lydian kings, who were becoming stronger. His verses, initially categorized as love poetry, now shifted in content to the struggle for independence and the increasing, as he called it, "effeminacy" of his countrymen compared to the bravery of those who had once defeated the Lydian king Gyges.

Many of his most important poems were dedicated to a person named "Nanno" or even named after her, who was probably his lover. This is particularly true of a set of lamentations addressed to Nanno, the flute player. Mimnermos also dealt heavily with the contrast between love-stricken youth and sorrowful old age, a theme that is a recurring motif in the collection of his two-volume poetry. But historical themes and of course mythology also play a major role in the surviving records, which later serve as a basis for the Alexandrian and Roman elegiacs, often with instrumental accompaniment in the lecture.

let me die as soon as this pleasure arises,
Tender love affairs, hugs and secret bed play!
Blissful youth May blossoms are men and women
Quite enchanting: but when the sour old age approaches,
Which makes the ugly man equal with the handsome one,
Then the senses are constantly darkened by peevish whims,
And only with displeasure does he see the heavenly light,
Because he is despised by women and hates boys.
So the age of God is filled with troubles. (p. 60)

Some facts about life of Mimnermos 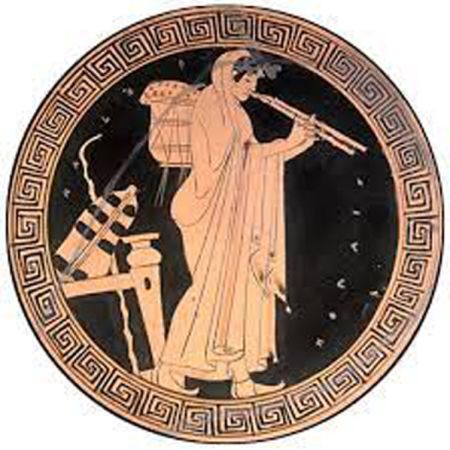 Mimnermos of Colophon (ancient Greek Μίμνερμος Mímnermos, Latinized Mimnermus) was a Greek poet who probably lived around 600 BC. lived. His works have survived only in fragments. Mimnermos was the first to use elegy as the vehicle for his love poetry. His creative period coincided with the crisis of the independence struggles in the Ionian cities of Asia Minor, which resisted the growing power of the Lydian kings. One of the surviving fragments of his poetry refers to this struggle, contrasting the growing softness of his countrymen with the bravery of those who would have once defeated the Lydian king Gyges.

His most important poems were a set of lamentations addressed to and named after a nanno. She was his lover and flute player. These poems were collected in two books. A recurring motif and main theme is the contrast between joyful youth and sorrowful old age, but he also included mythical and historical elements in his poetry. They were then followed by Alexandrian and Roman elegiacs.

The dates of his life are largely unknown, but descriptions of a solar eclipse point to the years around 600.

Apellicon of Teos - Collector of Literature