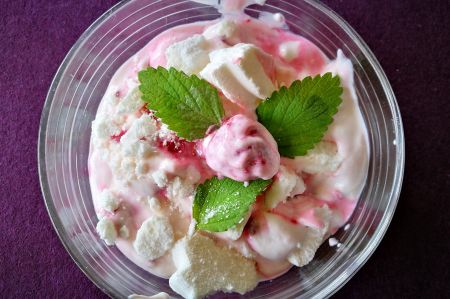 Although there are some gray clouds in the sky above the Neckar, the last few days have been splendidly summery.

In addition to wonderful bicycle tours and relaxing walks along the Neckar, we also had the opportunity to try some special dishes of the region in several restaurants, which were not completely clear to us at first because of their name. As an example, just "red sausage" should be mentioned here, which can not be missed on any barbecue, behind you will find a grilled sausage of regional origin hid, which is actually grilled here, while just heated in hot water in the north where it is called "Bockwurst". Learning is a constant progress.

After such a barbecue at our hosts, Heidi served a dessert, which was already looking very interesting in the bowl, and which then excelled us a little later: a mixture of whipped cream, yoghurt and fruit. Certainly so or comparable also known in other regions. Of course, we immediately asked for a recipe, which was answered only with a slight shoulder twitch. For long-standing experts in the kitchen certainly not a big action, so we asked again. Heidi was softened and described the components and procedures:

You should get fruit as much fresh as possible, in our case it was raspberries, which may be frozen for the freshness and also because of the cooling in the cream and the yoghurt. Especially during hot day temperatures the cold fruits contribute to the icy character of the dessert. You also need cream, yoghurt, who wants some vanilla powder and the special addition of Heidi: Original Meringue (of course, it also works with other meringues or self-made ones: meringue is a sweet mass of egg white and sugar that becomes dried in the oven).

Meringue is also called Spanish wind and is a foam pastry made from sugared egg or aquafaba. Baisers are dried at about 100 ° C for one to two hours, more dried than baked and should remain white to pale yellow. But now back to the dessert.

The cream is stuck and then stirred in the yoghurt. Also a part of the fruit, which can also be pureed, is added to the mixture and carefully stirred. Just the fruity red stripes give the dessert a great look. Now add all the fruits and put them under the cooler.

When it was time for the dessert, Rainer disappeared for a short time into the garden to get some leaves of lemon balm to decoration, which can be consumed without hesitation, and even contributed to the taste enhancement of the dessert. It was simply delicious. And so simple to do.

One taste of Greece - To the history of Kourambie Cookie