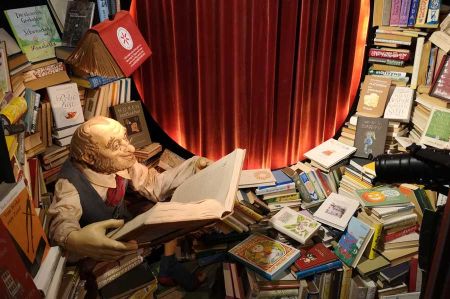 We took the tram from our accommodation to Anger, the central square in the Thuringian capital of Erfurt, and then walked across the elongated square towards the Krämerbrücke.

The Krämerbrücke with its historic half-timbered houses and the bay windows so worth seeing is one of the main attractions in Erfurt for us. After crossing the Krämerbrücke we became aware of a group of passers-by who were standing in front of a window with applause and enthusiasm. Of course, our interest was immediately piqued.

After a while the crowd of passers-by dissolved, so that we too could get closer to the shop window. At first we only saw a large dark red curtain of a stage, to the left of it a puppet figure reading the book Odyssey. A coin slot quickly put us on the right path, because the curtain on this stage should open the view to the mechanical puppet theater. Coins were quickly inserted and the show could begin. 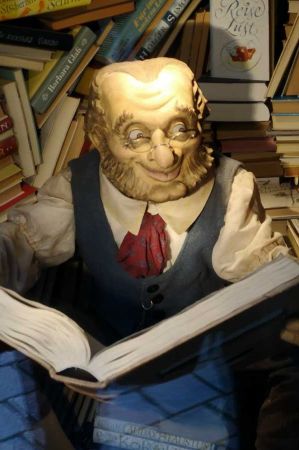 The creator of this Theatrum mundi is the puppet maker and stage designer Martin Gobsch, who is known as the mechanic. In the window of his workshop, the mechanical puppet theater has been attracting tourists and Erfurt visitors for more than three years. With the insertion of a coin, the scenery starts and tells of the experiences and adventures of King Odysseus of Ithaca and his companions on the return from the Trojan War. Alongside the Iliad, the Odyssey is the second epic attributed to the Greek poet Homer, making it one of the oldest and most influential poems in Western literature.

A component of puppet theater programs in the 19th century was often a “theater in the theater”, a “Theatrum mundi” or “mechanical puppet theater” with brightly painted figures made of cardboard or sheet metal, which were pulled across the stage on several running tracks. The individual figures were moved by eccentric wheels and sophisticated translations. The puppet director of the respective theater often built these mechanical show stages as well as his marionettes or Fantoches himself and therefore proudly described himself as a "mechanic".

As a forerunner of the cinema newsreel, the Theatrum mundi not only gave viewers a glimpse into the history of literature, but often also a glimpse into the wider world. It was a machine comedy on a small scale. The presentation of current events changed in the program with exotic and educationally entertaining pictures.

Theater director also a mechanic with a lot of reason 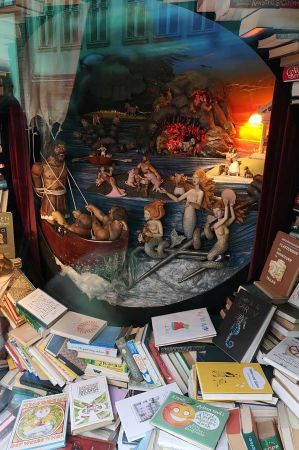 The expression Theatrum mundi "corresponds to the world view in which all the world goings on is a passing spectacle and as a result every human being has to play his role imposed by fate (in antiquity) or by God (in Christian theater)". As a literary motif and parable, it has been widespread in Roman antiquity since the Stoics and in the Middle Ages from Augustine. In the baroque theater, with Lope de Vega, Pedro Calderón de la Barca and Shakespeare, monologues of the main characters often philosophize about the acting character of life, about its volatility, outward appearance or external determination.

One should not mix mechanical theater with a panorama or any other institute in which one can see through glasses, but rather think of a real theater in which the acting beings appear animated on the stage through a meaningful and artistic mechanism. But while in a real theater the transformations of the sceneries take place almost exclusively behind a closed curtain, here the changes take place continuously without interruption of the action before the eyes of the beholder. The landscape and sky, night and day, sunshine and storm air alternate in endless succession. 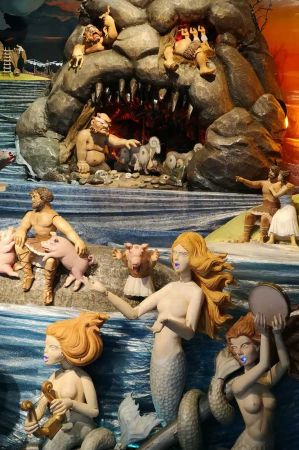 Sometimes the foreground is the blue sea with its foaming waves, on which three masters and steamships come and go, sometimes it is the country road or the open land, where people and animals act in a freest way. No conductive wire, no ruling hand can be seen, the wonderful gear does not reveal. Just the cleverly used research in the field of mechanics and the applied experience enable the rich action. Art and mechanics celebrate the same triumphs in this theater. "

The Theatrum mundi was already considered extinct. Just remains of it can be found in museums and archives. The mechanical theater, in which flat figures with the most elaborate mechanics in succession represented major historical events such as the Battle of Waterloo, the earthquake in Lisbon or the Carnival in Venice on several treadmills, was always a draw for visitors at fairs or as an attraction following a puppet theater.

Even if the stage design did not change here at the Krämerbrücke, the mechanics of the moving figures were impressive enough. A must during your visit to Erfurt. Have fun with it.