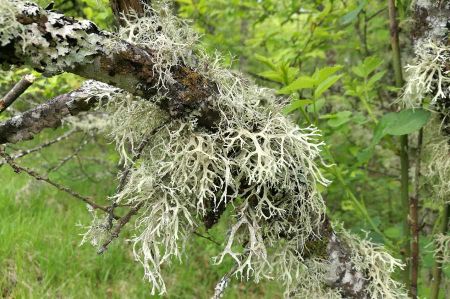 A short stopover at a small chapel within the surrounding trees on the way up to the ridge of the Jablanica mountain range along the border between Albania and Macedonia had attracted our attention with regard to striking greens at the trees.

Of course, we know mosses and lichens on trees from other countries too, but in this variety and density was new to us. So a targeted research was announced in the episode, which then surprised especially with regard to the use of mosses and lichens, what we will report about later.

Depending on the tree species, we were able to recognize two different lichens, but are not technically adept enough that there were no other species on site. Particularly striking was initially a lichen that grows almost shrubby on the trees. 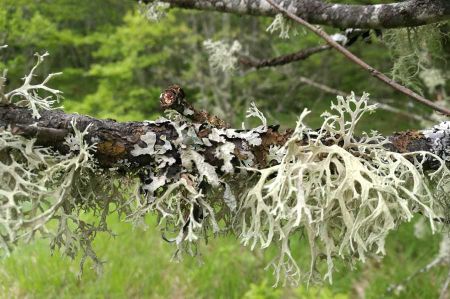 The name alone is a bit misleading, as it is not a moss but a lichen. The form of this plant lichen may be shrubby, bearded or almost leafy. The like band-looking outgrowths of this lichen are gray or blue gray. They are occupied on the upper side with coral-like pencils. The underside is, as long as the plant is young, white or pink, in the age bluish or black.

This species of tree lichen is found in cool temperate and subtropical climates worldwide. In Europe, it occurs from the mountains of southern Europe to central Scandinavia. It grows on the bark of coniferous trees and deciduous trees with sour bark (especially birch). In spruce forests of Central Europe, it often dominates together with the bladder worm (Hypogymnia physodes).

Other names include tree moss, bran or shrub lichen, from where the Latin word furfuraceus = bran for the specific epithet, the only species of this genus in Europe.

The moss, better the moose antler, is used as the moss (Evernia prunastri) in the perfume industry as "mousse des arbres". It is considered a strong allergen.

Evernia prunastri is a lichen species from the genus Evernia 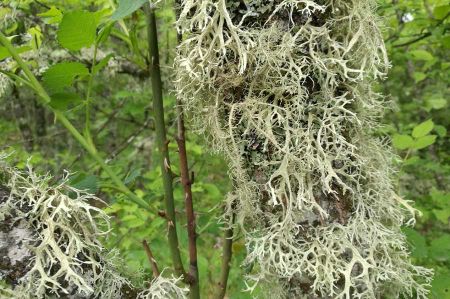 The lichens Evernia prunastri is also known as oak moss. Evernia prunastri also grows shrubby on trees. The yellow-green lichen grows up to 10 cm. It consists of up to five millimeters wide shrubby branched bands with a light underside. At the edges they break up dusty (Sorale). Apotheciens with a shiny brown disc are seldom made.

In Europe, from northern Fennoscandia to the Mediterranean up to the tree line, it is often found on the acidic bark of deciduous and coniferous trees, especially oaks (Quercus). At wind-open locations, she can cover the flanks of tree trunks with a dense woven carpet. It is one of the most common shrub lichens and is only missing in heavily air-polluted areas and in air-dry locations. The type of lichen is considered endangered in Germany.

Oakmoss is a basic fragrance of the perfumery and belongs to the basic chord Bergamott-Labdanum-Eichenmoos, which defines the perfume genus Chypre. It is allergic in rare cases; its use was severely curtailed by EU regulations, which led to the reformulation and deterioration of the formulations of many perfume classics. In southern France, the species is collected in large quantities in order to win in a complicated distillation process so-called "mousse de chêne" or "mousse odorante".