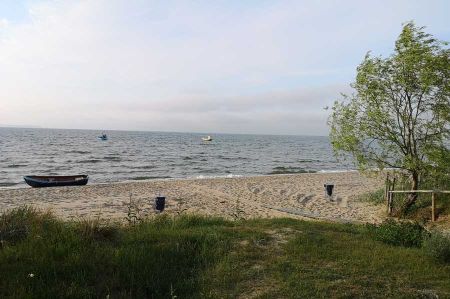 Once a major landing place in trade and for fishing, the landing place of the former fishermen of Rewa is located on the beach at the side of the Putziger Wieks, the Polish Zatoka Pucka.

The fishing village Rewa is located in the former West Prussia, about nine kilometers northeast of the city of Rumia (Rahmel, former German name of the town). Actually, the term pier is a much too big word. These are simply isolated boats that dock at different locations along the entire length of the beach and at the dock. Nevertheless, they complement the landscape of this small holiday village and create the atmosphere of a fishing port. Rewa is also known for its excellent conditions for windsurfing. A common image is the colorful sails that surf between the boats of the Rewa fishermen.

Zatoka Pucka is the western, shallow section of the Gdańsk Bay. The name of the bay goes back to the place Puck (Putzig). To the Baltic Sea, the bay (Wiek) is foreclosed by the peninsula Hel (Hela). The main ports are Puck (Putzig), Jastarnia (Heisternest), and Hela in the Polish Pomeranian Voivodeship. In the underground of the Zatoka Pucka is a potash deposit. The bay has an area of ​​about 364 km². The average water depth is just two to six meters. 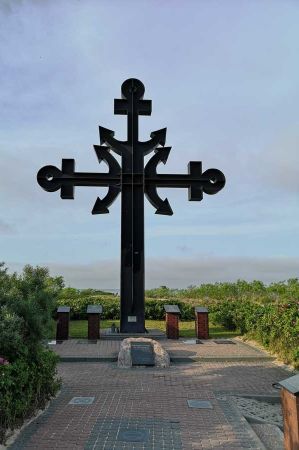 Zatoka Pucka lies between the fishing village of Rewa northeast of Rumia (Rahmel) and the village Kuźnica (Kußfeld) on the Hel peninsula, the starting point of a continuous narrow sandbar called Reff.

This sandbar is often submerged when the sea rises, leaving small passages as the water recedes, which can be passed by fishing boats; the deepest of these passages is called Kutznitza (Deepke, small depth).

Next to Hel, the area of ​​the sandbank Reff is one of the most popular places for windsurfers in Poland. The kilometers long, only 20 m wide sandbank in front of Rewa offers always mirror-smooth water in front of the wind or against the wind. In addition, the prevailing west and east winds blow pleasingly strong - just from south to southwest, the wind often is gusty. Ideal for speed and freestyle in the level or bump & jump in the troubled waters. However, it is often crowded with regular events, parties and competitions. Experienced windsurfers can surf 4 km northeast to the sandbar, which extends directly across the bay to Hel.

On the shores of the Zatoka Pucka settlement traces have been found, which indicate that the population living here traded since the time of the migration period at the latest trade relations to the Mediterranean.

Trade relations extend to the Mediterranean 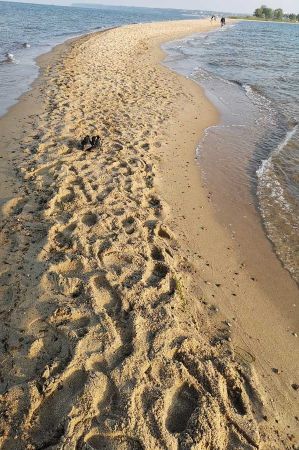 Byzantine gold coins (Solidi), which were discovered here during archaeological excavations, have apparently arrived in this area as payment for raw amber or processed amber.

As Amber Road various trade routes of antiquity (Roman Roads) are called, on which Bernstein came from the North and Baltic Sea south to the Mediterranean. Strictly speaking, this is not an amber road, but several independent trade routes that were used in the course of antiquity for the transport of amber and other merchandise.

Outside the Roman Empire, there were a few trade routes by which, since ancient times, amber has reached the Alps and Italy. The expansion of the Imperium Romanum to the Danube, probably under the reign of Augustus and Tiberius at the beginning of the 1st century AD, such a trade route was developed as a state road (Roman road) in the territory of the Roman Empire.

The winter-safe connection between Carnuntum on the Danube and Aquileia in Italy is called Roman Amber Road and is associated with the Roman road network. The course of this Roman amber road is listed in the Tabula Peutingeriana. Pliny the Elder (23-79 AD) reports that on this road amber had been transported from the Baltic Sea coast to Aquileia. 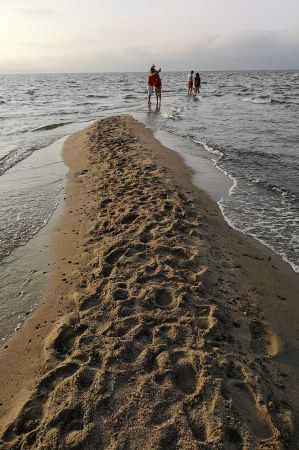 The trade route, which was already important in pre-Roman times, was very likely to run along the Vistula and its tributaries through the Moravian Gate, followed the March in Lower Austria and crossed the Danube at Carnuntum some 50 km east of Vienna. Pliny, the elder, reports in his Historia naturalis, "[...] that the coast of Germania from where the amber was introduced, was about 600,000 paces (about 900 km) away from Carnuntum in Pannonia (...)". The Samland coast is about this distance from Carnuntum. It is concluded that the amber comes from there, so the amber road described here, must have led into this area.