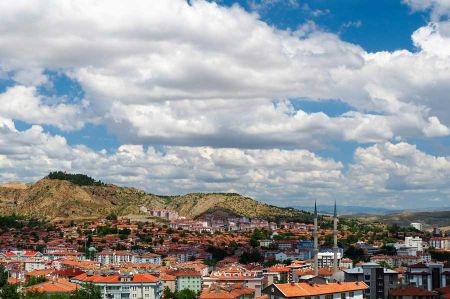 The city, like the Çankırı district of the same name, is located about 140 kilometers northeast of Ankara in a wide valley at about 800 meters above sea level.

Due to the geographical location of the 7,388 km2 provincial area, there are usually abundant water supplies, so that one can speak of a “green” valley with around 180,000 inhabitants.

People had already settled here in ancient times and founded a place that was initially called Gangra and later Germanicopolis. Often referred to as Germanopolis in Ptolemy's records, the place continued to change its name, initially to Kandari and later to Kanghari, depending on the local rule. Initially Hettites, Persians and Greeks settled here, later Parthians, Pontus Greeks, Galatians, Romans and Byzantines came to the region. They were followed by the Seljuks and Ottomans, and all of these peoples left their traces.

Kingdom of Paphlagonia with its capital Gangra

With the death of the son of the mighty ruler Deiotarus Philadelphus in 65 BC, the kingdom of Paphlagonia and its capital Gangra fell to the Romans, who incorporated it into the Roman province of Galatia. The first settlement was built on the hill behind the modern city, and the remains of a late fortress can still be found on this hill. The Romans settled on the opposite side, i.e. where the modern city spreads. Under the reign of the Romans the name changed to Germanicopolis, probably based on the name of the conqueror or one of Claudius' generals. This name was retained until the reign of Emperor Caracalla.

With the transition to Christianization, the city gained a certain importance, because an important church synod was held in Gangra, but the dates of the years differ greatly depending on the respective authors, so the year 341 and 376 are to find in the records. 21 bishops are said to have been present during the synod, looking for answers and solutions to the theses of Eustathius from Sebaste and his followers. At the end of the Synod, as is known, the doctrines of the Eustathians were condemned.

During the Byzantine period, two Arab invasions took place, after which the city was heavily fortified.

During the time of the Ottoman Empire, Çankırı became the capital of the sanjak of Eyâlet Anadolu, which later became the Vilayet Kastamonu.

We have 507 guests and no members online