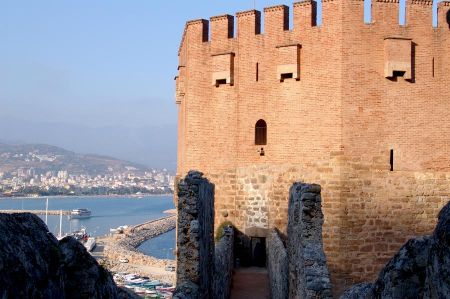 As the Seljuk Sultan Alaaddin Keykubat, after a five years lasting battle, conquered the city of Alanya in 1226, he started to work on plans how to protect the settlement in the future, within these ideas the Red Tower (Kızılkule) was built.

This monumental building is one of the incomparable examples of Seljuk architecture, which is the symbol of the city of Alanya until today. The Red Tower and the castle with its walls were designed and built by the architect and constructor  Ebu Ali Reha el Kettaniye, commissioned by Alaaddin Keykubat, who was originating from Halep (Aleppo) and who has built the castle in Sinop too. The Seljuks generally choose Syrian architects and stonemasons to build their forts, towers and ramparts.

The tower Kizikule was built to observe the harbor under constant guard and thus the shipyard next to it. The tower stands on rocky ground and has a diameter of 29 meters, the height of the tower is 33 meters. It was built by a diagonal plan. The construction works from the outside were relatively flat and easy. For the completion of the upper tower part dark red brick were used, because of that the name Red Tower was born. If you do not count the battlements at the height of the tower, the construction is of five floors. A large cistern is connecting the center of the tower at the top buttresses. For centuries it was used for military purposes.

On the walls of the tower, blocks of marble from ancient times can be seen. The remains of the columns particularly support the charm of the building. The loopholes and the narrow slits from which pitch and boiling water was poured on the enemy, are evidence of the importance that was attached to the functional side of the tower. The ground floor is entered from the west side through a little impressive, high and narrow gate, at the site where the tower adjoins the fortification. The octagonal pillars in the center are surrounded by a 3.5 meter wide archway. Along this corridor are vaulted rooms. These radiate expiring rooms take seven corners of the octagon, narrowing towards the outside of the building and terminating in a narrow, elongated loophole. The eighth rooms are connected to the front door and give access to the tower. From this door the first floor can be reached by a stone staircase.

The tower is accessed via a concrete staircase with 85 steps, which have a large increase, so that one tires easily. The stairs squirm parallel to the shape of the building up to the first floor. The small corner window, which can be seen at the top of the vaults of the central corridor, represents a connection possibility to the first floor. The ground plan of the first floor is more complicated. The rooms are much smaller and arranged in pairs in a corner. These are separated by the octagonal, pasted walls, in each of the angle formed by them is a vaulted room. In the northwest corner of this floor symmetrical double stairs replaced the openings. There is a door to the outside, it is located between the double staircase that leads from the tower to the loopholes on the ramparts. In this center aisle floors are openings that provide a connection to the floor above, and for ventilation. Before you reach the terrace on the symmetrical stairs, you come to another vaulted part, narrower than the first floor, which winds its way around the inside of the tower. There are windows that open onto the first floor down.

Also on this floor security measures had been taken: covered openings to pour out boiling water were used from this height. Also spy openings were installed for defense purposes. On this floating floor is the open terrace, surrounded by large spaces. These rooms are equipped as the first floor, with two by two arranged spy openings. The opening of the large cistern that supplied the tower with water, occupies the center of this top floor. This reservoir is at the octagonal pillars, which forms the center of the tower. The angle upcoming double staircase abuts the northwest side of the roof to the terrace. The opening in the center is in the form of a gap. Small stairs on the east and on the west façade lead to the upper battlements. The sunlight that the tower gets from above, extends to the 1st floor.

A seven-line inscription, attached to the south side of the tower, praises Sultan Alaeddin Keykubad and referred to him as the ruler of the peoples, the Sultan of Sultans, defenders of the law, the Sultan of the country, two seas and the protector of Muslims.

The famous Turkish explorer Evliya Çelebi, who came to Alanya in 1671, describes the tower in his travel books, noting that it had a capacity of 2.000 people. The tower was guarded around the clock by 40 guards under the command of an officer.

Between 1951 and 1953, the tower was successfully restored by experts and is open to visitors since 1979. The 1st floor has been converted into a museum for ethnological treasures, showing the character of Alanya, so old tools, weapons and other things from the time of the Ottoman Empire are shown.

Alanya Castle and the Red Tower are frequented by lot of tourists. The Red Tower was once displayed on the 250.000.- TL bank note, but now is no longer in circulation due to the introduction of the new Turkish Lira (TL).