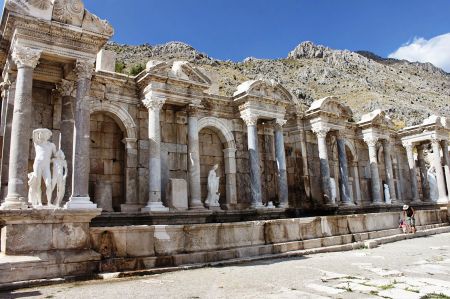 Leaving Antalya towards Burdur and Isparta on the 650/350 road, you will reach the fork for Korkutelli or Termessos after about 11 kilometers.

Sagalassos - first settlement from around the year 1400 BC

The city ruins of Sagalassos begin picturesquely and with a beautiful view of the plain of Aglasun located after about 7 kilometres towards Ak Dag at 1,450 to 1,700 meters altitude. Traces of human collectors and hunters can be traced back to the 12th millennium, the traces and remains of the first settlements at Sagalassos go back to about 3,000 BC, in Hittite writings from the years 1400 BC, the place is called Salawassa. Around 1600 BC, Sagalassos belonged to the province of Pisidia. In the year 334 BC, despite considerable resistance, Alexander the Great, defeated the city with more than 500 deaths (according to legend) and spared it from its heroic resistance to total destruction. Under Alexander, the city became increasingly important and during the Hellenistic period between the years 333-25 BC, Sagalassos was the second most important city in Pisidia. 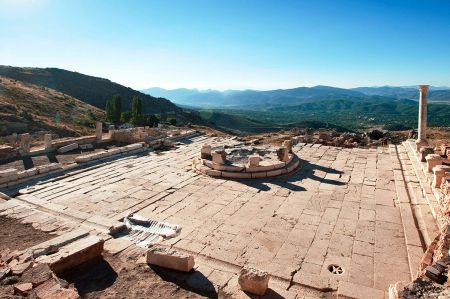 Among the Romans, who took over the city in 25 BC and assigned to the province of Galatia under Emperor Augustus, the prosperity and thus the importance of Sagalassos continued to grow. As in a golden age, the citizens of the city experienced prosperity and wealth, reflected in their buildings. In late antiquity, Sagalassos had a significant Christian church, which produced some important bishops.

In 518, a powerful earthquake brought a sudden end to the pleasant life in the city. It was rebuilt partially destroyed houses and public buildings, however, the end of the city Sagalassos came as early as the 7th century when another earthquake destroyed the water supply and its sources. Unfortunately, huge landslides from Mount Ak Dag caused further destruction of the city, so that it was finally abandoned and almost forgotten.

Only in the 17th century did the French traveler Paul Lucas come to Sagalassos and describe the city with enthusiasm. But only the Briton Francis Arundell was able to identify the city with Sagalassos through minor excavations. A team of English historians and diggers, led by Stephen Mitchell, began work on excavation in 1985, which was then commissioned by the Belgian archaeologist Prof. Dr. Marc Waelkens were continued. It was only through him that the importance of this city became clear in the past, for his excavations brought to light the ruins of the great theater, two agoras, a Doric antient temple and a Christian basilica. Later, the archaeologists also excavated the city's boulevard (town hall). Magnificent mosaic floors, which were also uncovered, are reminiscent of the conversion to a church. In the further course of the excavations, the Hellenistic wells could be exposed again, which then also let fresh spring water gush forth.

If you visit the ancient city at the entrance parking lot, please be sure to hand over a map, as otherwise you will lose track quickly, as the terrain is so extensive, so plan approximately 3.5 hours for Sagalassos.