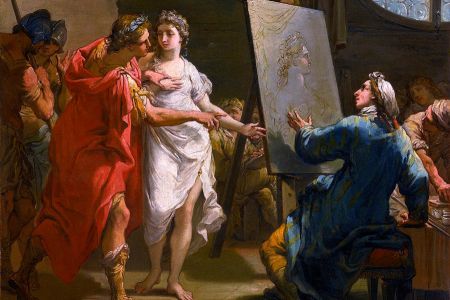 In our articles about the ancient city of Kolophon (located about 35 kilometers from Izmir on the way to Kusadasi) and its important citizens, we have already reported about the outstanding philosopher Xenophanes and the poet Mimnermos from the time of ancient Greece.

Another great name belonging to antiquity was that of the painter Apelles, who was also born in Colophon around 375 BC and was able to grow up there. 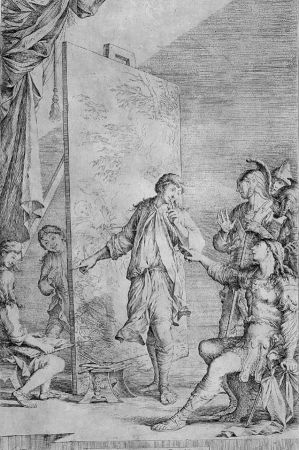 As a contemporary of Alexander the Great, Apelles was initially drawn to Ephesus, where he was trained in artistic painting by Ephorus of Ephesus and Pamphilus of Sicyon. In Philip's time, Apelle's path led to Macedonia after completing his education, where he met Alexander the Great and was given the privilege of portraying Alexander in pictures. In addition to Apelles, only the ore founder Lysippus and the sculptor Pyrgoteles received this privilege. Further paths in Apelle's life led him to Rhodes and Kos, but Ephesus was always so attractive that he spent many years there. Apelles spent more years in Alexandria at the court of Ptolemy, but then returned to Ephesus after the death of Alexander. Apelles died on the island of Kos towards the end of the 4th century.

Although none of Apelles' paintings have survived, his works of art are considered the pinnacle of ancient painting. Of course, the inclined reader then asks why Apelles was chosen as the master of his craft. The reason for this lies in the large number of literary records, which, however, exist in a traditional form. As the satirist Lucilius wrote:

In the work "Satyricon" by the satirist Petronius, he describes a painting by Apelles as follows:

"Moreover, the so-called man on one leg by Apelles made me almost sink in adoration. For the contours in the pictures were traced from life with such delicacy that one might have thought that the painting had also captured the mental processes. On the one hand the eagle abducted Ida's shepherd high in the air, on the other Hylas, radiantly beautiful, pushed back the importunate naiad. Apollon cursed his murderous hands and blessed his still relaxed lyre with the flower that had just emerged.”

Lucian reports on what is probably Apelle's best-known work, "The Slander", as follows: 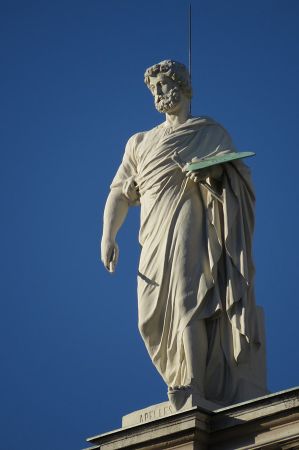 “On the right side of the picture sits a man with long ears, which are just a little short of being mistaken for Midas's ears. His hand is stretched out for the slander coming at him from the background. Next to him are two female figures that I see as Ignorance and Distrust. Slander approaches him from the left in the form of an exceedingly charming but heated and agitated girl, whose features and movements express rage and anger: in her left hand she holds a flaming torch; with her right hand she drags a young man by the hair, who stretches his hands to heaven and calls the gods to be witnesses. In front of her is a pale, ugly, piercing-eyed man who looks as if he has been emaciated by a long illness: everyone will see envy in him. Behind them are two female figures who persuade the slander and seem to dress it up and adorn it: these are - as the museum guide explained to me - cunning and deceit. At the very back follows a mourning figure in a black, torn robe: the remorse, who turns back weeping and, full of shame, looks at the approaching truth.”

Even by his closest rival, Protogenes, Apelle's works were highly praised for their grace and sensuous appeal, their flourishing coloring coupled with their scientific rigor and correctness of expression. The background of his basic Sicyonian training was clearly visible. Apelles is even said to have used the famous Phryne as a model for a portrait of Aphrodite emerging from the sea.

Especially during the Renaissance, some of Apelle's paintings were repeated by the great painters of the period because of the excellent descriptions. These include above all Botticelli, who copied the painting "The Slander" by Apelles, as well as Albrecht Dürer, who used motifs from Apelles in 1521 to paint the Great Council Chamber of the Nuremberg City Hall. Unfortunately, only fragments of this have survived. 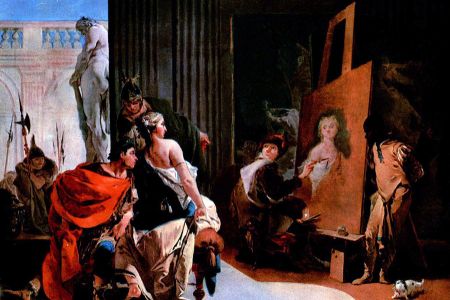 Supposedly, despite the use of only four main colors, white, red, yellow and black, with all their mixtures and nuances, Apelles was able to integrate deepened shadows in his paintings, which were then covered with a special varnish, giving more delicacy and delicacy to the paintings expressed.

Supposedly even the saying "Cobbler stick to your last" - which is still used today - goes back to Apelles. One of Apelle's peculiarities is said to have been the ability to eavesdrop on the conversations of viewers of his works by hiding behind his pictures. One day a shoemaker is said to have complained that an eyelet for the shoelace was missing on a painted shoe. After Apelles corrected the image, it was again the shoemaker who then criticized something on the thighs of the person depicted. Apelles then became angry and replied to the shoemaker that he could certainly judge the shoes, but that he was not allowed to judge anything about the shoe: "... ne supra crepidam sutor iudicaret ..." (Pliny the Elder), from which the commonly used idiom "Ne sutor ultra crepidam" developed.