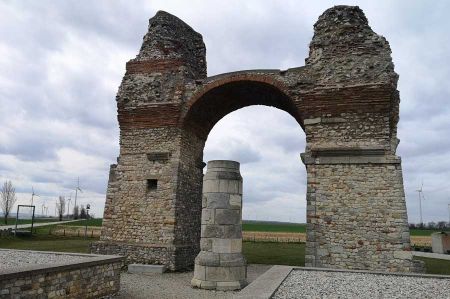 After an extensive tour through the amphitheatre and the gladiator school outside the civilian city of Carnuntum, we made our way to the Heidenor.

We had memorized the site plan with the location of the pagan gate fairly precisely, we even had taken some site map photos, but then estimated the distance as less. The Heidenor is located about 900 m south of the civil city of Carnuntum, far from the gates of the civil city. Archaeologists suspect that the pagan gate was built during the reign of Emperor Constantius II (AD 351–361). Fortunately, once at the country road to be crossed, the ruins of the pagan gate were visible. On the way back we recognized a better route, especially since the route we chose also led across train tracks. Better signage from the amphitheatre would have been desirable here. 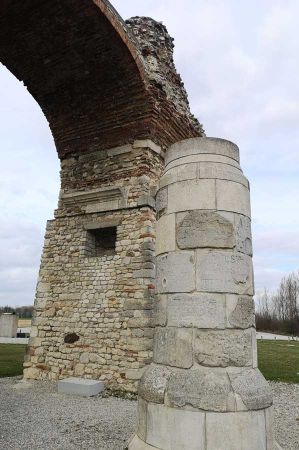 Around the entire region of Carnuntum there was once a Celtic settlement and power centre that has not been localized until today. From the 1st century AD this place became the gathering point for the expansion of the Romans into free Germania (Barbaricum). The subsequent rise of Carnuntum was closely related to its convenient location at the crossroads of two transcontinental trade routes, the Danube and the Amber Road. Carnuntum quickly developed into one of the most important areas of settlement and defence in the northern provinces of the Roman Empire. The remains of temporary Roman marchers were identified in the vicinity during geophysical surveys. Their chronological order had to be clarified by further archaeological excavations.

The evaluation of the excavation results and the analysis of its building structure showed that the monument belongs to the late Roman period and was not built before the middle of the 4th century AD. 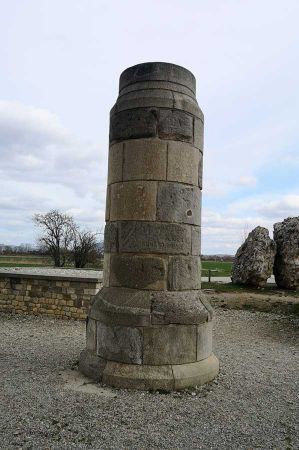 The composition of the finds also confirmed that the building site was mainly frequented in the late 4th and early 5th centuries. It would also be inconceivable that a holy altar built into the pagan gate of the head of the Roman pantheon, Jupiter Optimus Maximus, could be used for this before the Constantius ’II reign and the enactment of his anti-pagan laws (354 and 356). It is believed that the erection of the monument can be dated 60 to 80 years later, in the time of the reign of Emperor Constantius II, more precisely in the 350s. This is also pointed out in a text passage by Ammianus Marcellinus, in which it is mentioned that Constantius

"... at high cost triumphal arches ... erected on the river borders in Gaul and Pannonia and had inscriptions on his deeds affixed on them so that people should read about him as long as the monuments were standing."

This also coincided with the usurpation of Magnentius, AD 353; after his removal Constantius tried to restore the imperial unity. From 357 to 359 the emperor stayed in Sirmium, from where he led campaigns against the tribes of the Quads, Sarmatians and Limigantes. After their successful completion, he held a triumphal procession there and had repaired some of the castles on the middle Danube Limes. The construction of this victory monument was the last time for a striking sign of Rome's unrestricted power and invincibility found on this section of the highly competitive Pannonian Limes, in a period in which the Roman Empire was exposed to major changes in society and even worth dramatic political and military changes.

Imperial statue in the middle of the Quadrifron 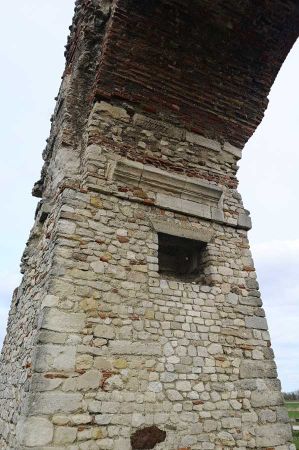 The pagan gate is a quadrifrons, a monument with double passages over four pillars. The outer dimensions were those of a cube with a side length of 14.5 meters. The mighty figure base in the centre of the pagan gate prevents an unhindered passage and suggests the interpretation as a triumphal monument. On the approx. 4.3 m high figure base there probably was a larger figure.

Likewise, the area around the Heidentor was probably only used as a deployment zone or for concentration of troops for border security or larger campaigns. It is also noteworthy that the monument was not placed directly on the edge of the Limes (via iuxta Danuvium) or on Bernsteinstrasse, but rather was built between these two very busy traffic routes. Until the early 5th century, Rome made great efforts to maintain the upper and middle Danube border. After the fall of the Western Roman Empire, legion camps and civil cities were abandoned and fell into disrepair. The buildings were demolished and their building materials were reused - stones from Carnuntum could even be found in the masonry of Vienna's St. Stephen's Cathedral. Due to the weathering of plant material that had been blown on for centuries, most of the remains of the foundations and walls were gradually covered; today's ground level is about one and a half meters above the ancient one. In contrast, the Pagan Gate remained widely visible over the centuries.