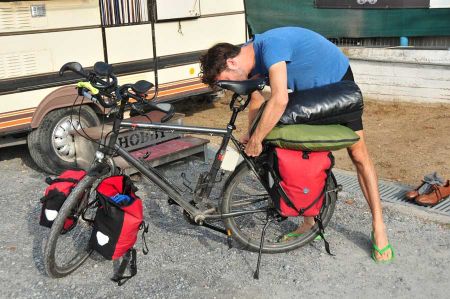 We had met Ephraim and Stephan after their arrival in Thessalonica at the Camper Stop Zampetas, quickly had got into conversation and not least had also talked about a route concept from Greece passing Macedonia and Albania to Montenegro.

The two were probably pleased with our route suggestions, because the next morning they first wanted to went by ferry from Perea to Thessalonica, from where the day's stage was planned in the direction of Edessa.

For those interested in cycling and plan a similar route, Ephraim and Stephan should roughly follow the course of the ancient Roman road Via Egnatia that once existed from Durres and Elbasan in Albania, passing Ohrid and Bitola in Macedonia to Edessa and Thessalonica in Greece. Ephraim and Stephan wanted to continue from Elbasan via Kruja and Shkoder in the direction of Budva in Montenegro, from where it should go by plane back to Germany. This tour through four countries they want to complete in about 12 days. One more reason to briefly deal with their bikes and their equipment.

Navigation on the move - Battery for mobile phone charging and lighting 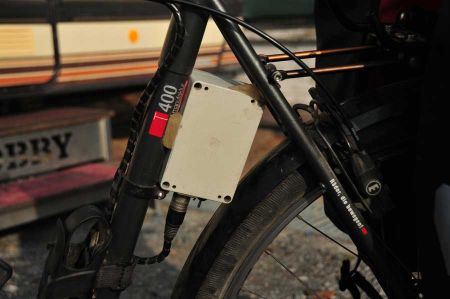 During their bike ride, Ephraim and Stephan use their smart phones for their bike navigation. Most of the batteries of smart phones, however, are very fast, usually already after 4 or 5 hours at the end of their performance. This is because you usually have to increase the display brightness when the smart phone is inserted into the bicycle cell phone holder in order to be able to recognize the routes. The use of the GPS receiver consumes a lot of energy, too. Many bike Navis rarely last more than 8 hours. But even then, power bottlenecks can arise. So how do you charge the smart phone on the go?

For the way and so that the devices always have enough power, there are solutions:
To generate electricity with the dynamo charging circuit on the way so that smart phones and navigation systems are always charged. The batteries or the battery bank can also be charged via a dynamo charger while driving. The idea is super-practical just perfect for all trekking bike cyclists. There are even models with a battery saving pack saving the energy after biking, by that the power supply is maintained even with short breaks.

Road bikes and mountain bikes have no dynamo to generate electricity.
However, if you need the bicycle lights at the same time as Ephraim and Stephan, it takes a lot more time or distance to get the batteries fully charged again.
The dynamo charging circuit, however, is more expensive than battery packs and there is a risk that the I-Phone or smart phone got current damage at wrong charging. In the case of the two, however, so far without problems. 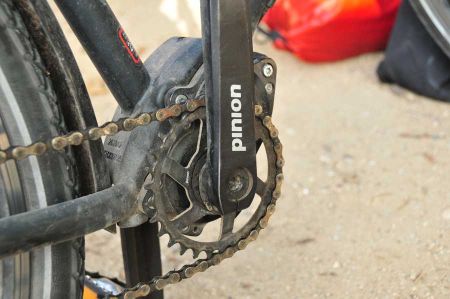 Who wants to go on a big journey, relies on the central gearshift, so do Ephraim and Stephan! Up to 18 extra-fine tuned gears, offering unsurpassed transition bandwidth and smoothly graded pitches. For years, the two have used the gear shift of Pinion, with best experience.
The Pinion transmission technology works on the basis of a spur gear with two successively connected partial transmissions. The individual gears are derived from the combination of the two partial transmissions with their different pairs of wheels.

These are graded into uniform and, depending on the type of transmission, for the respective application in ergonomically sensible switching steps. Gang overlaps are not available at Pinion. Also bad efficiencies or increased chain wear the Pinion transmission technology does not know. In addition, you can achieve translation bandwidths of more than 630%, so you can choose the perfect gear for every situation. 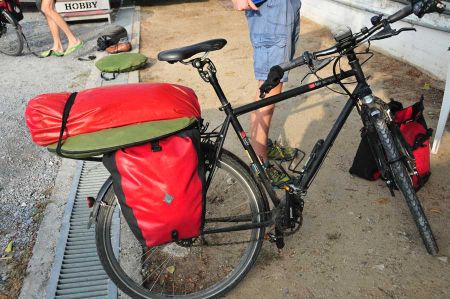 All gears can be switched through in sequence individually or in any gear steps. It does not matter if the bike rolls or stands. In ordinary hub gears, usually a larger number of components are in force. With Pinion, however, the power transmission takes place via two pairs of gears just. This technical feature ensures a consistently direct and lossless driving experience in every gear.

Whether steep climbs or long descents, the right gear can be found for every terrain! Even with luggage, thanks to the low center of gravity, the wheels of the two offer a unique driving dynamics, and have been for many years. As apart from an oil change after 10,000 km on the Pinion gearbox no further maintenance is required, you also travel extremely wear-resistant.

As far as a small digression in the bicycle technology of the two long-distance cyclists who are more than 100 kilometers a day on the road, even without e-support. It works, so Ephraim and Stephan, thanks to modern bicycle technology without.