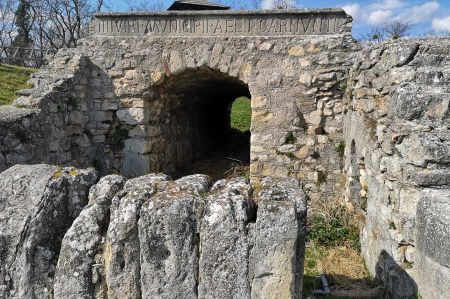 We had walked back from Heidentor along Heidentorgasse to the centre of Petronell-Carnuntum, then followed the signs to the military camp on the main road.

When we were almost at the end of the village and there were no more signs, we were a little curious about the military camp and returned to the parking lot. Maybe it was luck or “providence”, because that's how we came across the really old circular chapel “Saint John the Baptist”, located in a meadow just before the parking lot. We had already reported.

By car we went along the main street through the place, where we then followed Wiener Strasse, better the L 167, until we came across an empty parking lot and the military camp we were looking for. But if you suspect it to be near the actual place of Carnuntum, again not so surprising, rather the immense expansion of the Roman settlements here on site. From the parking lot it went down to the west gate of the amphitheatre. 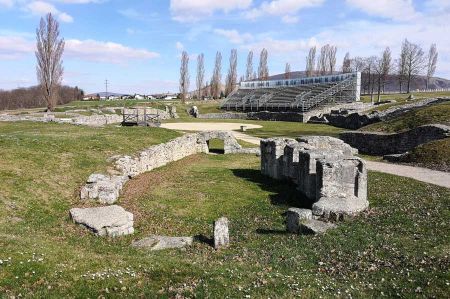 The first glance at the entire military complex, which was excavated, also showed its use today, so there was a small grandstand complex of modern design, which indicated Roman games. In the west gate itself we found a small niche, presumably to hold a statue of the gods, and on its north side a later added, U-shaped "animal kennel" (vivarium) consisting of twelve stone pillars with conical inlet grooves for bars still visible today. The space around the animal kennel was paved. Inside was a paved middle road. At the passage into the arena, the stone threshold and a bolt and a door pan hole were still recognizable.

Into the amphitheatre - gladiator fights in the arena? 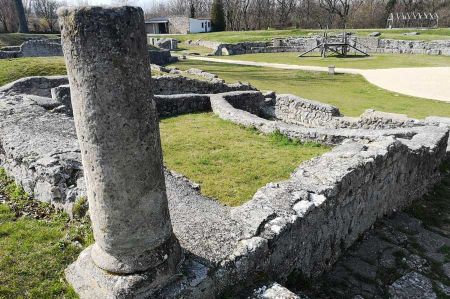 The military city's amphitheatre is the only Canabae archaeological site that can be visited in its entirety today. It is believed that this arena served primarily as a weapon training area for the legionnaires. But probably there were also gladiator fights (munera) and show hunts (venationes), presumably games specially arranged for the troops.

The early theatre was built in the second half of the 1st century and was completely made of wood, except for the substructures. This wooden structure was burned down in the 2nd century, maybe even according to a plan. According to a fragmented inscription from the legion camp, the stone amphitheatre was donated to the legion in the second half of the 2nd century by a certain Caius Domitius Zmaragdus from Antioch, councillor of the civil city and perhaps an army supplier. It was probably destroyed again at the beginning of the Marcoman wars. It was still in operation after its reconstruction until around 300 AD and had been repeatedly repaired until then (herringbone masonry) but was finally demolished in order to obtain building material for the renovation of the legionary camp under Valentinian. The wall structures that are visible today are all reconstructions that only emerged at the beginning of the 20th century.

Amphitheatre of considerable size in the military camp 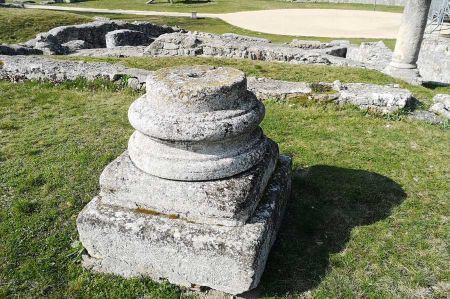 The 97.55 × 76.40 metres, multi-phase building stood about 110 meters away from the northeast side of the legion camp, just off Limes in a natural valley. It was approx. 14 meters lower than the legion camp and therefore did not restrict the view of the apron. The building had an elliptical floor plan oriented from east to west, the arena (cavea) measured 72 × 44 meters, the surrounding rows of seats offered space for 8000 spectators. As the square sank northwards towards the Danube, the outer wall had to be built a little higher there and reinforced with supporting pillars. The arena wall, consisting of quarry stones, was clad with hand-worked cuboids and originally painted red. It was connected by the spoke-shaped retaining walls to the outer wall and to the inner cave wall by radial or spoke-shaped walls that supported the seats of the wooden bleachers. The bottom row of seats was located directly on an earth fill. The higher ranks on a wooden structure could be reached via stairs. In front of her stood a wall made of cuboids, the so-called podium wall, which delimited the battlefield. Her blocks, connected with metal dovetail clips, were originally covered with a light whitewash and framed in colour. In addition to incrustation painting (imitation gemstones), which could be demonstrated on the remains of plastering, combat scenes were probably also shown on it. 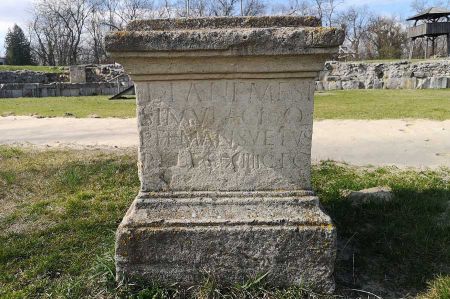 The floor of the arena was rammed earth; only a small section, presumably just later, had been paved with stone slabs. In the middle was a rectangular pool of water, which, provided with an overflow, could be drained through the north gate if necessary and was probably also used to clean the battlefield. The pool, which is now covered for safety reasons, is fed by a ring collector that is still functional and drains the rainwater too. The drainage channel consisted of clay pipes that led the wastewater directly into the Danube. It was covered with wood during the performances. There was another canal along the arena wall, which was also to drain the battlefield.

In the centre of the southern grandstand was the elaborately designed “Emperor's or Governor's Lodge” (pulpitum). It could be accessed via its own access. The two pillars were only brought there by the legion camp when the theatre was renovated in the 19th century. The box was probably only intended for particularly highly honoured guests of the games. Opposite her, directly above the north gate, was the one for the city magistrate of the civil city with stone benches. The inscription in honour of the four council members has been reconstructed. The north gate also served as a morgue, for the removal of animal carcasses and for the passage of the drainage canal.

The main entrances were to the east and west of the building. It was a three-part, lockable gate system that tapered like a funnel from outside to inside. They were designed in complex stone architecture, with a block weighing up to 750 kg. The spectators came from outside through so-called vomitoria into the amphitheatre. Traces of these stairways were found, among others, north of the east gate.