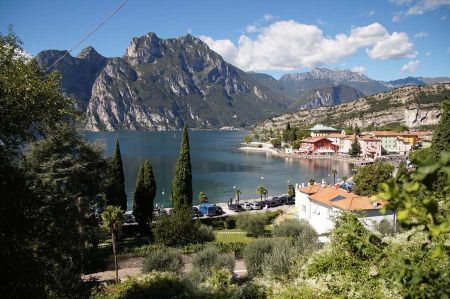 In the 50s, one of the first travel destinations for Germans with the beginning of the so-called economic boom was Lake Garda, one of the northern Italian lakes, which is also the largest lake in Italy.

Named in Italian in relation to the municipality of Garda on the east bank, its ancient name "Lacus benacus" was used for the period from around 200 BC. to 800 AD, a name that is said to be derived from an ancient deity named Benacus. 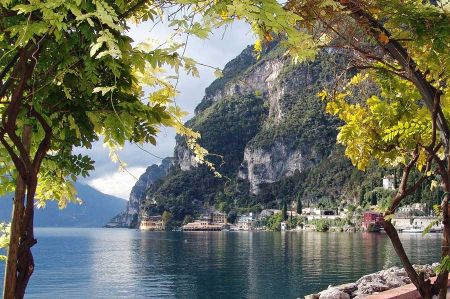 Numerous pile-dwelling settlements, which were built directly on the lake shore or in the immediate hinterland of Lake Garda, date from the Bronze Age. The first settlements on the lake shore date from around 2000 BC. Similar to the pile dwelling settlements on Lake Constance or Lake Ohrid in North Macedonia, people settled on the shores of the lake in order to improve the supply of drinking water and fish. The bank area, often swampy and difficult to reach, also offered protection from enemy attacks. The pile dwellings on Lake Garda have been a UNESCO World Heritage Site since 2011.

The most famous battle at Lacus Benacus was fought in November 268 on the shores of Lake Garda in northern Italy between the Alemanni and the Romans under Emperor Claudius Gothicus. The lake had already been used to station naval units, which were available for operations in the event of war. 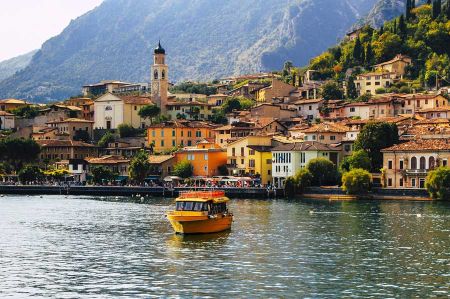 Under the ruling group of the Signorie, Lake Garda fell under the influence of the Scaliger between the 13th and 14th centuries, who built numerous castles, especially on the eastern and southern banks (Malcesine, Torri del Benaco, Lazise and Sirmione). In the 15th century, the lake and its banks became the scene of the struggle for supremacy in northern Italy between the Duchy of Milan under the Viscontis and the Republic of Venice. The transport of a Venetian fleet from the Adige Valley over the mountains to Torbole in 1439, a company called Galeas per montes by the Republic of Venice, counted as a military masterpiece. With the border on the Adda River established in the Peace of Lodi in 1454, Lake Garda finally fell under the influence of the Doge Republic. The latter in particular expanded Peschiera on the strategically important drain of the Mincio into a fortress, which was declared a World Heritage Site by UNESCO in 2017.

On the history of the development of Lake Garda 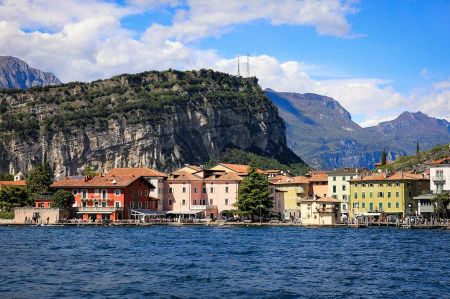 In the past Ice Age, Lake Garda was formed by a branch of the still imposing Adige Glacier, the traces of which can still be traced today, especially through the terminal moraines around the south bank, e.g. B. at Lonato del Garda, Solferino, Valeggio sul Mincio and Custoza.
Today Lake Garda is mainly fed by the Sarca river. This flows into the lake at the north end near Torbole. As Mincio, the river leaves Lake Garda at Peschiera del Garda and later flows into the Po. In addition to the total of 25 tributaries, there is also an artificial tributary in the form of the Etsch-Gardasee Tunnel, completed in 1959, the tunnel exit of which is at the southern exit of Torbole and which is opened in the event of a strong flood. 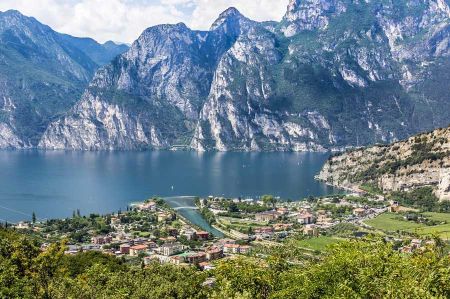 There are five islands in the lake, the largest, Isola del Garda with Villa Borghese, is located near Salò. About two kilometers south of it, also in the bay of Manerba and San Felice, is the Isola San Biagio, also known as "i Conigli". San Biagio is a popular destination that can be reached by boat or on foot from the mainland (waist-deep or dry feet depending on the water level). Before Assenza (between Porto di Brenzone and Malcesine) is the Isola di Trimelone, but this is a restricted military area. A little further north of Trimelone is the Isola del Sogno near Malcesine in the Val di Sogno and to the north of it the Isola dell’Olivo.
The northern shore of the lake is bordered by two thousand meter peaks of the Garda mountains such as Monte Baldo; the southern bank is already in the northern Italian plain.

Tourism and viticulture on Lake Garda 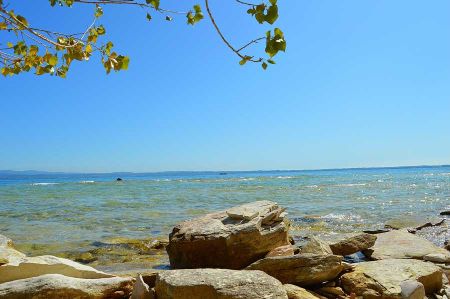 In the immediate vicinity of the lake there are still well-known wine-growing areas:
The Lugana area is located south of Desenzano del Garda
To the east of Lake Garda are the areas of Bardolino and Soave wine
Also to the east (between Lake Garda and Verona) lies the Valpolicella area

Today Lake Garda is again a popular travel destination. There are numerous hotels, guest houses, holiday apartments and campsites around the lake. Most of the holiday homes are open from late March to early October. The main season is July and especially August. Most hotels, cafes and restaurants are closed during the winter months. In 2018 alone, there were 24 million overnight stays on the shore.

On the south bank of the lake there are numerous amusement parks such as Gardaland or Canevaworld, with the north bank particularly popular with climbers, mountain bikers and surfers.