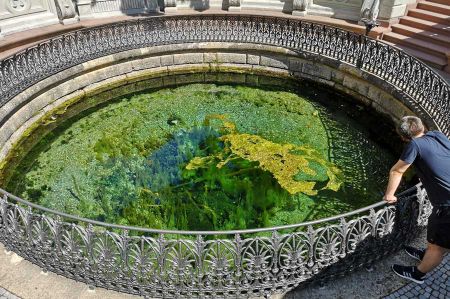 Since the settlement of man, sources of water have played a significant role in supplying human settlements with fresh water.

No wonder, then, that just by their size or by their location at the beginning of a significant river, they had a mythological significance too, as is evidenced in numerous spring sanctuaries or in the worship of spring nymphs. This was the case with the source of the mightiest river in the former Roman Empire, at least that is how Tacitus describes it. The Danube emanates from the soft, gently elevated ridges of the Abnoba Mountains and the Romans seem to have seen the origin under the care of the goddess of the mountain forest Abnoba, as a source and river deity. 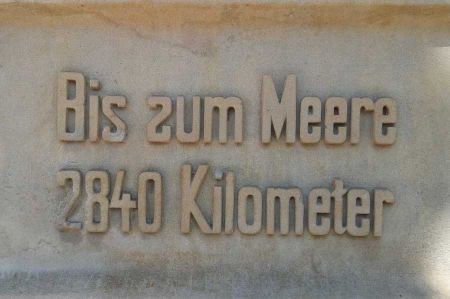 The mythology and the importance of the Danube's origin also contributes to the ongoing dispute about the actual origin of the river, although fortunately today for tourism reasons. Towns or cities like to adorn themselves with the special predicates "source" or "origin". As if there were no more important topics to discuss about.

The source of the Danube creek in Donaueschingen 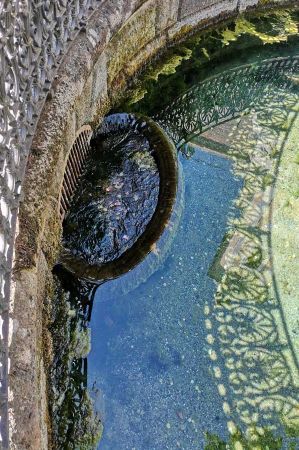 Once on the road in the region, we had also followed the signs to the source of the Danube, had parked our vehicle on the outskirts and were then heading towards the city center. It was not too long to search, because a large number of tourist guests had also followed the signs and gathered around the large spring pool. Interesting the linguistic confusion, because here were not predominantly Asians as onlookers to be found, quite the opposite, visitors from the Balkans were clearly in the majority.

The Danube creek rises in the Princely Fürstenberg castle garden in Donaueschingen at a corner of the castle in an artistically composed karst-spring-source, not, as perhaps suspected, somewhere in the free, idyllic nature. Of course, such a well-known river origin also belongs structurally to an area. However, the water immediately disappears underground again to flow into an underground run in the Brigach after about 100 meters, which about 1.4 km further combines with the Breg to the Danube. The source of the Danube River is just one of 22 sources in the vicinity of the confluence, which feed on above seeped water of the Danube spring rivers and leachate precipitation of the karst limestone hilly country of the Baar and pour together between 400 and 1000 l / s of water.

At least since the 15th century, the Danube source is considered the source of the Danube (Hartmann Schedel in his World Chronicle of 1493); but there are also indications that this was already seen like that at Roman times (Pliny the Elder in Naturalis Historia), where it was on the edge of the permanently populated area. In the oldest cartographic representation from the year 1538 by Sebastian Münster, the Danube creek spring with its at that time rectangular, approximately 8 × 6 m measuring source basin is recorded in signature paper.

Hydrological significance of the source of the Danube 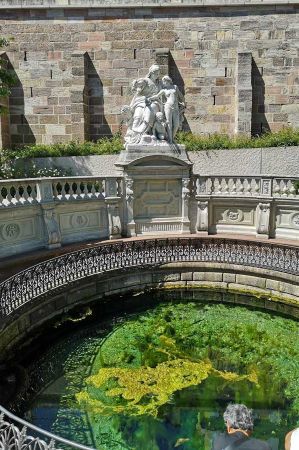 The water of rivers almost always accumulates from a barely manageable number of different sources, which gradually unite. The main strand of such a river system arises at the many points of union through the upstream, respectively larger river, and thus the source of the entire river too. A main strand is sometimes defined by other characteristics such as length, catchment area or a constant flow direction.

In contrast to the mythological role, the hydrological importance of the Danube springs is unusually low, since the Danube above and below Tuttlingen loses such a significant part of its water to the Rhine system that it completely dries most of the year, the so-called Danube sinking at Ulm - viewed from the point of view of the hydrology - to the tributary of the much waterier Iller and finally in Passau also surpassed by the Inn.

No matter, and anyway, we had seen the spring basin of the Danube creek, then wandered through the beautiful parkland of the Fürstenberg Palace Gardens, could watch a gray heron fishing and enjoy the fresh air in the park. What do we want more.