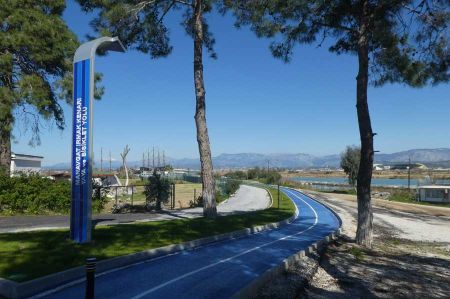 Despite all efforts, we can not continually review all of our articles for up-to-dateness, so we are always happy when attentive readers point out changes of relevance. Please understand this as a request for cooperation / notification, if you notice such serious changes.

This also happened due to our article on the Manavgat River, which once flowed in idyllic countryside past the former campsite Manavgat into the sea. Our reader Klaus has pointed out to us that meanwhile also some five-star hotels have sprung up, whereby a new street was built. Despite the accompanying urban sprawl, there is also something positive to report about this "progress": a combined foot-cycle path that leads from Sorgun into the city centre of Manavgat. Klaus also provided us with a small article with some pictures. But read his report:

Tour 6 - From Sorgun to Manavgat along the river 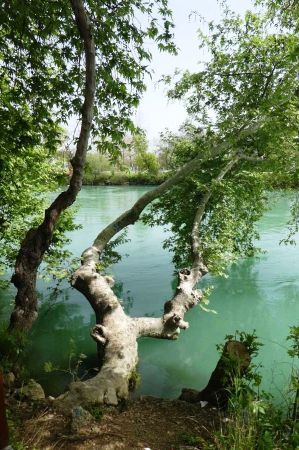 To get to the starting point at the Bogaz hotel or campsite in Sorgun, we use the city bus from Manavgat or Side to "Titriyengöl" to the final stop (son durak) opposite the new "Bosphorus Hotel" on the Manavgat River.
After getting off, we walk past the hotel "Bosporus" direction "Boğaz-Hotel" or campsite. On the right side there is a public picnic area, which is much and gladly used. Shortly before the end of this street before the entrance to the "Boğaz-Hotel" we turn left at a sharp angle and follow the paved road between the "Bosphorus Hotel" and the Manavgat River.
We simply follow this path, which is designed as a combined cycle and footpath. On the right we discover trout fishing.
The path initially runs between the newly built luxury hotels on the left and the lazily flowing river, whose green colour indicates a high lime content.

The river is at varying distances to the path. In some places it is worth leaving the path and going to the bank. Every now and then a tour boat passes by, often with many cheerful people dancing to disco music.
After passing the "Lake & River Hotel" on the left, the path turns sharply right and leads through a predominantly agricultural area.
Now the trail runs along the shore, separated from the river by dense bushes. We see a small pine forest in front of us, in which the restaurant "Kazan" is located directly on the river. If you want, you can stop here and enjoy a cup of tea or a refreshing drink with a small rest, watch the passing ships and the peace of the landscape. In the distance we can see the four minarets of the great mosque of Manavgat. By the way, the "Kazan" is known for its excellent grilled trout!
Now it is a bit up the hill, and after a right turn we already see the skyline of Manavgat. The terrain left and right of the path is not yet developed to the construction site of a residential complex (as of October 2017). We are now approaching the city and passing an amusement park on the left. After passing under the busy D 400 bypass, we reached the waterfront along the river that leads to the centre and beyond.

Continue into the city centre of Manavgat 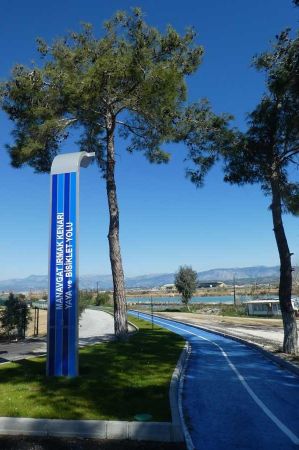 Noteworthy on the way is a ruin from Roman times, the "Zindan Kalesi" right on the river. It is a pretty dreamy place that invites you to linger.
Continue along the river with numerous cafes and restaurants until we reach the "Rauf-Denktas-Bridge", a pedestrian bridge that spans the river with a mighty arch. Again, there are numerous rest stops.
The last part of the bridge, which connects two parts of the city in the middle of Manavgat, is now only a few hundred meters away. Everywhere on both sides of the river there are numerous cafes and restaurants.
The route description ends at the bridge. If you want, you can also walk under the bridge. The path is beautifully landscaped. One of the highlights along this route is a newly built elegant pedestrian bridge. If you want to use it, you can easily turn back on the other side of the river.
On the main road you wait for bus or dolmus, which brings you back to the hotel or to your apartment.
Of course you can also go the described way vice versa. However, there are no rest stops near the bus terminal of the Titriyengöl buses, such as to the left and right of the river in the centre of Manavgat.
By the way, this way is also very good for cycling!
Distance about 7 km
Duration depending on the intermediate stays 2 hours.
Difficulty: easy

Source of the text and pictures Klaus Kaumanns

You like to see this route on google maps?