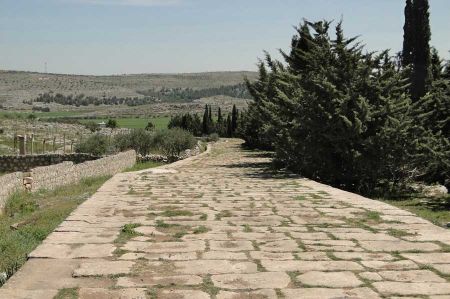 The empire of Alexander the Great had been passed to his diadochi and was divided among them, historically followed the Seleucids as the ruling dynasty, another great power of Mesopotamia.

In 83 BC the rest of the Seleucid Empire fell under the power of the King of Greater Armenia, Tigranes II the Great (95-55 BC), but his defeat against the Roman general Lucullus led to restitution under Antiochus XIII. Asiatikos (69-64). After his murder, Lucullus ’successor Pompey continued in the same year 64 BC the last king Philip II (65–64) and incorporated the Seleucid rump state into the Roman state: Antioch became the capital of the province of Syria.

Rise of Antioch to the metropolis of Rome 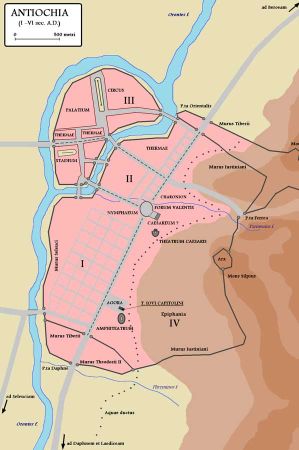 During the Roman Empire, Antioch grew rapidly, eventually numbering up to 500,000 inhabitants and, along with Rome, Alexandria and Carthage, was one of the most important cities of the empire. On campaigns against the Parthians and then the Persian Sassanid Empire, Roman emperors and generals stayed in Antioch several times, for example

In this respect, the city could even feel like a temporary “capital”.

The Orontes with its water forms the basis of the settlement 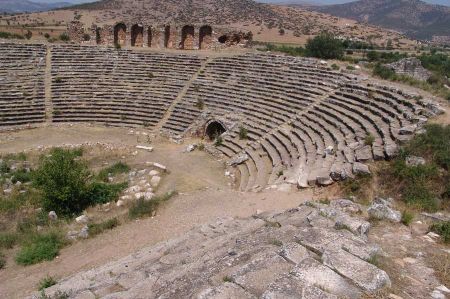 In Turkey, the river Orontes is also called Ters akan nehir, which means "wrongly flowing river". The historian Strabo stated in his Geographika that the Syrian river Typhon was called Orontes because Orontes I once crossed this river, probably during the war against Euagoras I of Salamis. Before that, the river was known by the names Typhon, Drakon and Ophites. These names, which mean snake in ancient Greek, go back to a local legend. The river was called Pharphar in Franconia (according to 2 Kings 5.12 EU).

According to Strabo, the first dams for damming the water of the Orontes were already built by the Egyptians. The dam at Qattinah, which dams Lake Homs, dates back to Roman times, but is still in use today. The Orontes is described by Pliny and Strabo.
The Battle of Kadesch in 1274 BC is known as the Battle of the Orontes between Ramses II. and the Hittite king Muwatalli II. Or the battle in 94 BC between the Seleucids Antiochus XI. and Antiochus X. Eusebes.
In the Dionysiaka of Nonnos of Panopolis it is reported in the 17th song that on Dionysus' journey to India there was a battle with Orontes, the son-in-law of the Indianking Deriades. In the fight against the god Orontes falls into the river that bears his name due to him.

Imperial residence, a magnificent theater and the hippodrome 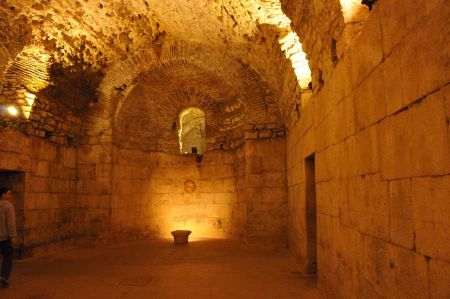 In the 1st century a large hippodrome (horse racing track) was built on the Orontes Island, so much important river with its water resources. The city's temple of Tychet is minted on a bronze coin worth 8 Assaria at the time of Emperor Volusianus. The river god Orontes is shown below the statue of Tyche in the temple. From around 285 AD onwards, Emperor Diocletian, with whom late antiquity began, had a permanent residence, a palatium, built next to it. A columned road ran from the center of the island to the palace. Its entrance was formed by a gate with four pillars, adorned with the representation of a triumph symbolized by an elephant quadriga. The palace is described in an eulogy by the rhetor Libanios in 360 AD (Orat. 11, 203-207), but changes in the meantime must be taken into account. This building complex resembled Diocletian's palace in Salona, which this emperor had built between around 298 and 305 AD as his retirement home; other imperial residences were in Trier, Milan, Sirmium and Thessaloniki. Caesar Constantius Gallus from 351 to 354 and Emperor Julian from 362 to 363 resided in the palace of Antioch. In both cases there were supply crises in the city, of which the crisis of 362/363 is particularly well known. Emperor Valens (364–378), who fought against the Persian Sassanids, also stayed in the city for a long time, just then Constantinople was able to finally assert itself as the capital of East Rome against Antioch.

The city also had a magnificent theater and an amphitheater at the foot of Mount Silphius, both of which were renovated by Gallus. There was also street lighting (Libanios, Orat. 11, 267), which, according to Ammianus Marcellinus, a son of the city, “competed with the radiant brightness of the day” (14, 1, 9).

We have 627 guests and no members online